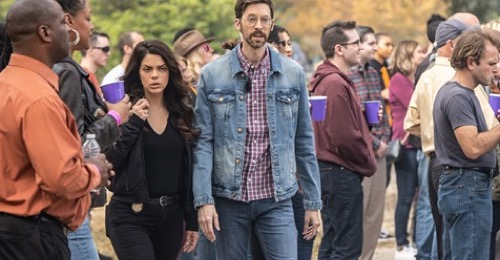 Also, Wade’s son begs her to allow him to go on a police ride-along for an article he’s writing on a youth outreach program at the NOPD.”

Pride has received a notification from an old friend. He learned that there a woman in the city named Julia Durand and this woman was dangerous. Wherever she goes, death follows. She was in the same city as three other individuals when they were assassinated and her latest victim was Navy. Navy Lt Brittany Simone was gunned down in London. She was working on the effects of sonar on marine life and she had nothing to do whatsoever with the other victims. There was no connection between them. They were all killed differently and each time Julia Durand was nearby.

She was in New Orleans now. She changed her appearance. She was blonde and now she’s a brunette and the social security to her official identification hadn’t existed three years ago. Julia was lying about her identity as well as her appearance. She couldn’t be trusted and so NCIS was asked to follow her. The team later searched her hotel room when she wasn’t there. They didn’t have to find anything and so they fell back on plan B. Pride tried to get close enough to see anything on her persons.

He pretended to be a drunk in the hallway. He “bumped” into her and he spotted several documents, but that’s not what concerned him. He also spotted a gun. He suspected Julia was already planning another assassination and he wanted to stop her from going through with her plan. The team surveilled her. They followed her to a bank where she accessed a security box and the box was in another name. It was also opened for three years. Julia’s whole plan seems to have started three years ago and Pride suspected it all began in New Orleans.

Her killing throughout Europe had to be a part of it in some way. The team watched her in her hotel room. They saw her reading Albanian and they translated it into English. The papers were apparently Simone’s research. The team hadn’t thought much about it when they first heard about the lieutenant’s murder and they didn’t see why Julia would be interested in now. The team continued to surveil her. They also followed up on her visit to the bank and they connected her banker to a company called Infinity Plastics that was located in Albania.

The team figured that had to mean something. They were investigating it and they were keeping an eye on Julia. The chance to stay in a car for hours also had Pride talking to Patton. Patton has seen how bad Pride has been looking lately and he thinks it has something to do with the mystery man from Pride’s dream. Pride keeps seeing the same man. He thinks it’s a buried memory and he doesn’t want to unearth it. He has this feeling that something bad would happen if he does. Pride wants to pretend like he hasn’t seen this man and Patton was worried.

Patton thinks Pride should confront the dream. He wants to go back to looking for the guy and he wants to support his friend because he sees Pride is struggling. Pride doesn’t want to ask for help. He thinks if he buries it long enough that it will go away and Patton is worried about him. Patton wants him to confront his problems. Pride doesn’t want to do that and so he asked him to focus on the case. Pride was being very much like Gregorio. Gregorio broke up with her girlfriend and she didn’t want to talk about it with anyone. She wanted to pretend like the relationship never existed.

Khoury pushed Gregorio to talk about it. She listened as Gregorio confessed to breaking up with her girlfriend because the girlfriend’s family was coming to town and she didn’t want to be introduced to them. Gregorio said it was a sign that Alyson was wanting something serious. Gregorio didn’t want that and so she ended the relationship before Alyson could break up with her. The women were discussing what Gregorio did want when they received word from Sebastian. Sebastian connected all three victims with Infinity Plastics.

All three victims were collecting evidence against the company. Julia looks like she killed them to get her hands on the evidence and yet she didn’t destroy them right away. She instead held onto them. Pride must have had a theory because he decided to confront Julia directly. He going to her when she spotted Gregorio and she pulled a gun on her. She demanded to know who she was. She was scared and Pride was quick to the scene. He was able to talk her down. He told her that they were NCIS and they asked her about her job.

She didn’t work for Infinity Plastics. She was working against them and the three victims were helping her. They were all collecting evidence against the company. The company had been dumping mercury into the water supply and it killed Julia’s son. She became obsessed with the company after that. She had a friend assist her with fake identification and she’s been hunting for proof against them ever since. Its been three years. “Julia” was hoping to bring the evidence to a journalist friend and that’s why she was back in town.

Only Julia believes the assassin followed her. She thinks she’s the next target and so the team decided to use that. They used Julia as bait. They followed her to her meeting with the journalist friend and they waited for the assassin to make her move. Unfortunately, the assassin got closer to their target than they would have liked but they were able to kill her and they saved someone’s life at the same time. Pride spoke to Julia after everything was done and he promised to get her evidence to the US Attorney.

She managed to push through her fear. Pride wanted to do that as well and so he decided to confront his own fear.

Gregorio did the same. She realized she does want to get serious one day and what’s stopping her in that she would want to introduce someone to her mom, but she doesn’t know if her mom will approve.

And Wade was out of the picture because she took part in a ride-along with her son and she ended up getting a date with a detective out of it.