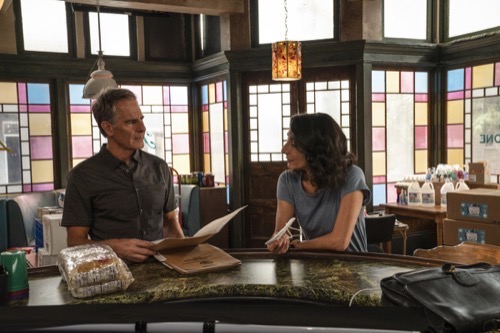 Also, Rita returns to New Orleans to surprise Pride, Wade helps a grieving woman who can’t find her brother who died from COVID-19, and Patton and his goddaughter get into a heated argument.”

The suspicious death of Naval Lt. Paula Cooke led the team to an offshore humanitarian ship. The ship was known as Good Hope and the charity it works under was known as Eternal Hope. Both the ship and the charity were given such an apt name because it does do incredible work. It provides medical aid to hard-hit countries. The ship even came back to New Orleans once they heard about the outbreak of the coronavirus there because they wanted to offer PPE as well as other medical necessities. However, someone set fire to those same supplies. The fire happened while both Gregorio and Carter were still onboard and so the agents believe the fire was deliberately set. Someone was trying to hide what was really going on on that ship.

The agents believe it’s connected to Cooke’s death. Cooke came on the ship to study their methods because the Navy wanted to incorporate some of that on their own ships and Cooke wasn’t there long before she had been murdered. Cooke was smashed in the face with a foreign object. She was then thrown overboard and someone even tried to clean up the blood afterward. It was the cleanup that first alerted the team that there was something wrong. They delved deeper into Cooke’s death because of it and that’s how they found out it was a murder. She had been murdered, but the team couldn’t figure out was why.

They thought they found the reason when they found a room full of sick people. It turns out some onboard were purposely hiding their sick friends so that the ship wouldn’t be stopped or quarantine and so that exposed everyone to Covid-19. Gregorio and Carter were both exposed. They’ve been on the ship since Day 1 and they were still stuck there trying to investigate the case. Their friends and their team were back on land. Sebastian was working out of the morgue like back in the old days and he was also helping out Wade. Wade’s office was filled beyond capacity because of the coronavirus. There were just too many bodies for her one office to work through.

Wade had to ask Sebastian if he could get her a cooler truck just for the additional space. There was also a young woman who came barging in because she was looking for a loved one who died and she couldn’t find him. His body has been misplaced. He wasn’t in the morgue. Wade had to call the hospital and a friend she knows that works there. She asked this friend to find the body. He said he might not have the time for it because he was working with new infections and still Wade pushed him to look because she reminded him that he could be sued over this. Dead bodies aren’t supposed to be lost. They needed to be transported to the morgue and properly handled.

Wade was dealing with that drama. The rest of the team was still dealing with theirs. They lost Darin Collinsworth and he was the one that claimed Eternal Hope was behind Cooke’s death. The team was also looking for the culprit. They still needed to solve who murdered their dead sailor and Eternal Hope was not helping. They blamed NCIS for the fire. They said if they had just been allowed to dock when they first came to port then maybe the hospital could have gotten the supplies and people wouldn’t be stuck on an infected ship. People on the ship were losing their minds as well. Gregorio and Carter were doing everything they could to keep the peace.

Rita was back in town. She quit her job in DC because she’s been pushing papers for the last two years and she no longer felt useful. She’s now back in NOLA. She’s helping Pride’s brother bring in supplies for personal hygiene and they were going to make sure the people who needed the most got it. Rita will also have to talk to Pride about the future of their relationship. Things are different now that she’s not rushing back to DC and so they will have to talk about it, but not just yet because they were both so busy and so that allowed Pride to focus on his case. He and his team had been given a file from Collinsworth. It listed numbers and names and people from Eternal Hope didn’t know any of it meant. And so the team had to figure it out on their own.

Khoury also found some new evidence. She learned that Collinsworth had a box of N95 masks hidden at his apartment and so the team came to suspect the fire that destroyed the supplies on the ship might have been set to destroy evidence of faulty items. They looked at any other evidence of this. They were looking by the time Wade found her body. She found a former professor who taught mortuary arts and it turns out he’s been collecting bodies that were being stacked up because he wanted them to have dignity in death. Wade had thought he was quack at first. She only realized she was wrong after she spoke to him and together they worked on reuniting a body with its loved ones.

Back on the case, Gregorio and Carter ran into a problem. They were investigating the new lead when they felt the ship move. A rogue passenger had locked out the crew and he had taken control of the ship. He wanted to bring it back to the mainland. He wanted to dock because he has a wife and kids and he wanted to be with them. Only he was forgetting that they’ve all been exposed. They couldn’t go back to the mainland because then there’s a chance they’ll be bringing the disease with them and it also hurt the investigation into Cooke’s murder. Her killer could easily slip out the moment they make it back to land.

The man now driving the ship didn’t even know what he was doing. He was a crane operator and he was more likely to crash the ship rather than dock it. Gregorio and Carter didn’t know what to do because the people had been locked out of the control room. Their best bet was to reason with their hostage-taker. Gregorio called him on his phone and she tried to reason with him. She told him that he could ram the ship into an oil tanker. He could kill them all because he didn’t know what he was doing and if by some miracle he managed to dock the ship – the coast guard would never allow anyone to disembark.

Gregorio was able to get through to Gustin. She got him to hand the ship back over to the captain and that allowed everyone to return to normal. Things were also changing back on the mainland. Pride was talking to the people who ran the charity and he found out someone had been cutting costs. They bought face masks at a cutdown price because they were just trying to save money. He spoke to one guy who admitted he bought the cheaper masks and that he didn’t know they were less effective until Cooke found out. Cooke wanted to reveal what was happening. She would have ruined the charity as a whole because of the scandal and so one of the doctors onboard killed her.

Pride got a name. He gave that name to Gregorio and Carter and the agents finally arrested their murderer, but this was not the end of Gregorio and Carter’s story. The agents still needed to quarantine afterward together. They were stuck together for two weeks while they waited for their results and then they’ll get to return to their team. Gregorio couldn’t wait because she was losing a lot of money in card games to Carter. And so they ended up bonding through this whole thing.

Wade’s case was the only one that didn’t quite stop after it was solved. She was still dealing with the overflow of bodies and so she learned to make her peace with it.

And after the case was wrapped up, Pride and Rita got to talking about the future of their relationship.