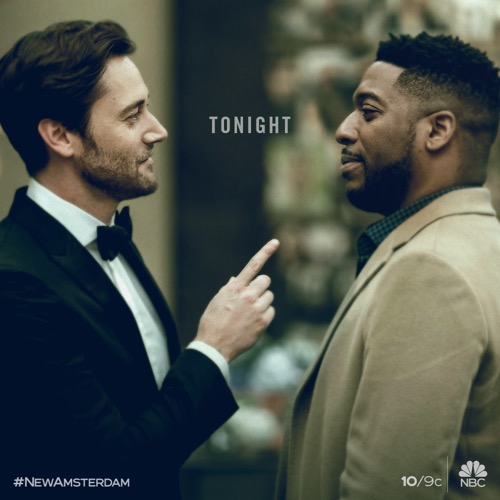 Tonight on NBC New Amsterdam airs with an all-new Tuesday, March 17, 2020, season 2 episode 17 called, “Liftoff,” and we have your New Amsterdam recap below. On tonight’s New Amsterdam season 2 episode 17 as per the NBC synopsis, “Max searches for a solution to crowdfunding after his eye-opening appearance in a viral “Go Fund Me” video. Reynolds takes his last laps at the hospital while Kapoor helps a former pilot deal with his life as a paraplegic.”

Iggy is with Danica, she has changed over the last two weeks. She only wants to stay in her room and doesn’t want to go to school. Iggy thinks she looks afraid. She says she can’t go to school because she can’t stop seeing Meghan will a whole in her head lying on the floor. Iggy speaks to her parents, they swear that there was no school shooting.

Laura had dinner with her mother and told her what she felt about being raised by a raging alcoholic, her mother remembers nothing. At that moment, she is served by a bailiff.

Floyd and Evie are walking down the hall, Helen passes by them and asks Floyd how big a going a party he wants, he says it is not happening. The bailiff then serves Floyd.

Max is walking down the hall, he is in a good mood, but it doesn’t last long. He finds out the hospital is being sued, George Whitney’s family is accusing them of malpractice and wrongful death. Every doctor who was in his care is being sued, just then the bailiff walks up to Max and serves him too.

Dr. Kapoor is performing surgery on a patient and when he inserts a needle, it breaks inside the patient. He says that it is logged in his left ventricle and if they don’t get it out he is going to have a heart attack. Dr. Kapoor leaves the OR and tells the team to take over. Dr. Kapoor is in his office, he firmly believes that the cat is causing bad luck for him.

Helen goes into a supply room and asks a nurse to get blankets when the nurse is gone, Helen changes the labels on IV bottles; she sabotages the trial.

Back to Iggy and Danica, she tells him that it happened in math class. She witnessed the man with the gun, he was shooting in the class besides hers over and over again. She saw Mehgan come from the bathroom, and the shooter shot her. Her teacher was shoving a table against the door, she was just standing there staring at Mehgan on the ground. The man stopped shooting, Mehgan got up, they said it was just a drill, a stupid drill. The man firing blanks and Mehan were part of it. She knows it wasn’t real but she feels scared all the time and she can’t go back there.

Evie is interviewing Laura for deposition prep. Four weeks ago a patient named George Whitney entered the hospital. Evie describes that George collapsed at a street fair, she asked him if he had allergies, he said no. Eight patients came in with the same symptoms. She claims she gave direct orders to Casey on what to give the patient, but the records show that he didn’t work that day.

Iggy goes to see the head of Danica’s school and tells her that he realizes that she is in a possible situation here but there are desktop programs that can assist with this rather than have drills.

Helen goes to see Dr. Kapoor and tells him that she abused Adderall for a while and she thinks it may have altered her memory, she is forgetting things. Details about a day that she shouldn’t forget a moment of. He says he sees her every day, he works with her every day, there is nothing there that concerns him. Her mother, on the other hand, is much more serious and she may never recover.

Next, Evie interviews Max. He says he was there on the day in questions as Medical Director, he countermanded Dr. Bloom’s order. So she was not at fault for carrying out an order that didn’t happen. She asks him if maybe what he diagnosed what was in haste. Evie says that where she sits, because he wears multiple hats, one of his patients died.

Iggy is at the school, in the gym and talking to the kids about the shooting drill. He asks the kids if they have had dreams/nightmares since the shooting drill, a lot of them respond yes. He continues to ask questions and unbelievably all the students have felt negative ways since the drill.

Helen goes to see Valentina and tells her she is not going to sabotage her anymore, she is going to help her because she saved Max and they all need him.

Next to be interviewed is Floyd. He tells her that he scrubbed in and they prepped him for surgery, he had a pre-existing condition to his heart. He says he was unstable with his blood pressure and they had to stable him right away. He died on the table, he had a stroke.

Evie asks Floyd if he decided to go more invasive once he learned that George Whitney was the one to release the botulism toxin at the middle east street fair. Floyd turns off the recording, then he says, next question.

Evie meets next with Ed, she tells him that he is not recording it, nobody is going to get in trouble, she just needs to know the truth. Ed tells his version of what happened, he double dosed him because he saw that he was a white supremacist. Ed said that he almost killed seven people and now they have to save his life. In surgery, Floyd tells Ed that they don’t judge people, they save lives. Evie thanks him and tells him that he can go.

Evie ‘s recommendation is that neither of the doctors caused the plaintiffs death, but if she puts any of them on the stand, the opposing attorney will tear them to shreds. They all made choices that would look suspicious to the jury. It will be a big payout, but the hospital needs to settle.

Vijay goes to see Ella and tells her that her cat cannot enter their home. He is an educator and modern, but wherever that cat goes, he causes bad luck. And the stress that he has caused has been unbearable. Ella says she doesn’t want him to feel that way but her cat brings her back to earth and helps her with her OCD. He asks her to change the cat’s name, Cowie is a sacred name associated with the bloody death of demons.

Danica is with Iggy, he continues to get over the stress of the shooter drill. He says he is sorry, for all the adults wanting the kids to help problems that they should be fixing. He says that she and her whole generation are blowing him away. He assures her that she will safe again, they all will.

Laura meets up with her mother, she says maybe they can start to make some new memories.

Valentina goes to see Max with Helen, she tells him that she has to resign, her study has been compromised. It’s entirely her fault, things fell through the cracks. He says they can work things out, start the trial again. She says no. Helen tells him she has to go somewhere else, people will be watching with scrutiny more than ever. Valentina says immediately. Max says ok, guess he has no choice.

Evie goes to see Floyd and asks him why he didn’t tell her the truth. He says whatever she thinks she knows, she doesn’t. We get a look back at the operating room, Floyd says that as a role model and a leader, he shouldn’t have said the things he did in the OR about the patient being a racist. She tells him that if he ever steps out of the truth again, she will seriously mess him up.

Max goes to see Helen and asks her about the theatrics earlier. She said she had to do it, she did it for him, everything she has done is for him. Max walks up closer to Helen, very close, he is turning the wedding ring on his finger, she turns around and leaves.