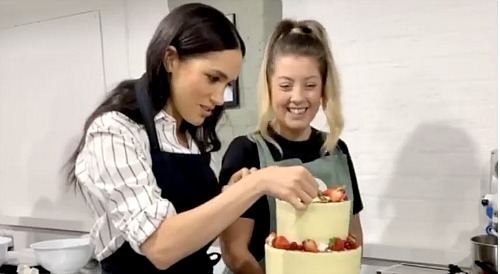 British royals news reveals some of Meghan Markle’s inner feelings when she was pregnant where the monarchy is concerned, and it isn’t positive. As royal watchers know, Prince Harry and Meghan Markle stepped back from their duties as senior royals this past spring, and they’re currently living in lockdown in a mansion in the Los Angeles area. And now, some shocking revelations are being made about how Meghan really felt while she was living as a royal.

New documents that are part of Meghan Markle’s lawsuit against Associated Newspapers have recently come to light, and they reveal some of what Meghan went through while she was still living in the UK as a senior member of the royal family.

Meghan is suing Associated Newspapers over the publication of parts of a private letter that she wrote to her father Thomas Markle after her wedding to Prince Harry.

What’s of interest here is that Meghan’s lawyers made some statements in court documents that reveal Meghan’s position toward the British media, and in so doing, they also revealed some of Meghan’s feelings about the royal family.

The documents stated generally that Meghan was the subject of numerous “false and damaging” articles by the media and by Associated Newspapers in particular “which caused tremendous emotional distress and damage to her mental health.”

And then came an interesting statement. The legal team stated the following: “As her friends had never seen her in this state before, they were rightly concerned for her welfare, specifically as she was pregnant, unprotected by the Institution, and prohibited from defending herself.”

This statement would seem to indicate that Meghan felt that she was unprotected by the royal family, and that the pressure was on for her to refrain from defending herself against the false and damaging allegations in the tabloids.

And at least one royal commentator – Russell Myers, speaking to Good Morning Britain – thinks that these statements are going to be very distressing to the royal family.

Meghan Markle is basically saying that the family left her vulnerable and miserable while she was pregnant, and that’s probably not going to go over well. In fact, it may leave the royal family scratching their heads wondering what they should have done to help.

At any rate, it’s sad that Meghan felt this way and especially during her pregnancy, but it does seem that she’s getting the opportunity to fight back now that she’s filed the lawsuit against one of the papers that she considers to be the worst offenders.

We’ll keep you updated on the lawsuit going forward, and especially on whether Meghan gets the justice she’s looking for. Be sure to check back here at CDL for more British royals news and updates.