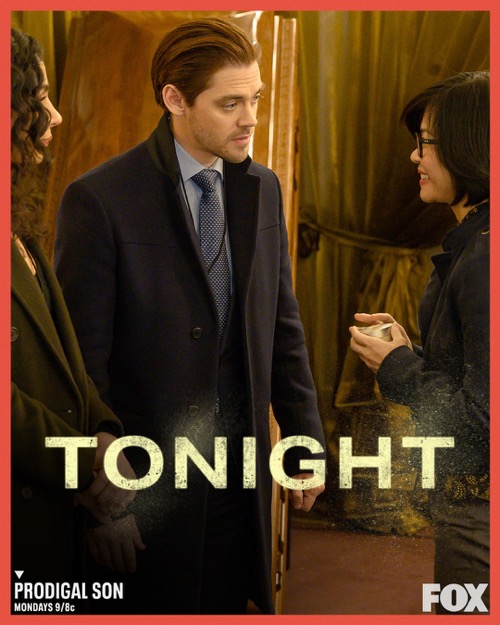 Tonight on FOX their new crime franchise Prodigal Son airs with an all-new Monday, February 17, 2020, episode and we have your Prodigal Son recap below.  On tonight’s Prodigal Son season 1 episode 15 called, “Death’s Door,” as per the FOX synopsis, “Jessica continues to search for more information on the “Girl in the Box,” but is confronted by the “When a body is found professionally preserved and embalmed, the NYPD teams up with Edrisa to go undercover at a convention of funeral directors.

While there, they discover their top suspects – morticians Tilda and Dev – who used to be in business with the victim. Then, enter the mind of a serial killer as Martin revisits his past through a series of hallucinations.”

Malcolm stands outside of his father’s hospital room door. Dani shows up to talk to him. He explains that his dad is in a coma and he is the health care proxy. They talk about whether or not his father is dreaming, Malcolm thinks he isn’t he’s in a coma. Meanwhile, it looks like Martin might be dreaming of the day he met the woman with the bracelet from the box.

Jessica insists on Gille that she stabbed Martin, not Malcolm. He explains that she needs a lawyer. Ainsley is with her. Malcolm comes in to hear Jessica say that she stabbed him once more. He would like a word. Jessica and Malcolm talk about what happened and Malcolm does not want her to take the fall. Malcolm gets called to her keys. Jessica gets a missed call from a contact on her phone named “the devil.”

Malcolm and the team arrive at the scene of the murder of an investor named Kevin. He is strangely posed on his couch, it looks as if he has been embalmed and the killer put makeup on him after posing him, facing the fireplace.

Jessica gets another call from the devil, a.k.a. sterling. He’s been looking for her, they talk about the carousel killer and the conversation turns to Jessica stabbing Martin. If Martin dies Jessica is looking at murder one.

Back at the office, Gillen Malcolm is informed that their victim was bombed and very professionally. They are looking for someone who took the time and has the knowledge. Meanwhile, Martin continues to dream about the girl with the bracelet in the box who he met at the park after she twisted her ankle running. He brought her home but was interrupted when Jessica returns. She isn’t going to the Hamptons after all.

The team meets up to go to a mortuary convention. Dani and Malcolm are paired up. She notices she’s been acting weird but she understands because his father is in the hospital. She talks about how she buried her dad at 16, becoming teary-eyed. She didn’t want to share that but since they’re trying to be friends. Malcolm doesn’t know what to say. Dani walks off.

Malcolm zeros in on a woman who worked with Kevin. Shockingly she is in the business of death. She admits that she was having a sexual relationship with Kevin but that was all. When Malcolm tells her that Kevin was involved she directs him and Dani to speak with their old partner Dev. Meanwhile, Gill is talking to Dev at the convention while he puts makeup on interested customers.

Sterling comes to visit Jessica. He wants to represent her. Malcolm learns that the foundation used on Kevin was Deb’s. When the team goes to find him they discover that he’s been murdered.

They realize that Devon is still alive his pulse is just very weak. They find a glass nearby. Edrisa determines that it is filled with toxins, it looks like the killer is already working on the embalming process. They determine that he needs alcohol to reverse the toxins. Using a syringe they inject him. He slowly comes back and they get him to the hospital.

Martin is still dreaming but it turns into a nightmare when he goes to the box to see his victim but she isn’t there. She’s upstairs making a phone call to have somebody come and get her. He confronts her telling her that this isn’t how it’s supposed to go. She turns on him and stabs him. She threatens him, telling him that she’s in his hand and she is going to kill his family. The boy dies first. Martin begins to flatline.

Gillen Malcolm has Tilda, the woman that was sleeping with Kevin, in the interrogation room. Malcolm talks to Tilda about how he doesn’t think she’s the killer but she might know who is. She admits that there was another partner, a silent one who was so good at her job embalming but she failed her psych evaluation so they could not hire her on the books. Their business caught on fire because the silent partner was working too late one night and she caused a chemical reaction will embalming. It appears she never moved on.

Malcolm calls to check on Edrisa. She acts strangely on the phone so Malcolm goes to see her and finds Leanne there with a gun. She wants to see Kevin one last time. Malcolm offers to bring her to see Kevin after Edrisa refuses. When they arrive, Malcolm tries to talk Leanne down when Edrisa wacks her with a metal tray. The team arrives just in time. Malcolm thanks Dani for talking to him about his dad.

Martin is still in his nightmare where the girl has taken a young Malcolm hostage. She wants to know why he put her in a box. Martin remembers that it’s his nightmare and he is the monster. Before he kills the girl he hears Malcolm’s voice and returns back to reality.