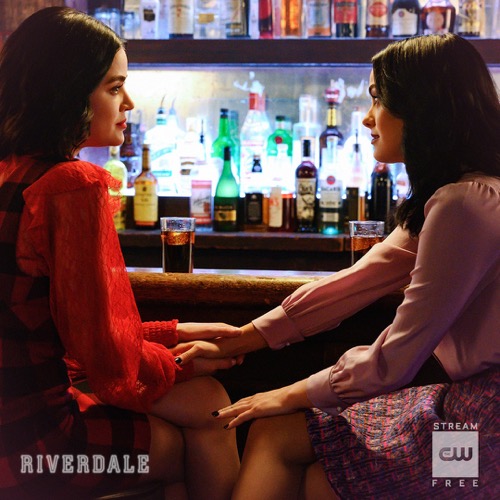 Tonight on CW their drama Riverdale airs with an all-new Wednesday, February 5, 2020, season 4 episode 12 called, “Chapter Sixty-Nine: Men Of Honor,” and we have your Riverdale recap below. On tonight’s Riverdale season 4 episode 12 as per the CW synopsis, “Archie grows concerned for Frank after someone from his past arrives in Riverdale. Betty and Alice’s investigation into incidents at Stonewall Prep leads them on a collision course with their number one suspect.

Jughead challenges Bret to a duel to settle their grievances, while Toni, Kevin, and Fangs seek revenge against Nick St. Clair, who has shown up unexpectedly in Riverdale. Finally, a trip to New York City gives Veronica an opportunity to catch up with her old friend Katy Keene.”

Bret and Jughead stand in front of the class. Their teacher suggests a duel of sorts between them. They each pick a partner. Jughead picks Donna.

Archie and his uncle Frank get a visit from an old friend of Archie’s uncle. He tells him that their friend Greg has died. Veronica tells her parents she is headed on a trip to New York. Coincidentally, they tell her they also have things to do in the city.

Alice and Betty are at school. Betty finds out she is suspended for 1 week and stripped of her position as an editor all because of Bret who now wants to file a restraining order. They head to the paper so Betty can take down her murder board for Mr. Chipping. She knows Bret is a psychopath.

Archie invites his uncle’s friend to stay the night. Betty and Alice get to work on the murder board at home. The next morning, Archie heads to school. Frank and his friend are in the kitchen. The friend attacks Frank out of nowhere. Archie comes in and stops it all. He came back luckily after forgetting his phone. Frank thinks a security company he and his friend worked for, who employed them as mercenaries, is trying to the up loose ends.

Alice and Betty sit down to talk with Chipping’s widow. Meanwhile, Archie calls F.P. to the house to tell him what happened. They plan to lure Ted to the gym.

Jughead and Weston begin their first duel of fencing as the class watches. Weston wins. Veronica meets up with her friend Katy Keene for some serious shopping. After they head to a dive bar Katy knows well.

Ted arrives at the gym. F.P. takes him in. Ted cannot believe Frank broke the code.

A young man comes into the Maple Club. He is shown around. Cheryl sees the newcomer and runs. He once assaulted her.

Betty and Alice talk to Moose who knows Bret. Moose tells them Bret blackmailed him over a sex tape. They head to Bret’s dorm. He catches them going through his things. Betty questions him about the sex tape. He might have one of her and Jughead too if she doesn’t leave.

Katy tells Veronica that her mom has cancer. They caught it late so they don’t know what will happen.

Frank says goodbye to Archie. He needs to go on the run until this is all over. Meanwhile, Cheryl confides in Toni about the man, Nick, at the Maple Club.

Jughead and Bret fight for their next duel. Jughead knocks him out cold in seconds, winning the match. Later, Jughead heads back to his room to find a dead snake pinned to his wall.

At home, Betty and Alice talk about how they can get the sex tape back if it exists.

F.P. calls Archie. Ted, his uncle’s friend, escaped from their custody. He warns Archie to get somewhere safe. But it is too late, Ted is behind him in the school bathroom. They fight. Archie takes a beating before he stabs him with the piece of a copper pipe he rips off the wall. Kevin comes in. They both run. Ted gets up and attacks Archie all through the hall, choking him until Frank knocks him out. He came back because he knew it wasn’t over.

Toni invites Nick into a more private room when he returns to the club. Back at school, Bret wants to bet Jughead for their last duel. If he loses, he wants Jughead to leave forever. They sit for a game of chess. While they play, Betty and Alice go looking for the tape. They find the tapes but are interrupted by Bret. He tells them all that those are confession tapes and his property. Betty is upset she got it wrong. They head back to continue the game. Jughead purposely blows the game. Bret asks why. Jughead is all set with Stonewall and him. He leaves with Betty and Alice.

Archie gets word that the Feds picked up Ted. He tells his uncle. They decide Frank needs to turn himself in.

Veronica’s mother shares that her dad has a neuromuscular disease. He is very sick but they caught it early. They both cry.

Nick wakes to Toni and the boys. Kevin is smiling mischievously. They warn him that they made a tape that will ruin his life but they won’t release it if he never assaults another woman again. He agrees he won’t step out of line again.

F.P. and Archie talk about Frank and how he is gone. They talk about his dad. Meanwhile, Veronica pulls it toggle before seeing her mom and dad. She tells them she is going to Barnard. She is also going to go back to her old last name. Her dad is thrilled. Betty and Jughead sit and talk. He has no regrets about throwing the match. Betty shares she did steal a tape labeled Donna. Her confession is about an affair with a man that doesn’t exist. She is a liar. She said the same about Chipping. She is the one they should be worried about not Bret, Betty tells Jughead.