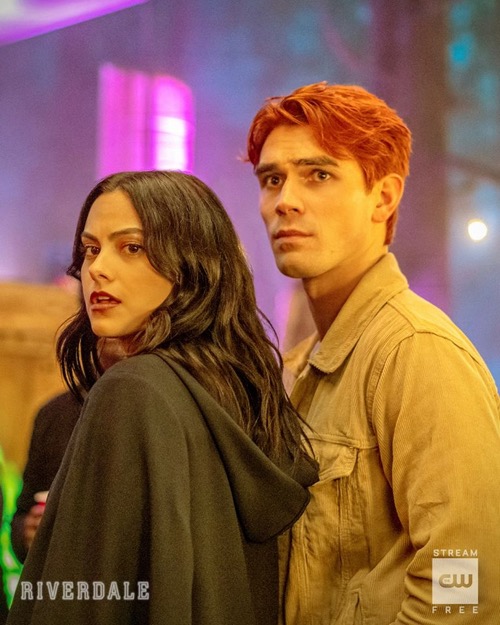 Tonight on CW their drama Riverdale airs with an all-new Wednesday, February 12, 2020, season 4 episode 13 called, “Chapter Seventy: The Ides of March,” and we have your Riverdale recap below. On tonight’s Riverdale season 4 episode 13 as per the CW synopsis, “Worried about what the future may hold for him after high school, Archie seeks advice from an unlikely source, Hiram Lodge.

Veronica begins to spiral after learning some devastating news about someone close to her. Accusations made against Jughead leaves his future at Stonewall Prep hanging in the balance.”

The week started normal for Jughead. But who would have ever guessed how it would end. Meanwhile, Archie isn’t given the best news by the principle. It is too late to walk at graduation with his peers. He hasn’t fulfilled his obligation academically and is too late to apply to college.

Veronica and Archie meet up after she tries to help her dad with his new euro problems. They spend some alone time together. After, she wonders about their future. All she really wants to do is focus on having fun. He agrees.

Jughead gets bad news. His work has been rejected and there is no way he can revise it in time. He calls Betty. They decide he can pull it off if he writes a prep school thriller.

Mr. Lodge shows up at the gym. He wants to train, he tells Archie. He explains to Archie that he has been behind a desk too long. Archie looks doubtful and unwelcoming.

Jughead reads his first chapter to the class. They doubt he can pull this off in time.

Cheryl sends TT to meet a woman named Rosa who is intrigued by the maple club. They make plans to meet the following night.

Jughead read the next chapter of his novel to the class. He talks of murder and mayhem, putting them on the edge of their seats. Back at the gym, Mr. lodge and Archie work out together. Archie talks to him about both of the businesses he is running and how it is tough. He thinks he needs to sell one. Later he meets with one of his dad’s friends to talk about it.

Back at school, Jughead is being accused of plagiarism. He tells the class that he has proof, the story is on his laptop. He runs to his room to get it but he cannot find it. His teacher tells him that he hast to go in front of the headmaster on Friday to plead his case.

Jughead is back at home talking to his dad and Betty about what the school is doing to him. Betty isn’t gonna let this happen. She has an idea.

Veronica gets caught with a flask from in his locker. She is approved by the principal well she hangs out with Archie and the others. Archie takes the blame. He gets a weeks detention and a call home.

Betty and Jughead head back to school with a lie detector test. None of his classmates want to take the test but Jughead does.

Archie is in lab when Veronica shows up. She starts kissing him and he gets a little annoyed. She hasn’t been acting herself and he doesn’t want to get in trouble. Her feelings get hurt so she leaves.

TT and Cheryl call Veronica. She meets them with Rosa who is her sister dressed up in a blonde wig. Veronica confronts her. Did their father put her up to this? She says he didn’t. She is also surprised Veronica knows about his condition.

Betty and Jughead search the school for his laptop. He finds his manuscript instead and it has been polished after he was told it was rejected. He confronts his teacher who shares that the school owns his work and the novel was polished by his classmates.

Archie finds Veronica. She shares that her dad is dying. He comforts her while she cries. He tells her not to give up on him.

Veronica gives her parents a presentation about her maple rum. She shares the plans she and Cheryl have. He congratulates her for waking the dragon. Her mother and sister get upset. She shares that she knows how to fire him up. Its the best he has been in days.

Betty meets with Donna to warn her that she is on to her. She knows all about her manipulating ways. Meanwhile, Jughead tells Brett about how he is going to use his novel to air all of the schools secrets. Brett threatens him. He has a tape of him and Betty and he will release it. Jughead doesn’t back down.

Archie sits with two of his dad’s friends. He is about to sign over the construction company but can’t do it. The buyer, Vic, gets upset.

At the hearing, Jughead tells them all he will leave. His dad is shocked. Betty too. Back at the gym, Archie tells Mr. Lodge he didn’t sell after all. Betty confronts Jughead about the tape. Brett and Donna interrupt to invite them to a party in the woods, one last party. Jug agrees to go. He has a plan he tells Betty later.

Archie tells Veronica finally that he isn’t graduating. He needs to go to summer school. She is supportive. Jug and Betty call about the prep school party. Veronica agrees she and Archie will be there. Jug grabs his Serpent jacket and some other things.

Jug arrives at the party. He and Brett go out into the woods. Betty sees Donna walking off alone and follows her. Betty confronts her. Her dad was the Black Hood and she isn’t backing down. Donna has been doing some research on her own. She knows all about the one word that makes Betty turn on her loved ones.

A bit later, Archie and Veronica find Betty in the woods standing near a pulseless Jughead.