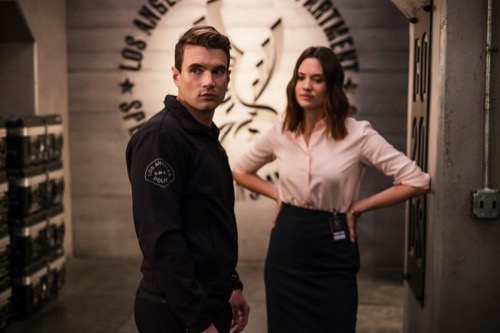 Tonight on CBS their new show S.W.A.T. inspired by the television series and feature film airs with an all-new Wednesday, January 29, 2019, episode and we have your S.W.A.T. recap below. On tonight’s S.W.A.T. season 3 episode 13 called “Ekitai Rashku” as per the CBS synopsis, “Hondo, Deacon, Tan and Commander Hicks engage in a manhunt across Tokyo when they escort an extradited fugitive to Japan, where he escapes local custody.

Back in Los Angeles, the rest of SWAT search for any contacts the criminal cultivated while hiding out in Los Angeles, and Street isolates himself from the team as he deals with family issues.”

SWAT takes out a criminal at a massage parlor. They head back to headquartered where they see Curtis. He is back and they are thrilled. They get word that they need to escort Esprit with the suspect back to Tokyo. Hondo says goodbye to his lady friend who isn’t happy. He explains he is just transporting a prisoner and will be back in 36 hours.

When the guys arrive in Tokyo they are told they need to surrender their weapons. They hand them over and head out for dinner. Meanwhile, the suspect they brought back escapes during transport. Esprit finds them to tell the guys. They want to help, reporting to their Japanese counterparts who had one of their own officers injured. Hondo makes friends with one of the wounded officer’s son. Thee Japanese Inspector tells them they can only observe. They head out with him to try and find their suspect.

They come across some gangsters who they want to take in but the Inspector tells them that is not how they do things here. They meet an informant who knows the suspect well but he wants them to get something for him – a bat he once owned that was stolen that was signed by a famous ballplayer. Hondo cannot even believe this is an actual request.

The Inspector and the guys head to find the suspect’s girlfriend who is a wrestler. They arrive at a club where she is wrestling. They are attacked by three female wrestlers, fighting their way through the club before they get the women under arrest. The girlfriend refuses to talk. They take her in. They follow a new lead to a house where they find several dead men. The Inspector checks one of the men’s phones. There are calls from his precinct on the phone. It looks like they have some dirty cops.

At home, Curtis and the gang manage to find track down the bat.

The Inspector gets word that there suspect is planning to find his boss and kill him at a local hotel. Hondo and the guys suit up and rush in as the gunfire starts. Just when they have their suspect cornered, he drops his gun and jumps from the top of the hotel, parachuting his way across the city. Deacon is shocked.

Back at home, the team learns that they have purchased a fake bat. A little boy has the real one. Curtis works to make a deal with the kid while in Tokyo the team gets the information they need from their informant. They head to the address they have been given, suited up and ready to get their suspect.

They enter the house, coming into a fight between their suspect and his enemies. The suspect runs. They finally get him outside after the Inspector tells him in Japanese to think about his loved one. He drops the gun.

Esprit and the guys say their goodbyes to the Inspector. Meanwhile, Curtis finally sees his brother. They make up. Jim and his girlfriend also make-up now that he knows he pushed her away and he shouldn’t have. Hondo videos his lady friend. He got her a souvenir and can’t wait to see her. He asks her to give him a FaceTime tour of Tokyo where she once lived. She is ready and happy he called.