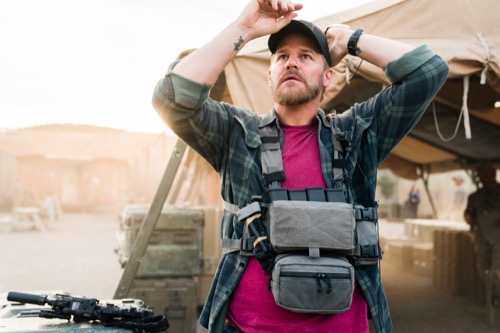 Tonight on CBS their new military drama Seal Team airs with an all-new Wednesday, May 6, 2020, episode and we have your Seal Team recap below. On tonight’s Seal Team season 4 episode 20 finale, “No Choice In Duty” as per the CBS synopsis, “Jason and Mandy visit a family of an informant who was killed in duty; Ray and the Bravo head out for a time-sensitive mission; Davis says the terrorist leader they are after is related to someone from Jason’s past.”

The team is still in Afghanistan. Their newest target is a terrorist who is hiding in the shadows. Ray points out to Jason that this is the second generation of a terrorist after they took out their targets father. Jason calls it just another target.

Later, Sunny arrives to re-join the team. Meanwhile, Davis snuck out of bed to go and read Intel reports. Her new love interest makes a joke that if he was a lesser man he would have a problem. Play video chats to this girlfriend. She asks when he’s going to leave the team for STA- 21 but he shows that he hasn’t told anyone yet.

Jason is thrilled to see Sunny. Sunny tells him that he’s learned his lesson and is ready to be a second-generation Seal. Jason tells him enough of the generation crap. They are warriors and he decides who stays on the bravo team.

Jason goes to check on Mandy. She is still devastated about their informant getting killed. She needs to head over to see the family so she can give them a check for 20,000. She knows it’s clearly not enough and is an insult but she needs to deliver the money. Mandy believes that Jason is just looking for a distraction when he accompanies her to deliver the money.

Sunny tracks down Davis on the site. She doesn’t look like she wants to talk to him until he tells her that he spent some time with his dad.

Jason and Mandy arrive to pay the family when they see men guarding the house. When they get to the door they are told that no men are allowed inside. Jason doesn’t want to let Mandy go alone but she insists.

At lunch, sunny looks like a high school kid trying to find the table he belongs to. Ray calls to him. They are quickly interrupted to head out on a mission after Davis believes she has found their terrorist. They’re going to have to head out without Jason.

Jason has to force Mandy out of the widow’s home after the widow begins yelling at her. Meanwhile, the team arrives outside of the home. They kick the doors in and make their way in to get their target. When they arrive inside they realize he has escaped through a tunnel on the floor.

Jason comforts Mandy after arriving on base. She doesn’t know when it happened but she either changed or the job changed her and she really doesn’t like the person she’s become. The team makes its way down into the tunnels. They are worried they’re going to be ambushed but they keep going in. Clay leads the way until Sunny notices a tripwire.

The team argues about if they should move forward or not in the tunnel. Sonny fights to move on so they let him lead. He crawls in to see if he can disable the wire. He keeps his hands steady as he cuts the wire. They are clear. They all move forward again. They come up to the enemy and step back after shots are fired.

Jason returns and is upset to learn the team is on a mission without him. Meanwhile, the team fights their way forward. Rocks come crashing down. The team is trapped. Davis and the team radio in that help are on the way.

Back at base, Jason is glad to see the team safe. Ray is recognized for his hard work and leadership. They all share a drink, celebrating.

Sunny finds Davis in her office. He thanks her for her hard work. Just then, Reiss arrives, Davis’ love interest. Sunny introduces himself before leaving.

Out by the fire, Clay tells Sunny this is probably his last deployment. Sunny doesn’t get explode. He learned a lot during his visit to Texas.

Jason tells Ray while they drink how he has always admired how he has handled his family and the team. Ray tells him he lied to his daughter though and he doesn’t want to do that again. He could never be Bravo 1. Jason doesn’t like what he is saying but doesn’t share that. He leaves and knocks on Mandy’s door. When she opens it, he kisses her and they shut the door.