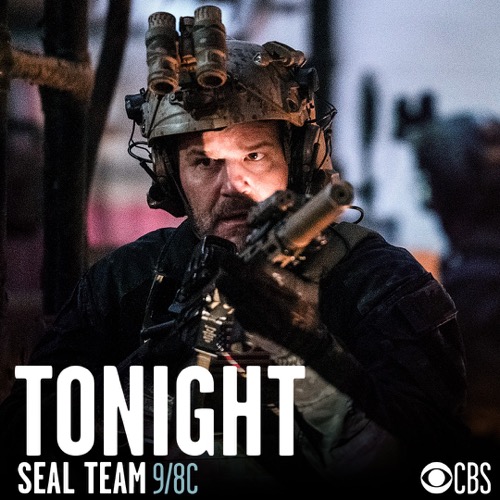 Tonight on CBS their new military drama Seal Team airs with an all-new Wednesday, March 25, 2020, episode and we have your Seal Team recap below. On tonight’s Seal Team season 4 episode 16, “Last Known Location,” as per the CBS synopsis, “Tensions flare on the home front, as Sonny faces disciplinary action, Clay considers a new career path and Jason faces pressure from Capt. Lindell to consider the next phase of his career, all while Bravo Team prepares for a three-month deployment in Afghanistan.”

Bravo team is on a mission when things become complicated and they can’t make their exit. After finally getting out they are on the road in a van when to enemy vehicles come at them. Their enemy is shooting at them while they drive as fast as they can. Blackburn radios for them to return to their last known location where they will be picked up. They continue to drive but can’t seem to get away from the enemy. Davis signals the exfoliate chopper, who comes in shooting, taking out the two enemy vehicles and then making a landing to pick up the Bravo team.

On their way home, the team talks about their traditional barbecue they’re planning on hosting tomorrow. They’re headed out on a mission for the next three months. Mikey is coming in to see Jason and he’s going to meet Natalie. Ray shares that he can’t make it because he has to move the family into the new house.

The next day, Mike calls and tells Jason he can’t come after all he’s headed to Minnesota because he made an All-Star team. Jason is very disappointed and Natalie picks up on those points out that it’s a good opportunity for Mikey. She doesn’t know how any of this pre-deployment works and she’s unsure about how they’re going to be for the next three months apart. Jason gets a call from his superior Lindell to come in and meet with him. When Jason arrives Sonny is there. They go into the meeting and learn that Sunny will be going to an armory school. After his bath stuff all over the guy that was stealing valor, this is how he will be disciplined. Jason had no idea about all of this and is as surprised as Sunny is.

In the locker room, Jason and Sunny go at it. Jason tells him that he is going to Texas and he will take his punishment and then he can come back after and rejoin the team.

At their pre-deployment barbecue, Sunny is letting off some steam about how he’s being disciplined. All of the guys try to explain to him that he just has to take his medicine and recharge. As the barbecue goes on, Sunny becomes more drunk and belligerent and calls out Clay. Maybe he’s the one that told their superior what happened at the bar. After going back-and-forth, clearly reveals that he might be leaving the team. He has an opportunity. Sunny throws cake at Clay and tells them to eat it. This team is nothing but a run on his ladder. Jason tells him to take a walk, he’s out of line.

Meanwhile, Lisa and Mandy are working on some things for the trip. Mandy tells her to take a break and if she’s not gonna do it tonight she needs to do it tomorrow night.

At the end of the barbecue, Jason pulls Clay aside and tells him that battles are won on the battlefield and not in the conference room. He doesn’t see him leaving and he hopes he doesn’t.

Really gets the bad news that a water main broke in their new home and he can’t move in with the girls before he leaves. His daughter gets very upset. Sunny tells Davis that he isn’t deploying with the team.

Davis starts to lecture Sonny who gets really upset and walks off. Jason goes to his superior to talk on Sunny’s behalf and about Clay’s possible advancement. They’re about to be shipped out to Afghanistan for three months and this isn’t helping his team at all. His superior tells him at the old ways will no longer be excepted and is a PR nightmare for him. Jason asks him if he’s looking for a promotion work wants to win the war. He tells Jason that he needs to accept this new reality.

Natalie comes to find Jason to see if he wants to have one last dinner out together. Mandy and Davis hit the gun range to blow off some steam. They talk about how devious is leaving for Afghanistan but Mandy is staying behind. She seems a little upset about that even if she’s not saying so.

Ray and his wife sit on the floor eating dinner there boxes packed up ready for the new house. He’s very upset that he isn’t going to be there to help her with all these problems.

At home, Clay and his girlfriend are spending one last night together. He’s a little distracted because of everything going on with Sunny. He also isn’t sure about moving on or staying. His girlfriend points out that if he stays in his current path he’ll be just like Jason Hayes.

Sunny shows up in Texas and is instantly miserable, surrounded by a bunch of young soldiers playing games. Jason is out eating dinner with Natalie. He tells her that after dinner he wants to hit the soft-serve joint after because that’s what he always does before he leaves on deployment. She makes a comment about him eating his veggies first and he becomes upset that she’s messing with his routine. He starts to vent about his superior and how he has basically been asked to step aside and his team is falling apart and now he’s headed to Afghanistan. She talks about how it is inevitable that he is going to have to step aside. He becomes so angry he gets up takes cash out of his wallet throws it on the table and leaves her sitting there.

Sunny’s driving down the road in Texas when he sees a man and his book tours off to the side at a house. He pulls off and rushes to the man’s aid. They make short, small talk that seems uncomfortable. It’s clear that he knows this man. He explains that he’s in town for training before walking off and saying goodbye to his dad.

Natalie comes to see Jason. She apologizes but explains that she is on his team. He explains that he needs to focus on team Bravo. She tries to stop him but he takes off.

Before they take off, Clay talks to his girlfriend. He has to figure out a way to tell the guys that he’s going to be moving on after this mission. Ray is a really hard time leaving his family behind. His daughter makes him promise that he won’t die in Afghanistan.