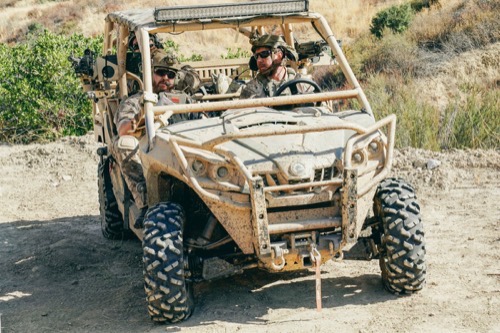 Tonight on CBS their new military drama Seal Team airs with an all-new Wednesday, December 9, 2020, episode and we have your Seal Team recap below. On tonight’s Seal Team season 4 episode 3, “The New Normal” as per the CBS synopsis, “Bravo Team struggles to adjust to a new team dynamic after several members make life-altering career decisions.”

BRAVO Team was the best of the best. BRAVO Team were the men and women who were sent in once the other teams failed and they always get the job done. However, BRAVO Team has undergone some changes. Jason stepped down as BRAVO 1. He stepped down because he realized he’s been doing this for over twenty years and if he didn’t step back then it was going to be him they shipped home next. Thirty was made BRAVO 1 in the meantime. He became BRAVO 1 because Ray and Clay weren’t around. Clay got into some trouble with Lindell and so he was riding a desk in punishment. Ray went away for training, but he’s back now and he’s glad to be home. His team missed him as well as Clay and Jason.

The team was not the same without those three. This could even explain why they were backsliding and they couldn’t reach goals during training. It wasn’t the new BRAVO 1. He was blamed for it and it still wasn’t his fault because comms had given them bad intelligence. Comms didn’t take in the wind data as they were navigating the team. It led to several mistakes and now BRAVO Team isn’t where it used to be. The other teams were hating on them. Lindell was also being a jerk about it and so Ray thought Jason should step in. He wanted the old team leader to step in to rouse the men. Give them a pep talk or something. Ray thought Jason could help turn things around for them and Jason refused to.

Jason said it wasn’t his job anymore to lift up BRAVO Team. He was working with ECHO Team now and, for some reason, Jason seems to believe that’s all the reason he needed to give up his old team. He wasn’t even getting drinks with them as much as he used to. He was missing out on drinks and cage fighting. Jason was doing his very best to ignore his old team. Sonny even has a theory about it. He thinks Jason is avoiding them because deep down Jason misses knocking down doors and he doesn’t want to be reminded of the good old days. Sonny told both Ray and Clay his theory. They also both shot it down because they said Jason is one of the lucky ones. Jason lived a very fulling career as BRAVO 1 and now he gets to be Chief Opps.

It wasn’t as scary as his other title. Jason did miss that part of the job because now he has nothing to frighten Emma’s new boyfriend with and so Jason did make it to drinks later. It was Ray’s welcome back party. The team was glad to see him and they finally got to tell him what they thought of Clay’s actions. The team was still upset that Clay sent that letter to Marsden’s family. They called it selfish and that made Ray feel bad enough to confess to the truth. He just told Sonny and Jason. He told that secretly it was him that sent the letter and Clay confessed to it in order to protect Ray and Ray’s promotion. Ray also has a family to support. He couldn’t afford to go down a pay grade and so Clay was the bigger man. And Ray was the selfish one because he put his own needs ahead of the team.

Ray was back with the team. Thirty used that to justify BRAVO getting a second chance for their training cycle and so drinks were cut short. They all wanted to be fresh faced for their second chance, but their chance was cut at the last minute because Ray was needed elsewhere. Ray received his first mission as a Warrant Officer Perry. He was being sent to Tunisia where a terrorist by the name of Ansar Al-Masar was running amok and the Agent running point on the case was Olivia Green. Not Mandy. Mandy wasn’t lying when she said she wanted to walk away and so that was another thing that has changed recently. And with Ray being sent overseas, Sonny tried to convince Clay to come back to BRAVO because he thought Lindell would have cooled down by now.

Clay was hyped up by Sonny. He thought he could talk man to man to Lindell and Lindell wasn’t hearing it. Lindell hasn’t cooled down. He was still angry with Clay. He was so angry that he told Clay that he might be operational again one day and that it wouldn’t be with BRAVO Team. Lindell isn’t allowing Clay to rejoin his friends. Clay gave up STA-21. He gave up the respect of many. He lost so much because he was just trying to be a good friend and now it doesn’t seem worth it. Clay has a lot a lot. He later told Sonny what Lindell told him and so Sonny went roaring to Ray because he was prepared to tell Ray what Clay wouldn’t. Clay shouldn’t be one being punished. It should be Ray and Ray was selfish for letting Clay take the blame.

Ray had been with Jason when Sonny confronted him. Both men were shocked to find out Clay wouldn’t be coming back to BRAVO and still Clay didn’t blame Ray for what happened. Clay said it was his decision. He’ll own up to it. He had tried to prevent a fight between Sonny and Ray and that just wasn’t possible. Sonny has been looking for someone to help uplift the team and Ray told him that he couldn’t keep blaming everyone besides himself for the team backsliding. Sonny told Ray that he detonated the team with one foot out the door and so just imagine how much more horrible things would be if Ray ever ran his own team. Ray couldn’t give Sonny the fight he was asking for because he had to go to Tunisia.

Ray apologized to Clay. He then had to leave and so Sonny went searching for salvation elsewhere. He went to the bar. He had a few drinks with Davis and Davis normally would have told Sonny about her promotion, but he was feeling so down. He didn’t want anything else to change and she didn’t want to hurt him. She also didn’t want to encourage him. She had a few drinks with him before she left and so he got to hang out with Clay. Clay reminded him that they were still brothers even if they weren’t teammates anymore. Ray was still a part of the team and Sonny was going to have to forgive him. Sonny realized this. Sonny also realized he wasn’t helping things by looking for a savior.

No one person makes a team. BRAVO works because they operate as a team and so Sonny was already going to forgive Ray when Ray became involved in a blast in Tunisia.