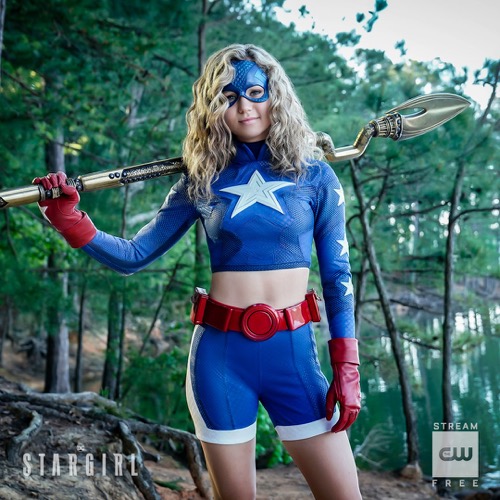 Tonight on the CW their new series Stargirl premieres with an all-new Tuesday, June 2, 2020, season 1 episode 3 and we have your Stargirl recap below. In tonight’s episode called, “Icicle,”  season 1 episode 3 as per the CW synopsis, “After a dangerous confrontation with a member of the Injustice Society of America, Pat warns Courtney to back down from her attempts to go after them.

But when she encounters what she believes to be a message from one of them, she urges Pat to help her. Meanwhile, Barbara makes strides at work, which impresses her new boss Jordan.”

Blue Valley Nebraska – Eight years ago – Jordan and his young son say goodbye to his dying wife. She makes him promise he will complete his mission. She dies right afterward. Do you want to go into the garden after to release his anger, creating a storm.

Present-day – Courtney comes out of her room, ready to go to school. She tells Cat she doesn’t need a ride. But she needs to figure out who the rest of the injustice society is. He wants her to be a normal teen but she wants to keep looking.

Brain Wave still lays in his hospital bed injured after his battle with Pat and Courtney. His son is there. Jordan peaks in from outside but doesn’t pay them a visit.

A businessman named William says goodbye to his family, telling his son Joey he will do great at school today with his magic tricks. His cell phone rings. It’s Jordan. He doesn’t answer telling his wife that everything is OK.

At school, Joey comes to say hi to Courtney and show her a trick or two before he shows them off at the talent show.

Pat pays Brainwave a visit to the hospital to make sure he still there. He doesn’t go in to speak with him because he is still in a coma. Meanwhile, Jordan visits William at his home to tell him what is going on. They talk about a girl who attacked Brainwave. Jordan tells him that he is back in charge now.

Pat, it’s called a pick Mike up at school after he gets in trouble. Pat decides it’s time for Mike to have responsibility. He’s getting a paper route.

Jordan is at work giving a speech about how he plans to make America great again wants to be at a time. He is starting with Blue valley. Barbara is there. He notices her after she mentions that there’s a small town used to have a theater.

After meeting a new boy in math class, Courtney walks home after school with a smile until she realizes she’s walking over a large star in the grass created out of frost. She makes a run for it.

Courtney arrives home to tell Pat what she saw. She thinks it is an icicle, the man who killed her father. They have to go after him. Pat disagrees but she keeps arguing. They head out to the field. Courtney is in her star girl costume while Pat is in his robot. Icicle shows up within seconds ready to fight. Courtney and Pat are separated but each holds their own. Were the punch, pet sense icicle through the air, and on top of the bridge. The bridge ices over causing a traveling school bus to hang off the edge.

Pat arrives to help and so does star girl Icicle shows up within seconds ready to fight. Courtney and Pat are separated but each holds their own. Were the punch, pet sense icicle through the air, and on top of the bridge. The bridge ices over causing a traveling school bus to hang off the edge. Pat arrives to help and so does Stargirl. Just when I think the incident is over, icicle blows a card out of Joey’s hand causing him to go and get it. Joey is run over by a truck.

William goes home to tell his wife what happened to their son. They both cry sterically while he gets a knife out of his safe and leaves. Back at the garage, Courtney cries while she talks about how sweet Joey was with Pat. He wants to show her something. He brings her to the headquarters of the justice society. He shows her around, showing her pictures of Wildcat and the rest of the superheroes.

He explains how they are all gone now because the injustice league killed them. Courtney wants to start a new justice society. He thinks it’s too dangerous to go on but she disagrees. This is their destiny. He shares that they’ll be no more fighting until he says so.

William arrives at Jordan’s and threatens him. Jordan freezes him when he threatens him with his sword. Jordan’s older parents see this and help get rid of William so he can hold a meeting. Barbara is there. At home, Pat, Courtney, and Mike eat family dinner.