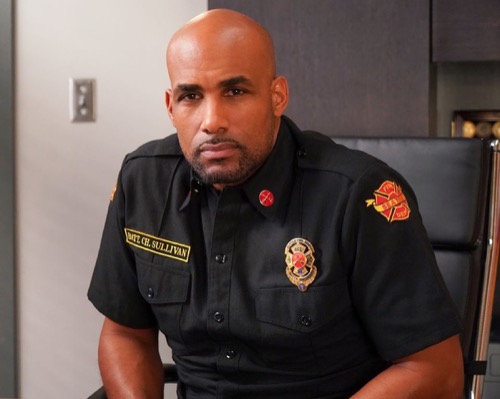 Tonight on ABC Station 19 returns with an all-new Thursday, March 5, 2020, season 3 episode 7 called, “Satellite Of Love” and we have your Station 19 recap below.  On tonight’s Station 19 Season 3 Episode 7 recap as per the ABC synopsis, “Ben’s doubt on Sullivan and the missing Fentanyl increases; Jack and Rigo try to overcome their differences as they work together.”

Tonight’s Station 19 season 3 episode 6 looks like it is going to be great and you won’t want to miss it.   While you’re waiting for our recap make sure to check out all our TV recaps, news, spoilers & more, right here!

Andy didn’t take her father’s news well. She fell apart after she heard he was dying. She started crying and she became a mess in front of everyone. Andy was later embarrassed at how she fell apart. She was ashamed she did it in front of everyone and she used Jack to help her get through it. The two moved into together as roommates. They were also sleeping with each other long after they both promised it would be one and done. Andy and Jack were playing with fire. They were using each other to get them over their individual humps.

Jack had had his own issues. He had slept with a fellow firefighter’s wife and the man found out about it. Rigo had confronted him at work. He even punched him while they were both still on duty and so that had to be addressed by their new captain. Maya asked them both to come into her office. She then demanded that they apologize to each other or she was going to kick this issue up the chain. She got both men to say they were sorry and Maya agreed to drop it. She wasn’t going to write them up. She was going to trust that they could work together and so put her faith in them.

Maya thought they could all be adults about it. Jack and Rigo both claimed they could work together and then they got called out to their first scene. It was so awkward that Vic asked if there was going to be an issue. Jack said there wasn’t and Rigo said he didn’t have a problem as long as the city kept paying him. The guys and the rest of the station were called out to an aircraft explosion. They got there and they didn’t an aircraft. They found a gas leak from a huge truck. The gas quickly ignited and it created this huge firepit the firefighters now have to deal with.

The team had left behind their newest addition. Emmett Dixon was added to their team as a probationary hire and everyone knew to take it easy on him because he was the new Fire Chief’s son. The man even received a promise from Sullivan himself. Sullivan promised to treat Emmett with kids gloves and unfortunately, he couldn’t really speak for the rest of the station. Emmett had gone out drinking and he had run into Montgomery. The two men had a one-night-stand. They didn’t think they would run into each other again and so Emmett coming to work at the station was a nasty surprise.

Montgomery made sure not to make it a thing. He responded to the call like everyone else and he tried to offer Maya some advice. Plenty of them tried to offer Maya advice. She refused to take any of it because she was sure she knew better and she needed to stop questioning her every decision. Maya was concerned oil leak would affect the gas station. If one of the vats went up, it could potentially take down the whole block and so Maya was thinking of the bigger picture. She ordered people about and she kept watch.

Maya was always watching. She sometimes questions herself and so she was watching to make sure everything comes together. She later watched as Vic traveled through the foam to get to the fire. Maya was monitoring the situation with a temperature scan and she pulled Vic from the scene the moment she lit up. Maya was dealing with the fire and she thought Sullivan was dealing with the station. Sullivan was actually getting high. He stole Fentanyl from the new Physician Response Team truck and he was off hallucinating while the new kid dealt with a homeless man that wandered in.

It’s literally what happened. Some homeless man wandered in and he began using the firehouse like his own private home. He took a shower. He made himself lunch. He even changed into some of the firefighter’s clothes and so Emmett had no idea what to do with him. He thought of calling the cops. The cops were the ones that recommended the homeless go to the station house and so the cops weren’t really an option. Emmett didn’t want to turn to a more senior firefighter because he didn’t want anyone to think he couldn’t handle the one man on his own. And yet his need to do the right thing overrode his pride.

Emmett went to Sullivan for help. He thought Sullivan would respond when he later knocked on the other man’s door and Emmett went in when he didn’t hear anything. He ended up finding Sullivan passed out on the floor. Emmett got an Emergency bag and he did his best to revive him. Only nothing he tried had worked. He had started to get worried and so he was about to call his father when Sullivan came to. Sullivan was fine. He had OD and that’s what Emmett treated him for. Emmett now knows his secret.

The rest of the team were still at the scene of the fire. Andy later learned that the “aircraft” was a rocket that went off and so she tried to warn the firefighters to clear the scene until the Hazmat team could get there, but Rigo ignored the orders. He ignored the orders because they came from Jack. Jack tried to stop him and Rigo ignored him to his own detriment. Rigo later got hurt because he refused to listen. He began bleeding out on the scene and so the new Physician Response Team moved in.

Ben and Pruitt (who now works with the PRT) moved Rigo in their fancy new truck. It was basically a hospital on wheels and they kept him alive until they could get him to the hospital. Jack blames himself for what happened. He thought he should have been keeping a better eye on Rigo and Andy told him it wasn’t his fault. She blamed Maya. She said Maya as the Captain was responsible for everything and she shouldn’t have put both men out there together. Andy has been questioning Maya the whole time.

Maya finally snapped. She reminded everyone that she was their captain that if they have a problem with it they could always transfer. Maya was done with being disrespected as well as questioned. Maya had had a rough day. She had been grumpy at first when her new girlfriend came by the station and thankfully Carina was able to get her mind off of it. Maya was making out with her new girlfriend when Sullivan went to Andy. He needed help and he asked if they could talk and she turned him down. She was angry at him for hiding the fact her dad was dying.

Andy didn’t know that Sullivan was going to tell her he’s an addict.

JJ meanwhile left Miller with the baby because she never planned on staying around and so now he’s a single parent.