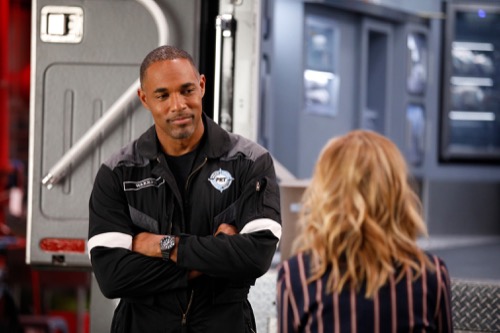 Tonight on ABC Station 19 returns with an all-new Thursday, April 2, 2020, season 3 episode 11 called, “No Days Off,” and we have your Station 19 recap below.  On tonight’s Station 19 Season 3 Episode 10 recap as per the ABC synopsis, “Andy and Sullivan are thrown into action when the restaurant is raided by the ICE; Travis joins an awkward lunch with Chief Dixon, Emmett, and his girlfriend; Surgeons from the Grey-Sloan Memorial are invited to see the new PRT vehicle.”

Tonight’s Station 19 season 3 episode 10 looks like it is going to be great and you won’t want to miss it.   While you’re waiting for our recap make sure to check out all our TV recaps, news, spoilers & more, right here!

Maya isn’t at the station. She left. She went on vacation. Her girlfriend convinced her that she needed a break and she really needed to get away after the whole Rigo thing. Rigo’s death had changed things for everyone at the station. Andy even realized she didn’t want to hide her relationship anymore and so she brought Sullivan to lunch with her dad. They both wanted to tell Pruitt that they were in love. They were in love and they were going to tell the department. They didn’t want to hide their relationship anymore.

The couple thought it would be easier if they first told Pruitt. He was against their relationship because he didn’t want his daughter to gain a reputation or for it to ruin her legacy and so telling him got them over their first hurdle. The couple took Pruitt out to lunch. They then dropped him with a truth bomb and he more or said “okay”. Not as in okay he was fine with it. It was more like “okay, what do you expect me to do”. Pruitt acted like he didn’t care and they didn’t get a reaction from him until they mentioned bringing in the department.

Pruitt didn’t know they were that serious. They were. Andy and Sullivan wanted to a future together and Andy told her dad it was like him and her mom. Only Pruitt got upset with her because it led back to an old argument. Pruitt told Andy that once again he didn’t derail her mother’s career with SFD and she hit back that yes he did because he got her pregnant. Her mother couldn’t exactly run into a fire nine months pregnant. She told her dad that and so they went back to being angry with each other. They were still fighting as Sullivan left to use the bathroom and came back with a story.

Sullivan said he spotted a grease fire in the kitchen. He had found the head chef was letting the place burn because he wanted to berate his staff and threaten them with ICE. Sullivan then stepped in. He told him he would report him for the fire hazard if he didn’t stop yelling at his staff and threatening them. Sullivan won that fight. The head chef back down and so Sullivan thought Andy and Pruitt would understand. He didn’t expect Pruitt would take ICE’s side. Pruitt went on and on about there were methods to becoming an American Citizen.

He didn’t think anyone should be in the country illegally. He began arguing about how it traced back to WWII and so Sullivan said he understood the situation because his grandfather was a Nazi. The Nazi thing threw both Pruitt and Andy. They hadn’t known that story and so they needed clarification on what he meant when he said his ancestor was a Nazi. He later told them the whole story. He told them how he grew up with a grandfather who lived with them and that his grandfather only spoke German.

Sullivan lived with him for another six years. He never once spoke to him after that day and so they lived in silence. Sullivan said it was easy for people to become evil. He hears the reports about the abuse going on at the detention centers and he said they were a sign of how today wasn’t that much different to the WWII days. Its why Sullivan tries to stand up when he sees injustice. He stood up for those people in the kitchen and he would do it again because he knew that was the right thing to do. Sullivan made Pruitt think.

Their lunch had taken an unexpected turn. They delved into things on a deeper mindset and they were talking about their own parts in the world as Montgomery was squirming because he had lunch with the new guy and his girlfriend. Chief Dixon had stopped by with his son’s girlfriend. They had lunch at the station and they invited Montgomery along. He didn’t really want to do it. He sort had to because it was his boss asking and so he sat down at lunch with the man he’s sleeping with and the man’s girlfriend.

Alicia even spoke with him alone. She’s been with Junior for six years and she wants to get married. She’s been waiting for him to ask her. He just doesn’t seem like he wants to and so she thought maybe she should ask him. Alicia ran past Montgomery. She told him how she wanted to spend the rest of her life with him and Montgomery told her that might not be possible. He lost his own husband because of the job. Being a firefighter is dangerous and he warned Alicia about it. There was going to be a chance she might lose her boyfriend and so she needed to make peace with it.

Montgomery also wasn’t the only one dealing with visitors. Ben needed a surgeon for his new Physician Response Team and he tried asking his friends. He went to Owen who kept going on about his days in Iraq. He went to Teddy who kept talking about her new baby and so finally Ben turned to Jackson. He was showing Jackson the ropes when Sullivan managed to get into trouble. Sullivan found out that ICE had shown up and so he chose to intervene again. This time he came with both Pruitt and Andy.

They helped some of the undocumented immigrants in the kitchen to getaway. There was one who couldn’t and so the trio claimed that he had suffered a burn. They called for Ben. Ben and Jackson showed up to take him to the hospital and so they got him away from ICE. Sullivan and Pruitt had felt glad about the part they played. They were even bonding over it. They knew that Ben and Jackson would help the guy get away and that’s what happened.

And later each and every firefighter was called in because they have a five-alarm fire happening, but Maya was still on vacation and so she had a mild panic attack being so far away.

And both Andy and Sullivan were heading into work when they began thinking about marriage and how great it would be if they got married in time for her dad to walk her down the aisle.