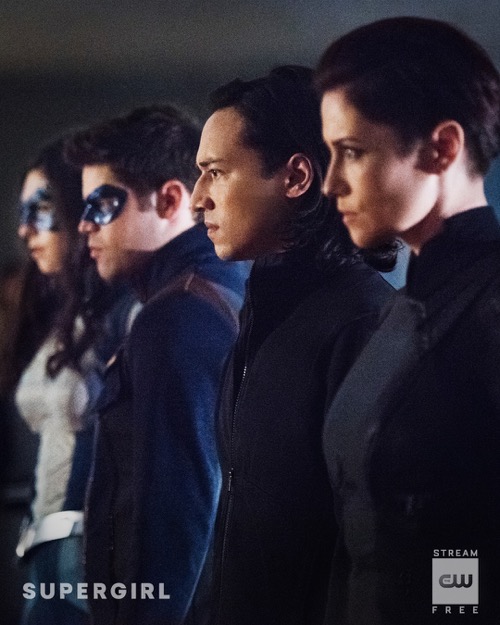 Tonight on the CW the series Supergirl airs with an all-new Sunday, January 26, 2020, season 5 episode 10 and we have your Supergirl recap below. In tonight’s episode called, “Back From The Future”  season 5 episode 11 as per the CW synopsis, “As Supergirl tries to thwart a Toyman copycat, Winn Schott returns from the future.”

A bus carrying a bunch of prisoners crashes. Lex offers one prisoner away to safety if he wants to live. Meanwhile, Kara and the girls are sharing drinks and gossiping over Brainy and Jimmy.

Lex sits and talks with the Toyman. They talk about his dad. Lex thinks it would be fun to get revenge on those who laughed at his dad. Lex heads to see Lena. Brainy is with him. Lex wants Lena to talk to Andrea to see what she knows about leviathan. Lena wants to know what Brainy is doing with Lex. Brainy explains that this Lex is on the right side of the law.

At a toy convention the next day. Kara shows with a news reporter. They tell Lex they plan to run a piece on him. Lex pulls Kara aside to tell her its a bad idea. He shouldn’t be punished for the bad Lex. Suddenly, there is trouble. Its the Toyman, kara changes into Supergirl and helps fight alongside Alex. The Toyman gets away. Winn, who came back to this time to catch Toyman, is upset. Alex, Supergirl, and Brainy console him. He shares that he has a family now.

Lena meets with Andrea to talk to her about the leviathan. She knows nothing. Lena reports back to Lex. Meanwhile, Kara, Alex, and Winn have arrived to see J’onn in a new location, coined The Tower. J’onn gets Winn up to speed on evil Lex owing the DEO, how Lena killed him…and so on. Winn starts to hyperventilate.

From The Tower, they watch as Toyman broadcasts his evil plan to retaliate. He rallies his troops and puts a hit on Winn’s head.

Back at the paper, Andrea demands Kara and the new reporter William to get her an exclusive on all the action.

Kara brings Nia to meet Winn at The Tower. Winn wants to talk all about Nia’s ancestors but Kara redirects them. Stories later, bad guys now. Nia works her magic to see what is going on. She sees a tiger and then gets upset. She heads outside. Winn follows. She is sorry she couldn’t help. She shares that she really saw her ex-boyfriend turn into a tiger and then attack her. Winn can’t tell her exactly what happens for her in the future but she is very powerful and should never question her worth. Kara watches on, telling Winn after that he must be a great dad. He shares a few stories before Kara shares her dilemma. Lex has threatened to hurt William if he does share his story in an expose. The others come to tell them that after connecting some dots from Toyman’s world, Andrea is in trouble.

The gang heads to a conference where Andrea is giving a speech. Supergirl takes down a toy tiger while Winn finds the Toyman in the back and tries to stop him. Winn tells him he can change but the Toyman isn’t listening. He drops a device that throws a wave of flames. The team runs for it, helping those left behind to safety.

Kara heads to the paper and tells William that she wants to partner with him on the Lex piece. It’s her way of protecting him and he doesn’t know it, He agrees. They share a moment. Kara quickly jumps back and giggles nervously before telling him he should come to game night. Meanwhile, Winn asks Brainy to play trivial pursuit. He needs his partner. Brainy is too busy. Winn wants to know what is up with him.

Brainy is horrified to admit it but he is truthful, sharing he has been helping Lex, who brought Winn back. Winn is angry. His family and everything he could have lost. Brainy continues on, the shame, the lying, lying to Nia. Brainy cries. Winn makes it all sound a little less terrible. He is okay after all and they are always friends.

Lex shows Lena Q-Waves. She is mesmerized. They do exist. He thanks her for dealing with Andrea. The gang gets together for some games and laughs.