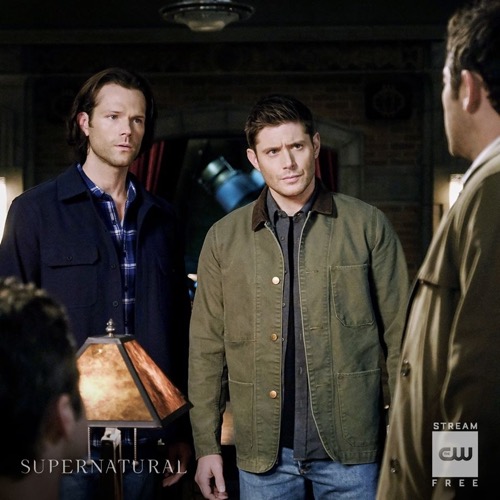 Supernatural airs tonight on the CW with an all-new Monday, March 23, 2019, season 15 episode 13 called “Destiny’s Child,” and we have your Supernatural recap below. On tonight’s Supernatural season 15 episode 13 as per the CW synopsis, “A search for the one thing that may give the Winchesters an edge against God leads Sam and Dean to Jo’s door and to a secret that may have died with Ruby. Meanwhile, Castiel asks Jack to do the unthinkable to help the brothers in their quest.”

Sam and Dean hear a noise and run to the other room. They open the door to find two of their doppelgängers getting out of a Volkswagen. Then they suddenly disappear.

They run to cast to tell him what they just saw. They saw themselves but it looks from maybe another world. Billy shows up to explain that it was them from another world but they disappeared because God is killing off all of the other realities. Billy has a job for Jack. He comes into the room eating a sandwich, interested in what she has to say. Billy shares that she wants him to find the Occultum. Jack says that he’s ready. They can’t let God know.

Sam and Dean head to see Joe. They need her to be on their side to fight God. She isn’t really interested. They want the Occultum. She shares that she gave it to a friend named Ruby. Sam and Dean head back to the bunker until Cas they’re headed to hell.

Sam and Dean arrive in hell asking for a Rowena. Apparently she’s hosting a reception for condemned souls. Meanwhile, Cas tells Jack that he doubts Jo’s story, there are too many holes. He has a plan. He wants Jack to kill him, almost. He just needs one hour and then he needs Jack to bring him back.

On their way to see Rowena, Sam and Dean realize it was a trap when they are cornered. They fight their way out and find out it was all Jo’s doing.

While looking into Jo’s story, Cas arrives in the empty to find Meg, who hasn’t changed. She calls for Ruby. Cas comes face to face with Ruby, who tells him how Jo called on her about the Occultum, not the other way around.

Jo wants to team up with Ruby, who agreed and then they stashed the Occultum together and not in hell. Ruby will share that location if Cas gets her out. Sam and Dean arrive to find Cas half dead while Jack watches over him. Dean demands he bring Cas back just as Ruby whispers to him about where the Occultum is. As Cas looks to be making his exit, Meg messes with him, looking to kill him. Cas manages to make it back thanks to Jack.

Sam and Dean realize their doppelgängers from another reality are stuck. They want to blast them here. They manage to pull it off, sitting across from them. They are eccentric, pampered versions of themselves. Their dad is still alive and he spoils them. They also don’t drink that much beer. The whole thing is strange to Sam and Dean. They ask their doppelgängers to help them out, pretend to be them so God won’t be any wiser while they pull off a mission.

Sam, Dean, Cas and Jack head to where Ruby shares the Occultum is. They arrive at a church where they narrowly escape hellhounds. Sam holds the church doors while Dean digs into a floorboard to find a key. Cas says something about the need to have it in him to make it work. Jack swallows it quickly. Dean tells him to spit it out. Jack wakes in a garden to see a young girl. He realizes he is in the Garden of Eden. The girl tells him that it is true, the garden might change him. He will know soon enough. He sees a snake. He has flashbacks of his mom, the guys, hanging out eating burgers. He passes out. Meanwhile, in the church. A glowing globe floats in through the roof. It explodes leaving Jack on the floor.

Sam and Dean say goodbye to them alter egos who suggest maybe they could stay and all live together. Dean tells them they would love Brazil, sending them on their way. Before they leave they tell Dean they saw the car and they drove it. This makes him angry as they run!

Cas learns that Jack visited a crossroads and no one has been there in a long time. They head to see him. He is crying. It is all his fault. Cas tells them he is like this because his soul is back as Jack begs for forgiveness.