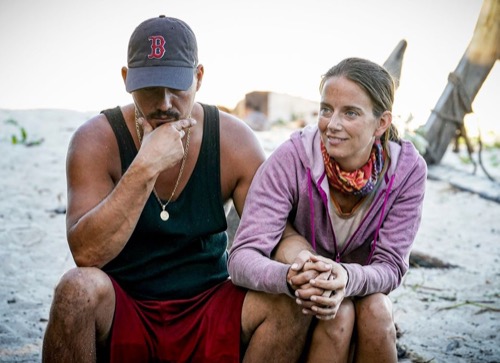 Tonight on CBS Survivor airs with an all-new Wednesday, March 25, 2019, Season 40 Episode 7 and we have your Survivor recap below. On tonight’s Survivor season, 40 episodes 7 called “We’re In The Majors’ as per the CBS synopsis, “Some winners sprint their way to an opportunity to gain an edge over the other castaways. Also, one tribe employs a different strategy in a rigorous immunity challenge.”

Yul and Wendell are talking, Yul doesn’t trust him and is going to keep his eye on him. Wendell apologizes to Michelle about Tribal Council, she tries to give him advice, but he says he is there to play. Wendell just wants to play his game, he doesn’t want to be on a leash. Yul then speaks to Michelle in private and tells her that Wendell has a different tone, defensive and confrontational when he speaks to Michelle, she is a little surprised because she actually gave him a fire token to try and repair their relationship. Michelle doesn’t want to move forward in this game with Wendell.

At the Island of Extinction, the survivors don’t look that happy. Ethan says every day is a battle with the elements and with nature, and he has his own personal struggle with why is he there. Ethan feels defeated and has a hard time holding on to hope. Parvati speaks to Ethan, tells him that he has been through worse. She tells him that fasting is actually good for the body. Ethan finds she is a big help because she always tries to be positive. Ethan wants a chance to get back in the game and win the two million dollars, he wants to give it 100% and see it through to the end.

Ethan finds a box that they must open together, there is one scroll each in the box. And this is what the scrolls day, “scattered on top of the island there are four fire tokens, follow the trails to their natural ends, then the search begins, there is no limit on how many fire tokens any one player can find.” Alright, once again it’s game on. They leave the rice on the fire, and everyone starts to print. Boston Rob takes off the fastest and feels that if he gets there first, he has a better chance. Tyson finds the first one and shows it to Rob and Natalie. Meanwhile, Rob was sneaky, he actually found three and didn’t tell anyone.

Sophie is happy that there are peanut butter leftovers, she hopes it will cheer up her tribe because there is tension bubbling on the surface. Ben asks Adam if he has the idol, he says, but Ben doesn’t believe him. Ben thinks Sarah has the idol, but Sophie has it. Ben thinks there is a chance he is wrong, but he feels pretty confident about this.

Time for the Immunity Challenge, for today’s challenge they are going to carry a large saucer to a water tower, fill the saucer with water and race through a series of obstacles. Whatever water is left, pour it into a well, run back and do it again. Once they fill the well, puzzle pieces will drop, they will then use them to assemble a puzzle.

Yara has an early lead, but Dakal and Sele are right behind them. Yara wins immunity and is safe from Tribal Council. Dakal comes in second, Sele is third. Second place was honestly the difference of probably a second. Nick says it is salt in the wounds that they lost.

At Sele, Nick is frustrated with Wendell, if he had just paid attention instead of showboating they would have won the challenge. Nick tells Yul how he feels, they both agree Wendell is going but they are going to tell Wendell that they are writing down Michelle’s name. Michelle tells Yul that she is upset that she gave Wendell one of her fire tokens. Yul has an idea for how they might be able to get Wendell’s fire tokens. Yul says there is another part to this that they could do if they wanted to, try and get Wendell’s fire tokens.

Yul wants Wendell to believe that there is no way Michelle would have written down his name, so he bequeaths his token to her when they backstab him and vote him out. Who knows where the vote is going to go, Yul got under Nick’s skin when he started trashing Wendell and know Nick is talking to Michelle about maybe getting out Yul instead. Michelle says she will do whatever Nick wants her to. On the other hand, Michelle would like to get rid of Wendell for revenge. But, Yul is a strong player and it would be good to get rid of him.

At Tribal Council Wendell says it sucks to be there, but it doesn’t change who the group wants to vote out. Jeff asks Yul how he feels that he is the only old Survivor player there. He says it is a different game than Cook Islands, the fire tokens are messing with everyone’s mind. Wendell says it is about trust, you have to find people you trust. Wendell says he wants to win this game and he is here for him.

Michelle says Wendell makes it really hard to want to work with him. Wendell apologizes, he tells Michelle he cares about her and her future. Nick says the day was different, and if it is him to go, no burned britches. Wendell says it will sting if he goes the Edge, and he will have a hard time working with these three if he wins his way back. Time to vote.

The first vote is for Yul, then Wendell, Yul, and Yul. Yul is shocked to be voted out and Wendell looks like he is thankful that he is saved for another week.

Yul bequeaths his fire tokens, one to Sarah and one to Sophie.