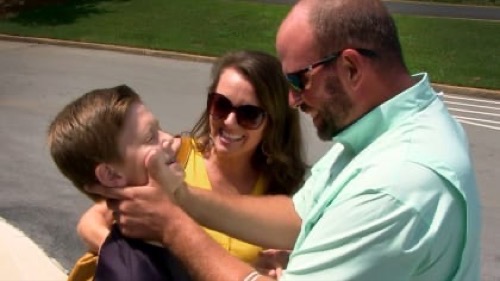 School is starting for the boys, and fears of COVID-19 lead Courtney and Eric to consider homeschooling. They also decide to send the sextuplets to a speech pathologist.”

So make sure to bookmark this spot and come back from 10 PM – 11 PM ET! for our Sweet Home Sextuplets recap. While you wait for the recap make sure to check out all our television recaps, spoilers, news & more, right here!

It’s been seven weeks since the coronavirus put a halt to everything. For the last two months, the family hasn’t been filming. They’ve been taking some downtime to reconsider everything and now they’re back. They’re back and they’re moving back into their house. The family had started construction on their home before everything hit and so that drew out the process, making it longer than originally planned. The family was just so happy that some things were done that they were moving back in before everything was finished. Their children’s rooms are finished. There were bunk beds for everyone. There was the younger boys’ room, the older boys’ room, and the girls’ room. The only room that wasn’t finished was the parents’ room.

Courtney said they would just have to make do. She was happy to be back in her home with her family and the kids’ new bathroom was great when she was washing up the sextuplets. Blu was perhaps the most difficult child during this time. Blu is like having six kids all by himself and he used his bath time to drench his mother’s makeup bag. Courtney also had to take her oldest son Saylor to the dentist. He was getting braces and she had a hard time believing he was old enough to have all his adult teeth. Courtney needed braces as well. She was told by the dentist that she needed them and she’s been pushing it off because she’s had so much else on her plate.

Courtney needed braces because she has jaw pain. She has a condition that wearing her teeth down and braces will help fix it. Courtney used the chance Saylor was seeing the dentist to have a consultation as well. The dentist told her it’s better to get the braces now. Else she’ll be reminded of it each time she brings Saylor for his visit and that wasn’t the only she had to worry about. Courtney and her husband Eric have noticed that in terms of their younger children it was their daughters who were more advanced than their sons in their speech. Courtney would like for a speech pathologist to come in to make sure the boys where they needed to be.

Courtney knows that school and daycare would have helped. Those things have been canceled since the outbreak of the coronavirus and so she and Eric also discussed how they would feel when school reopens. Courtney tried to school her children during the break. It was hard with six two-year-olds and she knew she did slack when it came to certain areas. Courtney and her family later said goodbye to the mobile home. The mobile home was their home for seven months and so it was so bittersweet for the kids. They were sad to see their home go away. Courtney had to tell them it was going to be a new family’s home.

Living in a mobile home had been tough at first. Then they found things to do like Family Game Night and they all secretly cheated at it. The older kids were all playing with their parents one day when their parents asked them if they would be okay with homeschooling. The parents hadn’t made a plan or anything. They were just feeling out what the kids want and the kids said they were fine with homeschooling. They weren’t in a rush to return to school. They know about Covid-19 and they were just as worried as their parents. No one knew what to do in this very unique situation. Courtney even tried asking her friends about their plans and her friends don’t know what they’ll do.

Her friends did think it was a great idea to hire a speech pathologist. One of Courtney’s closest friends grew up with a speech impediment and she said how horrible was growing up that only her mother understood her. Everyone else didn’t. They made fun of her and so she would hide behind her mother’s leg not wanting to speak in front of anyone. This friend was therefore a big supporter of a speech pathologist. If the children can receive help now before it gets worse, that would be amazing and so Courtney made an appointment. She brought in her sextuplets two by two into the speech pathologist office. And Sandy got to study the children’s language skills.

Sandy said all six children won’t be on the same level. She found some to be 21 to 24 months and others to be 18 months. The children do need help with their speech. Hopefully, Sandy can come up with a program for them to help them because four of the sextuplets did need additional help. They weren’t where they needed to be for their age groups. Maybe after they see Sandy for a while they’ll get to know where they need to be. Courtney and Eric were also going to help. They spotted some mugs at a shop and the mugs detailed what they were for on them. They said Milk, Sugar, and everything else. And so Courtney’s friends told her she should get them because that will help teach the kids how to read.

And after a tiring day at the Speech Pathologist office and later the dentist office because both Courtney and her son Saylor got braces, Courtney and Eric came up with a fun treat. They brought out miniature animals. There were pony rides. There was a unicorn. There was also goats and ducks. The children loved all the animals. And the parents came to the decision that they would be sending their kids back to school. They believe its best for their kids.