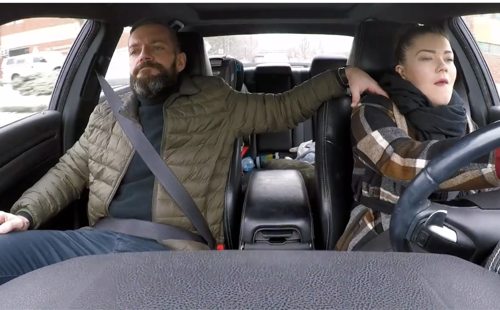 Tonight on MTV Teen Mom OG returns with an all-new Tuesday, May 12, 2020, episode and we have your Teen Mom recap below. On tonight’s Teen Mom Season 8 episode 21 as per the MTV synopsis, “Jenelle and David are back for a showdown against Barb and Nathan; Kail, Chelsea, and Leah work together to get Briana and Jenelle removed from the show.”

Amber already has a reason to distrust Dimitri. She found out that the European papers were reporting about their relationship and she thinks he tipped them off. He was the only one that could have told the papers that they were dating. He was also taking calls from his supposed cousin and he wasn’t showing Amber his phone. Amber was really curious about who he was talking to. She had wanted to see his phone and the fact he was withholding it was making her suspicious. Amber feels like she needs to test him now. She decided on doing another lie detector test. She did one once before with her ex-boyfriend Matt and it showed Matt was coming onto other women.

So, this new test would show if Dmitri could be trusted or not. Amber hasn’t brought it up to him yet because she wanted to run it by Gary and Gary was supportive as always. He knows why Amber has such doubts. He’s seen how her relationships start out well and end in disaster because the guy has done something untrustworthy. Gary doesn’t want Amber to get hurt like that again. Amber doesn’t want to get hurt like that again and so she was going to test her new boyfriend. Hopefully, he’ll agree to it. Amber really needed to get this test done to feel secure again and so Dmitri should go through the test if he wants his girlfriend to trust him again.

Bentley’s new sister came. His sister’s name is Stella and he thinks she likes their dad. Bentley is an old hand at being a big brother. He has three brothers and now two sisters. He was also with his grandparents when his stepmom went into labor and so he got to be one of the first people at the hospital. He met his sister. He took photos with her and he also hung out with his brother Jagger. Jagger didn’t really understand what was going on. He was still a baby and he was more interested in playing roughhouse with Bentley than he was in meeting his new sister. Bentley played with him. He also talked to his grandparents.

They were happy about having a girl in the mix. It was a first for them as grandparents and they were glad Bentley got to share in the family celebration. Bentley would normally be with his mom and stepdad, but they allow him to see his paternal grandparents and usually, grandma and grandpa spoil him. They like to give in to Bentley’s every wish. They think it’s their duty as their grandparents because they don’t see him all the time and so they didn’t take into account how his parents would feel about it. Both Maci and her ex Ryan have had a problem with the way their son is being spoiled and they wish they could stop it. They just don’t know-how.

Young Ryder was dealing with her father’s absence quite admirable. The toddler wasn’t crying for him or anything like that. She was making do on the few times he could call her from his reality show and she was doing well until her health took a turn. Ryder couldn’t keep down any food. She developed a fever as well and so her mother rushed her to the hospital. Ryder has a prior condition. She was born with it and this meant the adults couldn’t take a risk with her health. They had to lower her temperature. They also had to prevent her from getting dehydrated which was their chief concern and so Ryder spent the night in the hospital.

Ryder didn’t understand what was going on because again she was just a toddler. She was actually a lot calmer about the situation than her mother was. Cheyenne was dealing with this all on her own with Corey away and she hadn’t wanted to worry him by calling him. She was also told by the hospital that Ryder couldn’t have guests. So, it was just Cheyenne and Ryder at the hospital. Their family kept in touch with via facetime and that helped. Ryder was later discharged from the hospital. She was home for a day before she had to be rushed back to the hospital and so again Cheyenne kept this from Corey because she didn’t want to worry him over nothing. She thought he doctors had this and so she hadn’t told the father of her daughter that Ryder was in the hospital again.

Mackenzie took a trip with her daughter and husband. It was a business trip and they turned into a special birthday trip for her daughter. This was the first birthday after Mackenzie’s mother passed away. It was also the first trip since then and so it was important to Mackenzie. She had wanted to make her daughter feel better. She was able to do so with this trip. Her daughter Jaxie got to see some dolphins and go to the beach. She even told her parents how she liked both of them. Which is something they haven’t heard in a while and so it was nice to hear now? Mackenzie went into this trip wanting it to be special for her daughter and it, in turn, helped her feel better.

Mackenzie was able to laugh again. She enjoyed herself and she liked being with her family. Things have been rough between her and Josh lately. Josh had cheated on her while her mother was dying, and he later apologized for it. He said the kiss he shared with the stranger had meant nothing. He wanted to be with his family and he did everything possible to win Mackenzie back. He’s also been trying to help her since her mom died. They’ve been talking more and while there have been some setbacks in their conversations there has also been a lot of good. And this trip with Jaxie is bringing them closer together.

Catelynn and Tyler have been working on his clothing line. He created a clothing line for kids some years ago and they had put it on the backburner when they separated, but now that they’re back together and stronger than ever, Tyler wanted to continue his dream. He wanted to create an affordable clothing line and he wanted to do it the states. He knows it would cheaper if he outsourced. He might even be forced to do so because the manufacturer had nearly tripled the price on how much his clothes would cost and this was going to force Tyler into raising prices on his clothing line altogether.

Tyler didn’t want to that. It wasn’t a part of his dream and at the same time, he didn’t want to outsource it to China. Tyler didn’t want any child labor to go into his clothing line. He wanted the people who created the clothes to make a livable wage off of it and he especially wanted them to be adults. He didn’t want anyone to be harmed in the making of his clothes. Tyler later tried talking to the manufacturer again because he wanted to better understand the business side of things and it was then fully explained to him why the prices went up. Tyler was told there was nothing they could do on their end and so now he has to make tough decisions about his children’s clothing line.

Dmitri took the lie detector test and he passed it. He proved he could be trusted and so now Amber just has to trust him.