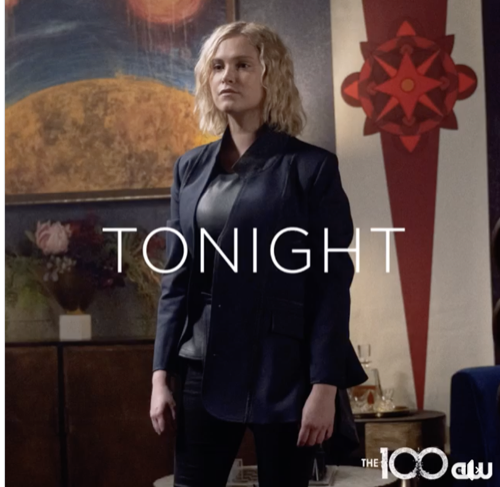 Tonight the CW series The 100  airs with a Wednesday, May 20, 2020 season 7 episode 1 premiere and we have your The 100 recap below. On tonight’s episode called, “From The Ashes,” as per the CW synopsis, “Clarke and her friends attempt to rebuild Sanctum as a new threat rises in the woods.”

Out in the woods, Bellamy yells for Octavia. An unseen force throws him across the forest floor. Inside a makeshift tent, Hope freaks out, running from Echo and Gabriel. The two let Hope run and chase after Bellamy.

Clarke and Madi play with her dog. She finally gets to be a kid in their new home. They head to the kitchen to eat. After Madi leaves, they talk about who will represent the commander. Raven makes a joke about mothers and daughters and then feels guilty she said such a thing in front of Clarke.

Murphy, Clarke, Raven, and the others eat outside on the grass, talking. They celebrate their first meal in their new home. They toast to Abby. Meanwhile, Hope is bloody and tired in the woods. She pulls something from her wrist. It is a metal tube implanted in her skin. Inside is a scroll that says “trust Bellamy.”

Clarke and the crew head to see the others living nearby. There are so many different groups, many are arguing. Clarke finds Jordan and offers him a room at the house. He is staying above the tavern.

Jordan visits Russell. He is being held in shackles. Russell just wants to be put out of his misery. Jordan tells him he had a vision. Russell talks about creating the sanctum but. After that, he is done talking. Meanwhile, the others are still searching for Bellamy in the woods. Gabriel and Echo find Hope instead who shows them the scroll from her arm. Gabriel thinks she lost her memory like Octavia did. Echo doesn’t believe that. They follow Hope anyways to find Bellamy.

At the tavern, Murphy is still feeling guilty over Abby’s death. Jordan arrives. Trey wants to know about Russell. Jordan shares he is ok. This isn’t good enough for Trey. He starts a riot outside of the tavern. The others want to see Russell killed. Indra wants to move him to the palace. Clarke goes with her. Russell asks Clarke why she is protecting him. He killed her mother. She doesn’t answer.

Indra walks Russell to the palace amid the angry chants. Emori gets the crowd to calm by telling Trey “We Are One.” He starts the chant, moving the crowd.

Clarke and Indra arrive home late. Clarke shares how long the day was. Madi wants her to be ok with losing her mom. Clarke tells her she is fine. Madi shares how she lost her mom. When Clarke stays somber and isn’t willing to talk, Madi gets upset and leaves to go to bed. Clarke sits. They hear gunshots outside.

It is night, Hope and the others run through the woods trying to hide behind trees as ray guns are shot at them. Echo has a theory. She doesn’t think they are trying to shoot them. They sit and wait. Echo gets ready to fire. She struggles as she sees Roan, Octavia, and others. Gabriel tells her to take the shot. She does. They run to the man. He has marks like her. Gabriel notices the anomaly is quieter.

Clarke and Indra head to see what is going on. The Children of Gabriel want Russell. Clarke tells them no. They give her until noon tomorrow. Indra believes Russell should die. Clarke thinks there should be no more violence. She heads to get Jordan who tells Trey she can be trusted to see Russell. They let her in.

Clarke asks Russell to order his people to leave the palace. He gives her some of her mother’s things. It. Strikes a chord with her. She begins beating him. She pulls her gun. He begs her to pull the trigger. Instead, she kicks him. She grabs her mother’s things, crying. Miller screams for her to open the door as Russell has a flashback of sorts.

Clarke brings him out by gunpoint. She talks to the crowd from the palace. She tells them Russell will die tomorrow. There are no kings and queens, just humans. They chant with excitement.