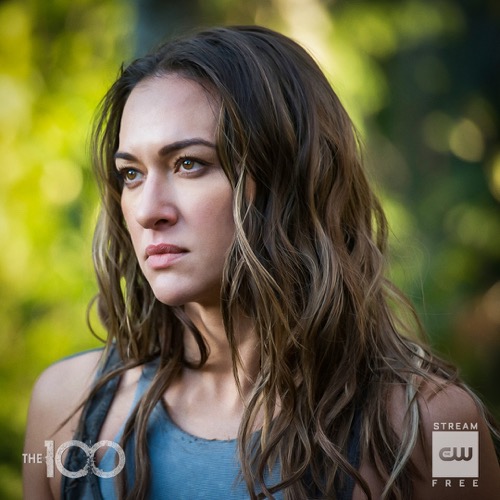 Tonight the CW series The 100  airs with a Wednesday, June 10, 2020 season 7 episode 4 and we have your The 100 recap below. On tonight’s episode called, “Hesperides,” as per the CW synopsis, “Mysterious outsiders arrive with news of Clarke’s missing people.”

Left all alone after her mom and Octavia are taken, Hope spends her time alone waiting for them, eating out of the garden and fishing. Someone finally arrives but she scares them off. The man keeps returning, giving her a gift. He eats out of her garden and becomes sick after picking the wrong berries. She makes an antidote and feeds it to him while he lays on the cabin floor. They begin to spend their days together while he teaches her how to throw a knife.

Years past, Dev and Hope make a plan for her to get to Bardo. When the men finally cross the bridge and arrive for Dev he is killed, allowing Hope to escape.

Present-day – Hope tells Gabriel and Echo to leave the man in the cabin alone. They will need him.

Clarke comforts Raven, telling her that she’s not responsible for killing the people it was the nuclear reactor.

Clarke and the others had to find their friends who have been taken by the disciples. They want Clarke to go with them if she wants her friends back.

Clarke heads back to tell Raven and Jordan that she needs to leave to save their friends. Meanwhile, Hope and the others work the garden at the cabin.

The man arrives to see Hope. He is speaking and has brought pumpkin seeds. When Gabriel returns with water he runs off. The three decide the only way to get the man is to bait him. They send help out into the middle of the lake. She pretends she’s drowning so he goes out to save her. After, they discover his absolution day isn’t for another four years when they might be able to get off the planet.

They all sit for dinner and talk about Hope’s mom, who she learns was a freedom fighter

Hope shares how she met Dev and how their mission failed. Orlando tells them about. Bardo. He talks about how he was locked up. The subject upsets him. He decides he wants to leave.

Raven and Jorden look over the suit of their enemy. She tries on the helmet and sees the universe. She discovers there is an anomaly where they are. She learns from the helmet that the anomaly is connected by wormholes.

Out. In the woods, Hope and the others train. Orlando shows up. Echo starts a fight with Orlando, making him fight her. He puts her down on the ground after she tells him she isn’t scared, betting him he can stay in the cabin if he can fight her. That night they sleep under the stars.

Gabriel talks to Orlando about their plan to fight the disciples. After hearing him out, he decides to help them fight by training them. They have 17 days.

The night has come before the battle. Orlando shares how great he thinks they are as trainees. They ask him to come with them but he declines, opting for honor and duty. The men arrive. Hope and the others take them out, stealing their suits. Echo then kills them, going against the plan. Gabriel tells her it is wrong. She doesn’t care. She doesn’t want them coming after them. They leave Orlando and cross the bridge.

Clarke arrives to see the disciples. She wants her friends. They tell her that her friends killed more of their men. Time moves fast there. The leader tells Clarke that she is going to answer his questions or she will die. Jordan comes out of nowhere as a distraction while Raven appears in a suit and takes them all out.

Raven puts the helmet on and goes through what she can see with Clarke and the others. She can see different planets. They all opt to go except Gaia who stays for Madi. After all, leaving together, Gaia is attacked and brought. Across the bridge.

Clarke and the gang arrive in snowy landscaping and want to go to another planet. Raven tells them they need an anomaly stone.