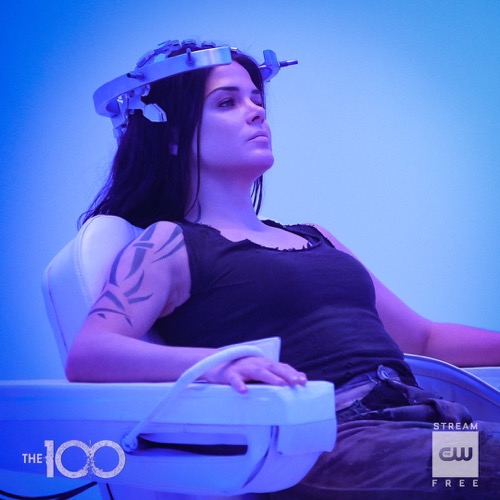 Tonight the CW series The 100  airs with a Wednesday, June 17, 2020 season 7 episode 5 and we have your The 100 recap below. On tonight’s episode called, “Welcome To Bardo,” as per the CW synopsis, “Octavia gets to know a whole new world. Meanwhile, Murphy and Emori play make-believe.”

After being brought aboard the enemy’s ship, Octavia manages to fight several men off and escape down a hall. She looks for a way to get out. She leaves a door to the outside, seeing a forest. She runs but hits an invisible wall. Men surround her. One welcomes her to Bardo.

Indra deals with several groups who all want Russell dead. Indra is trying to find Clarke. Trey demands Russell to be released. Trey tells her if Russell isn’t released, members will sacrifice themselves every hour. She doesn’t give in. A woman sets herself on fire.

Indra and the others visit Russell. He tells them he didn’t put the Primes up to this. Meanwhile, Murphy is cleared for duty after being exposed to radiation.

Octavia is in a room with a man in all white asking her who she is. Another man watches on. Using a device, they use a hologram to read her thoughts and search for her memory.

Murphy visits Trey to try and get him and his people to stop killing themselves as Indra watches nearby with a gun. Murphy heads inside and insults them for letting children be apart of this. He takes the children with them but doesn’t get far when someone locks him in. Trey attacks Murphy from behind.

The men in white continue to ask Octavia questions. The leader is away. The man begs her to give him something so they both stay alive. The man sees Hope in Octavia’s thoughts. Octavia begs to be freed so she can go back to Hope. She agrees to cooperate. The man tells her it is a deal.

The man determines Octavia is a warrior with a pure heart. Just. When he begins to release her, Hope comes out of nowhere. Together they take the man to find Charmaine.

The man tells them he can help them cross the bridge but they won’t remove one another when they arrive. Octavia punches him before they leave to make it look like he was overpowered. Before they depart, Hope tells Octavia how proud she is. Hope doesn’t go though. She turns around to go and find her mother.

Gabriel, Echo and Hope meet up and take out several men. They have 30 minutes to find her mom and the others. They make their way around, blending in with the others. They find their way into a large meeting where the leader speaks about locating the key.

Fast forward, Hope is in custody with the leader there. He tells Hope that Clarke is the key. He sends his men for Clarke, keeping Hope captive. Octavia arrives. After being brought back.

Russell is brought in to see his people. They tell him Murphy is not a prime. He reprimands them and demands Murphy be released. They free him. They. All beg for his forgiveness. He tells them to kneel before leaving. Something about what Russell says sparks something in Indra. She brings him back to the lab and demands to speak to him. She knows who he is and if the people find out they will riot. Indra brings in Nelson and the others.

She is going to make sure when he dies he cannot come back. They cut something out of his neck. Meanwhile, Octavia wakes to the man who helped her. He warns her to be careful and how to beat the machine. The leader come sin. Her brother is here.

Later, Hope and the others find Octavia with a new soldier trying to get information. They bring her to see her brother who has one of their own. Octavia tells them to let him go and she will give in. He begs her not to. Just then a bomb explodes. Octavia screams for Bellamy.