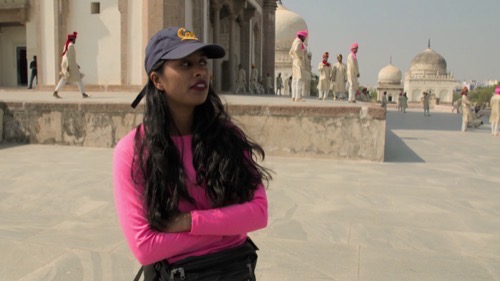 Tonight the CBS series The Amazing Race airs with an all-new Wednesday, November 25, 2020, season 32 episode 9 and we have your The Amazing Race recap below. In tonight’s season, 32 episode 9 called, “This Is Not Payback, This Is Karma” as per the CBS synopsis, “In the first-ever “Mega Leg” in the show’s history, teams race through Hyderabad, India.”

Qutb Shahi Tombs, India, Kaylunn & Haley are sitting down and doing their yield, but they are not worried, it is a mega leg and they can still catch up. Eswar is finished with the turbans, the girls are left on their own.

Riley & Madison arrive at the Detour, it is called, This or That.” In “This” teams must find bangle bracelets that a bride is wearing to get their next clue. But, they have to push a cart full of bangles and find the matching ones in the cart. The bride is wearing a total of seven bangles. Meanwhile, Kaylynn is finished two of the turbans, she is moving quite quickly and if they don’t get lost again, they might catch up. Hung & Chee choose “That” where they have to take a mold of a patient’s teeth for dentures, then polish a set of finished dentures and fitting them into the patient’s mouth.

Riley & Maddison get their next clue, they must travel by horse and carriage in style. In Getting The Royal Treatment, teams must dress in traditional attire and travel with socialites by horse and buggy. They arrive at their next clue and decide to yield Kaylynn and Haley because Hug & Chee are struggling, they want to give them some time. It’s a Roadblock, “Who Wants To Set Things Straight.”

In a dining room, a hundred and eight tables, teams have to prepare the table for a royal dinner by choosing a place setting inspired by the artwork in the palace and precisely set it up ten times to receive their next clue. There is a man there that shows them how to arrange the napkin in a certain way and it is not easy.

DeAngelo & Gary are in second place and finished with the bracelets, so are Will & James. Meanwhile, Riley is setting the table and since they are ahead he is really trying to make up time so they can maintain their first place.

Hung & Chee have finally finished with the dentures, while DeAngelo and Gary have arrived at the palace. Will & James are in third place, they caught up and are just arriving at the palace as well. Each team gets a different napkin style and they must measure the place settings, they must be within a yard. They are coming down to the end of the race and the five alliance is officially dead. Riley has done all his measurements and called for a check, his setups are all wrong. All the teams are doing the place settings, the girls have not arrived yet and don’t know that they are yielded a second time on this leg.

Riley & Madison are done, they are team number one and run outside to the Pit Stop and Phil. They have won a seven-day cruise to the Caribbean. They tell Phil that the five alliance is done, they are now in a three alliance. Will & James are done on the first try, they are in second place. Phil asks them about the alliance, they say the five is over even though everyone doesn’t know it is.