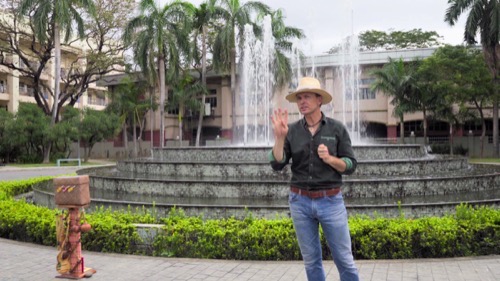 Tonight the CBS series The Amazing Race airs with an all-new Wednesday, December 9, 2020, season 32 episode 10 and we have your The Amazing Race recap below. In tonight’s season, 32 episode 11 called, “Run On Your Tippy Toes” as per the CBS synopsis, “The first-ever city sprint. The final four teams will have no road blocks, no detours and complete every challenge as a team as fast as they can when they race through Manila, the capital of the Philippines.”

Siem Reap, Cambodia, after finishing first Riley & Madison won a free trip in the last leg, and now are the first team to depart to Manila in the Philippines. Once they land, teams must head to Lapu Lapu Circle to meet with Phil. At this point, nobody is helping anyone because it could mean winning or losing the entire game.

Phil welcomes the final four teams to Manila, he tells them that for the first time ever, they are going to partake in a city sprint. They are going to be racing around Manila in all the crazy dense traffic as fast as they can. There are no Road Blocks and no Detours, they will do every challenge as a team, and speed matters the most. They are going to race all around the city and they have to return to the starting point. This is the start for this leg of the race and it is the Pit Stop. Phil tells them to drop their alliances and work on making it back as fast as they can.

Their first clue is in a marked vehicle close by. Waze once called the traffic in Manilla the worst on earth, the perfect recipe for road rage. Teams must find Romero, a traffic guard who entertains people in traffic and puts a smile on their faces. He will give them their next clue. Riley & Maddison are in first place, they get their next clue from Romer, DeAngelo & Gary are in second. Hung & Chee miss it and have to circle back around. The traffic is a nightmare and it is like a crap shoot at this point.

Will & James are frustrated, they had to circle around as well, but they get it before Hung & Chee. Next stop is the Hall of Asia where teams will have to run a marked course in stilettos.

This is not easy, DeAngelo & Gary are having a hard time. After the stilettos, the next clue tells the teams to head to Binondo Arch of Goodwill where it is customary for businesses to welcome dancing lions with the hope of bringing them good luck and prosperity. Teams must search the lions on the busy streets to find the one with the next clue. Will & James, Hung & Chee are pretty much at the same pace, both have just finished with the stilettos. Gary & DeAngelo are searching the dancing lions, and they have found the one with the clue.

Meanwhile, Hung & Chee are confused. Gary & DeAngelo head to Manila’s Central Post Office where teams must find the caleches, horse drawn carriages. After choosing a horse, teams must feed it and search the grounds for the necessary ingredients and mix them up. Once they serve them up, they will get a clue.

Hung & Chee have finally found the lion with the clue and head to the Central Post Office. Will & James are done, they have fed their horse and head to Mehan Garden Manila to receive their next clue. There is a band playing, they must listen to them sing a medly of songs that they heard on the race.

Teams must identify four pieces of music. They must find four instruments cases identified with the national flags of the country their heard the music in and they must put them in order of how they are played on the race. This task is tough, Hung & Chee are in last place so hopefully they do well with this one or they are going to arrive last and be eliminated from the race.

Gary & DeAngelo ask Will & James to work together, but they so no; good move. The teams decide to go back to their alliance, they omit Gary and DeAngelo but decide they will do better together and that way they are guaranteed to be in the final three.