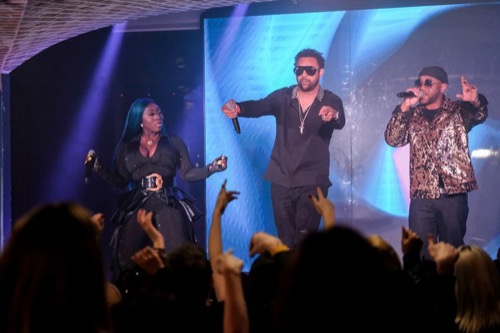 Chris and Bri serenade a happy couple at their wedding. Jamie and Trevor use an empty arena as a backdrop to share their feelings for one another. Rudi and Matt are invited onstage by Reggae and dancehall icon Shaggy to sing backup on one of his hits. ”

Matt loves that it is down to four couples and knows the competition is now tough. Chris walks in. Jamie just trying to focus on her relationship with Trevor, she didn’t like the drama that Natascha brought in the house. Chris asks Chris and Bri how they feel. She says that when she hugged Chris, it just came out, he says the same thing. Rudi loves to hear Bri and Chris talk about each other and hopes she can get there with Matt.

Chris tells them they have another musical performance but there will be a massive emotional change. They can’t move forward in Los Angeles, they need to pack their backs, they are leaving LA for good and going to Vegas and traveling by tour bus.

They enter the tour busses and are floored with how luxurious they are. Each couple has their own bus. Rudi tells Matt hat when she met him that she wanted to jump his bones. She is so looking forward to getting to know each other better.

Trevor sings to Jamie on their bus, Ryan and Natascha cuddle on theirs. Matt tells Rudi that he likes her a lot and she is smokin’ but he really isn’t saying where his head is at. Matt, on the other hand, wants to find a significant other, but he has been through so much that he questions everything. Too many bad relationships have made him guarded and he is a little hesitant to say that he is falling for Rudi.

Three of the couples have arrived in the hotel, but one couple, Rudi and Matt are not there yet.

Everyone is getting worried that Matt and Rudi are still missing. Meanwhile, the two are fine – they just wanted to get away a little bit from everything. They stopped on the side of the road, and sit by a fire. She is hoping that they managed to break down some walls. They stay in a motel rather than join the rest in the hotel.

The next morning, the couples are surprised to see that Matt and Rudi are still not there. The first date card arrives, it is for Bri & Chris, “a love like this will last forever.” The two head to the little white chapel and the host asks them to sing a song for a beautiful couple that is getting married. Chris & Bri sing, “stand by me.” Chris tells Bri that he always wanted his dad to marry him because he was an ordained minister. He knows if his dad was there, he would be happy. Bri totally thinks about being engaged to Chris, and she hopes people on stage can see how they feel about each other.

Matt and Rudi arrive at the hotel, he tells Trevor that he is still trying to figure this thing out. He knows he likes her and thinks about her, but he is not sure if he is there yet or can get there. Rudi tells Jamie that it is hard, she is falling for Matt and doesn’t know what his feelings are.

A new date card arrives, this one is for Trevor & Jamie, “your love will keep you warm.” They arrive at T mobile arena and their names are in lights. They go inside, put on skates and skate around together. Meanwhile, Rudi is talking to Ryan that Jamie is in love with Trevor and she is going to tell him. She hopes that everything goes ok for her, she doesn’t want her freaking out or coming back crying. Trevor & Jamie sit down, there is a couch and a table on the ice, they have a bottle of champagne and time to talk.

Another date card, this one is for Rudi and Matt, “it’s you, it’s both of you.” The two head to a concert by Shaggi. Rudi and Matt are called upon the stage. After singing, the two sit down together. She tells him that she is really happy that she has had him this whole entire time, he has been her rock, seen so many sides of her. He gets her in a lot of ways that nobody does. She tells him that she is falling for him, she likes him a lot and can see herself getting there with him. And, she thinks she would regret not telling him that. He tells her that she is very courageous for speaking her truth and he appreciates her for doing that. She can’t hold back the tears, he obviously doesn’t share her feelings. Rudi gets up and leaves Matt on the couch. As much as he does like her, he wants to make sure that they are not rushing into this and he doesn’t want to say something that may not be true. She doesn’t think that he really likes her.

Natasha and Ryan get their date card and it reads, “it’s time to dig deep.” They are in the desert in Vegas, using some heavy machinery and having fun. They sit down and enjoy a toast together. Natascha thinks they have a good thing going. They get their song for the show, it is “Perfect,” by Ed Sheeran.

Bri & Chris get “Can’t Help Falling In Love With You,” by Elvis Presley. The two of them start crying.

Trevor & Jamie are performing, “Just A Kiss,” by Lady Antebellum.

Rudi’s last date went so badly, she told Matt how she was feeling and he didn’t reciprocate. They are performing, “Shallow,” by Lady Gaga and Bradley Cooper. When they are on stage together, everything is so much better.

Time for the show. The judges are former bachelor Ari and his wife Lauren. Three-time Grammy award winner from Train, Pat Monahan, and Ashley Simpson Ross and Evan Ross.

The first performance is Bri & Chris. Judges Comments: Lauren: “I think you guys are absolutely adorable. As you guys kept going you brought the energy up and you brought it.” Ari: “Bri I think you have hearts shooting out of your eyes.” Pat: “That is a hard song because it comes off low. I was taken by the two of you, I think you are a beautiful couple. I was getting emotional.” Ashley: “You two are adorable.” Evan: “Even in the beginning when the note wasn’t right for you, I liked how delicate you sang it, Chris.”

Jamie and Trevor are next. Judges Comments: Ashley: “I felt that the whole time, I could feel your energy. There was something natural going on with you guys.” Evan: “I could feel the love.” Pat: “Jamie you are so nervous, and kind of awkward at moments, it was so real and beautiful.” Ari: “It was really playful and innocent and easy.” Lauren: “I think you both have good chemistry, and I recognize that because we have it too. And, I think it makes for a very strong couple, you both were great.”

The last couple to perform is Rudi and Matt. Judges Comments: Ashley: “I can feel it, I can feel the heat, and that was really good, that was wow. You connected, you did your thing.” Lauren: “I think everyone can agree that you both are incredible performers, I loved it.” Pat: “It was really magical if you can turn that into original music and write your own songs and sing that great, and your guitar playing is really exceptional, I was like this is really stuff.”

Time for the Rose Ceremony, only three couples are going to the finals. The first couple to receive a rose is Jamie and Trevor. The next couple moving on to the finals is Matt and Rudi. The final couple receives a rose is Chris and Bri.

Trevor and Natascha are going home, and as it should be. She faked her way through this and Ati said it best when he said the performance was “put on.”