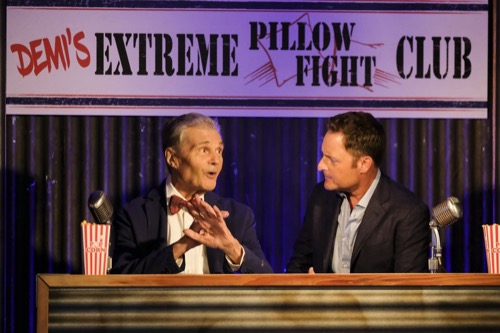 Meanwhile, Peter concentrates on having fun, going country line dancing with one smitten kitten, Victoria P., and Demi Burnett masterminds an “Extreme Pillow Fight Club” group date that sends feathers flying. However, Peter needs to confront his fear of falling for someone whose feelings aren’t genuine early on and struggles with his rose decisions.”

Victoria P. has the first date card today, Peter picks her up in jeans and a red checkered shirt. Peter and his friends love to line dance while shopping for cowboy boots, he shows Victoria P. how to line dance. Peter brings her to the Canyon, it is a country bar. Victoria P. couldn’t be happier to spend time with Peter after the last few stressful days over the champagne incident. This is Peter’s kind of date, he had so much fun with Victoria P., he is really happy. The chemistry is there, she just may be a good contender to be his dance partner for life.

Back at the house, Kelsey and Hannah Ann sit down to talk. Kelsey tells her that she will not tolerate her calling her a bully. Hannah Ann replies that the names that she called her did feel like she was being bullied. Meanwhile, the rest of the girls are so tired of the drama between the two. Both girls are talking, it gets very emotional and the two are crying. Later, the two join each other in hanger for dinner. Peter says the day went to good and he had a feeling it would go well. She allowed her heart to come through, she has a nurturing side. She tells him that she lost her dad when he was young and her mother fell into addiction.

She grew up in and out of shelters, her mother really struggled and she had to be the rock for them – sometimes, they didn’t even know if they would have food. Peter tells her that she is what matters to him and thanks to her for opening up to him, he can’t even imagine growing up like that. Peter tells her that he just knew this was going to work, he talked to God, and he just knew. He tells her that he has never been inspired by someone like her ever in his entire life and this feels so right, insanely right. Peter gives her the rose. Victoria things that Peter could just be her night in shining armor and the mean she is supposed to spend the rest of her life with.

Back at the house, a group date card arrives for: Kiarra, Sarah, Tammy, Kelley, Shiann, Savannah, Sydney, and Alayah – “I love surprises, I hope you do too.”

Demi is back on the Bachelor, and she is there to help Peter. Demi brings two girls with her who make a lot of noise and wake up all the women. Demi has brought outfits for the girls who are going on the dates; it mostly looks like lingerie. The date is designed by Demi and involves the girls participating in Demi’s extreme pillow fight club. Demi reminds the girls that they are there to fight for Peter’s heart. Fred Willard and Chris Harrison are the judges. Tammy and Kelley are the first two girls to slumber it out. Tammy is like a little Tasmanian devil, and she got herself disqualified. It doesn’t take long to get down to the final two; it is Sydney and Alayah. And the winner is, Alayah; she gets a big kiss from Peter.

The women are all dressed up for the cocktail party with Peter. Alayah couldn’t be happier to have won and been wearing a crown. Peter says it is cool that they all embraced their childhood and had fun during the challenge. Sydney thinks she was actually the clear winner. Alayah takes Peter away from the other girls for some private time alone. He tells her that she was quite aggressive, she shows off scratches on her arms and says that it was well worth it.

She says she wants to be more vulnerable with him, she has been abandoned in relationships in her life and it makes her feel insecure. Peter says that there is something about her that really draws him in. She tells him that one of her friends is a pilot wife and gave her some tips. He asks her how she likes dating a pilot, she loves it. Peter loves her positive vibe, he really connects with her and has so much hope in the two of them. Alayah goes back to the women and brags about her time with Peter. Sydney thinks Alayeh is fake and can’t wait for other people to see who she really is.

Alayah tells Sydney that she has always been a titleholder. Sydney tells her that she sounds so rehearsed and on all the time. Peter spends time with each of the women and at the end, he tells them that something is sticking in his mind, there are concerns that some women are not being real with him, and he saw first hand what happened last season, and he doesn’t want to be fooled and blindsided. Peter puts Sydney on the spot, that she was the one that said some women are different on camera and off camera. Sydney says that maybe Alayah puts on for the camera. Peter says that he just asks to be real and be raw. If they are not feeling it, he does not have time for that. Peter gets up and leaves. Alayah tells Sydney that she doesn’t know why she had to do that. Sydney says that her reactions are overboard. Sydney says again that when the cameras are on, she goes overboard.

Alayah goes to see Peter and tells him that she just doesn’t know what Sydney is talking about, she starts crying and saying it terrifies the heck out of her that he would think she was fake. Peter is so confused. He believes Sydney when she made those concerns, but when Alayeh went to speak to him, he believed her. He just doesn’t know what to do. Peter goes to see the girls, and he thanks Sydney for putting him first, he gives her the rose.

The next morning, Chris H. drops by and tells the ladies that Peter is going to join them for the day for a pool party. And, they should use their time wisely, after that, they go right to the Rose Ceremony with no cocktail party.

Peter takes Sydney to the side to speak to her in private. He apologizes to her for the night before, putting her in that position. Kelley then speaks to Peter and tells him that Sydney was not wrong, and she is not the only one. Alayah takes Sydney to the side and tells her that she should have been honest with her first before she spoke to Peter. Sydney doesn’t really care, she said what she did for Peter and is not going to apologize for it.

Peter sits down with Madison and asks her if she is replaying their date over and over in her head like he is. He tells her that he needs her really bad, to take his mind off what is going on. Meanwhile, Alayah is going from girl to girl and complaining about Sydney. Alayah goes to search out Peter and she tells him that last night was so hard, Sydney questioning her character. Peter says it is his worse fear to be brought this far with someone who is not genuine.

Peter asks Alayeh if she sees why some of the other women feel like she is putting it on for the cameras, she says no. Peter says he is drawn to her, there is just something that he likes, and he just wants to see Aliyah. They kiss.

Alayah feels amazing, she feels like she was knocked off a mountain and she climbed back up all on her own. Alayah goes to see some of the other women and tells them that she is back on track with Peter.
Peter thinks that he sees the truth with Alayeh, but he knows there are red flags.

Peter’s heart is saying one thing, but it is also telling him not to be fooled. He sits down with Aleyah again and says it is multiple girls that have brought up things about her. He has direct questions and he wants answers. He says that she has maybe been a little manipulative to some of the girls. Then he asks her if she asked Victoria to lie about knowing each other outside the house. She says she did it for both of them, she thought it might be an issue and didn’t want either of them disqualified.

He asks her if she can see it from his side, he just asked for everyone to be honest and truthful, and that doesn’t look genuine. Hearing that she tried to cover up that they know each other is wrong. He tells her that he has a lot to think about, gets up and walks away from her. Alayah is upset, and so is Peter; he left the pool party. The next time he sees the women will be at the Rose Ceremony.

Vitoria P. told the truth, and the fact that Alayah is upset, that is her fault.

Peter walks into the room with the ladies. He says that it has been a tough week, very difficult for him. Just being completely honest with all of them, he is even more confused now. He is doing his best at this, and it is not easy. The roses go to: Kelsey, Hannah Ann, Natasha, Lexi, Madison, Shiann, Kelley, Kiarra, Tammy, Savannah, Deandra. Peter leaves the room and goes to speak to Chris, who returns to the room with him and announces that there has been a change. Peter only has one more rose to give out, not two. There is a lot of tension in the room, and Peter gives the rose to Mykenna.

In the end, Peter goes with his gut feeling and sends Alayeh home.