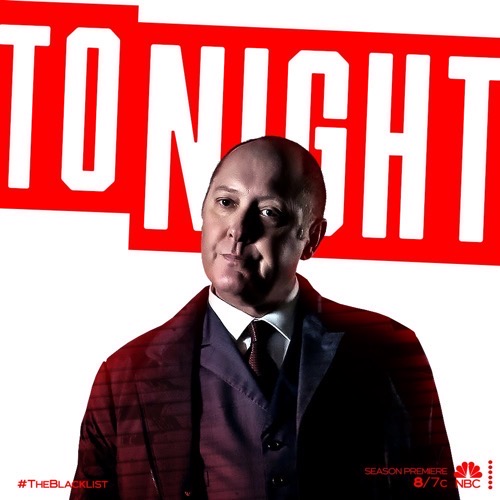 Tonight on NBC their hit drama The Blacklist starring James Spader premiere with an all-new Friday, November 13, 2020, episode and we have your The Blacklist recap below. On tonight’s The Blacklist Season 8 episode 1 called, “Roanoke”,  as per the NBC synopsis, “Red directs the Task Force to investigate a legendary criminal who organizes elaborate extractions. Meanwhile, Liz works to hatch a secret plan with her mother, Katarina Rostova.”

Red is with Dembe, he gets a call and says he will be right there. Then we see a doctor come to the aid of a Federal defendant that is under house arrest in a hotel, the patient may have been exposed to nuclear materials. The doctor goes into the room, the man doesn’t look good, he tells the officers to stay outside the room because it is contagious. Once the officers leave and the door is closed, the doctor takes off his mask and radios someone, and tells them they are in. The patient jumps off the bed, there is nothing wrong with him.

The man then goes to another room and takes a man who has an ankle monitor out of the room. They get him out by putting him on a stretcher and pretend that he is the patient.

Red talks to Liz about the Roanoke case. She says she sees that the tremors are gone, he says yes.

Liz updates the task force; General Coney gave combat-ready troops the slip in Uganda. Another person killed 290 in an apartment bombing that triggered the second Chechen war and then was never seen again. Both vanished and escaped capture by a man who calls himself Roanoke. They don’t know his name or even if he is alive. Red gave them the case because the next person who is supposed to disappear is Maddie Toliver.

But, she is not Maddie Toliver, she is Liz’s mother, Katarina Rostova. Park asks if Reddington realizes that her mother might get the death penalty if she is caught, Liz says yes and so does she. Cooper tells Liz that her allegiance has to be to them, not her mother.

The man Roanoke saved while pretending to be a doctor, is no longer alive, Roanoke shot him in the head.

Aram brings the task force some video footage of an ambulance that Roanoke escaped in, it is custom made.

The task force questions the police that was outside the hotel room. Meanwhile, Red helps Liz, he speaks to a man who helped Roanoke escape. He tells him that he wants Roanoke, or his name, the passport, the driver’s license that he provided him with. Red calls Heddy, asks her to reach out to her contacts at the IRS to track this guy done.

Liz and Ressler go to visit a guy who customizes vehicles, Ressler asks who hired him to make that ambulance. The guy sends the task force to a warehouse, they find plans of the hotel where they took the man.

Ressler asks Liz if they have her allegiance, she doesn’t answer him. Liz then goes to see Katarina, tells her that she lied to her. She told Liz that Roanoke was her escape plan, so she asks her why he is surveying the warehouse where her grandfather is being kept. Katarina says the only way that she can be safe is if Dom tells her everything that she needs to know and that won’t happen unless she gets him away from Red.

Liz tells her that she thinks it is time that she tells her everything. Katarina says that as a daughter of a domineering spymaster she never had a voice, she was 15 the first time they ordered her to sleep with a young American soldier. Dom was the man who ordered it.

The reason Katarina gave up Liz was to spare Liz her fate. Katarina goes on to say that Liz was safe until Red pulled her into everything that she was trying to protect her from. She doesn’t know who Red is, but he betrayed her. They tried to murder her to bury their secrets. Katarina talks about N13, an operative, and KGB mole, all the leads and they can’t find him. Dom set her up, he leaked to the KGB that she was N13. She thinks Red or Dom is N13. Katarina tells Liz that Red manipulated her to get his hands on top of US intelligence.

Red didn’t choose her, he needed her. He gives her criminals and in return, he learns the names of every high-level official working in America justice, law enforcement, and intelligence. Liz understands Katarina now. Katarina tells Liz that she gave her the truth and now it is up to her to do what she wants with it.

Liz goes to see Red and tells her that she has a break in the case, but first, she asks him when her mother abducted him in Paris, what did she want. Red tells her that he has things that are his and no one else’s, he won’t answer her. Then she tells him that Dom is Roanoke’s next target. Liz says she can’t lose him like this.

Liz is in the office, Ressler asks her if she is ok. Liz says that she realizes that her mother cannot be trusted. She then tells the task force that Dom is the next target and she could attack at any minute. Cooper says they will assist Red.

Red is on the phone with Heddy, she is Peurto Rico and she thinks she may have found Vega.

Liz is alone with Dom, he says he knows she is angry with him and she doesn’t blame her. The move is on, Red has secured a loge where they are going to take Dom. Meanwhile, Roanoke is with Katarina and they are listening to the task force moving Dom, Roanoke tells her that he can’t believe she got Liz to wear a wire.

Dom is on the move, Liz is driving the van and he tells her that whatever she is doing, don’t do it. Red calls Liz and tells her it’s a set up they need to get off the highway. Liz tells him that she will be gone by then, but don’t worry Dom will be safe, she promised that much.

Red tells Harold that they have to find them. Harold tells her that all Liz wanted to know was the truth about her past. They will find her because they are concerned about her because she broke the law. Cooper is upset with her, but he is very angry at Red because of what he has done to Liz. Harold tells Red that his assistance is not required.

Cooper speaks to the Task Force, Liz has betrayed the team and they need to find her. Liz text Ressler and tells him they need to meet.

Ressler meets Liz and asks her what she wants. She says time, to figure out things. He is angry at her for lying to him. He tells her that she sabotaged an FBI investigation. He begs her to go in with her, he will back her. She tells him that she needs him to keep believing in her, she kisses him. He says he won’t give up on her, but he still has to do his job. She pulls a gun on him before he does on her, and she leaves.

Liz goes back to Katarina and tells her that she just walked away from the only friends she has. And, Dom, they are not going to hurt him. Meanwhile, Red tells Dembe that he lost Liz.