The Bold and the Beautiful Recap: Thursday, August 6 – Steffy Happy When Finn Drops By – Shauna In LA Permanently 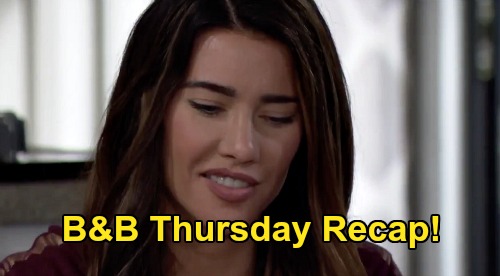 The Bold and the Beautiful spoilers recap for Thursday, August 6, reveal that Steffy Forrester (Jacqueline MacInnes Wood) talked with her nanny via phone, then sank into a chair, experiencing great pain and glancing at her painkiller bottle as she did so. Ridge Forrester (Thorsten Kaye) called to check in on Steffy, who said she was about to jump on a conference call. Ridge will remind Steffy not to be a hero and to call if she needs anything. After hanging up, Ridge will flash back to being with Shauna in Las Vegas.

At the beach house, Shauna Fulton (Denise Richards) will be visiting with Flo Fulton (Katrina Bowden) and Wyatt Spencer (Darin Brooks). Turns out, Shauna came to see Flo after hearing about everything that went down with Sally Spectra (Courtney Hope). Shauna was happy to see that Flo and Wyatt were together and more in love than ever.

Wyatt took off for work, and Flo and Shauna talked privately. Flo quizzed Shauna about what was going on with her and Ridge. Together, Shauna and Flo rehashed Ridge and Shauna’s trip to Las Vegas after Ridge saw footage of Bill Spencer (Don Diamont) and Brooke Forrester (Katherine Kelly Lang) kissing. Flo noted that Ridge came home to be with Brooke, yet Shauna was back in Los Angeles. Flo wanted to know what was up.

Flo got more details about how Ridge stayed at Shauna’s house in Vegas, and eventually Flo asked if Ridge and Shauna had slept together. Shauna didn’t answer, saying, “What kind of question is that to ask your mother?” But Shauna did say that Vegas was her past and that LA was her future.

Back at the cliff house, Steffy got a call from Dr. John “Finn” Finnegan (Tanner Novlan). Finn wanted to know how Steffy was managing with the pain and if she followed up with her primary care physician. After a brief conversation, Steffy and Finn ended the call, and then Thomas Forrester (Matthew Atkinson) walked in with flowers and a present for Steffy from Vinny Walker (Joe LoCicero). “I’m thinking he developed a major crush on you,” Thomas said.

Thomas asked how Steffy was doing, and Steffy said that she still didn’t remember the accident. Steffy reached for something and exclaimed in pain, prompting Thomas to ask if she was ok. Steffy took a pain pill, noting that she didn’t have many left and that she was hoping to feel better before she needed a refill. Soon, Thomas got a call and had to go.

Later, Steffy’s doorbell rang, and she checked the security monitor app on her phone, smiling when she saw that it was Finn. Finn entered with some follow-up paperwork, wondering if Steffy had gotten his assistant’s call. Steffy replied that she had been on a conference call. Finn apologized, saying he wouldn’t normally do this, but he lived nearby and thought he’d drop off the paperwork himself.

In the Forrester CEO office, Ridge was sketching when Brooke walked in to tell him she was leaving to go visit with Bridget Forrester (Ashley Jones) for a few days. Brooke said that she really wanted to work through their issues, and that it hadn’t been easy on her. Brooke acknowledged her kiss with Bill, and she said that she knew it was wrong right after it happened.

Brooke referenced Ridge’s trip to Vegas with Shauna, and Ridge had some more flashbacks from the trip, including being in front of a wedding chapel. Brooke went on, saying that their bond is strong and that nothing can keep them apart. Ridge spoke a bit about how hurt he was that Brooke turned to “Spencer” and that he perhaps overreacted.

Brooke noted that they were still married and still love each other, and that when she comes back from her trip, she wants them to move forward. Ridge said it was all he ever wanted, and that he wanted to spend the rest of his life protecting Brooke. “So, if you want to go see Bridget, go. Then come back here because I’ll be waiting for you.” Brooke and Ridge hugged and kissed happily.

There’s a lot of B&B drama heating up, so stay tuned! We’ll give you updates as B&B news comes in. Stick with the CBS soap and remember to keep CDL bookmarked so you don’t miss any of the latest daily recaps, B&B spoilers, and ongoing news.