BY Heather Hughes on May 15, 2020 | Comments: Leave Comments
Related : Soap Opera, Spoiler, Television, The Bold and the Beautiful 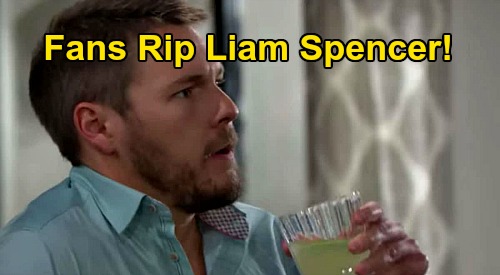 The Bold and the Beautiful (B&B) spoilers reveal that fans have been reflecting on B&B history through some classic throwback episodes. The show’s been delivering some fun theme weeks featuring fashion, weddings, drama and more. Since Liam Spencer (Scott Clifton) is one of The Bold and the Beautiful’s top leading men, he’s naturally been in many of the more recent classics.

However, these repeat viewings have reminded some fans of just how unworthy Liam is as a love interest. Liam goes back and forth from woman to woman and wedding to wedding. There’s never a firm commitment and he doesn’t put the same energy into his relationships as his romantic partners.

On Twitter, The Bold and the Beautiful viewers have been calling out lazy Liam and his flip-flopping tendencies. B&B fans have been ripping this waffler to shreds! We’ve all watched Liam bounce between Hope Logan (Annika Noelle) and Steffy Forrester (Jacqueline MacInnes Wood) over the years, but these classics have really highlighted the horror of it all.

“Steffy deserves a man that show grand overtures like she does!” one angry fan tweeted. “When has Liam done anything besides stand at the end of the aisle & wait? No grand gesture during the wedding to show his love, nothing! #BoldandBeautiful These throwbacks really enforce Liams laziness in relationships!”

“Liam does not deserve the thought and effort Steffy gives to their relationship,” another Bold and the Beautiful viewer said. “Some things never change. Liam is consistently never there when she needs him,” one more fan insisted in a tweet about Hope. “Such a lame romantic lead most of the time.”

Other B&B fans marveled at the sheer number of weddings Liam has had. Scott Clifton has called his character the “waffle king” before and that seems like a title Liam has definitely earned! After seeing these throwback reminders, plenty of viewers are calling for changes.

Liam needs to stick with one woman and let the other one move on. Since Liam’s currently with Hope, some fans are hoping that relationship will last for a while. Steffy needs to truly move on because “Steam” reunions only end in pain and disaster.