BY Heather Hughes on May 15, 2020 | Comments: Leave Comments
Related : COVID-19 NEWS, Soap Opera, Spoiler, Television, The Bold and the Beautiful 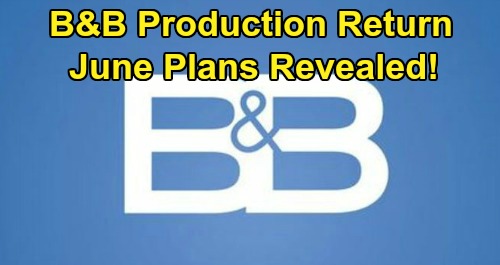 The Bold and the Beautiful (B&B) spoilers reveal a major news update about the production shutdown at the CBS soap. Everyone’s wondering when B&B will begin filming new episodes, but the answer remains unclear. However, Deadline did offer up some details about the show’s plans following the COVID-19 aka coronavirus crisis.

According to a memo that was said to be sent out to the cast and crew, “…The Bold and the Beautiful production company is currently getting ready to resume production in June. Sources stressed that this is just a projected start date and, while the producers are making preparations, the situation remains fluid.” They also noted that official safety protocols would need to be followed in order to film.

Of course, we should point out that the date for getting everybody back on set has already changed multiple times. When production was suspended back in March, it was only supposed to be for two weeks.

That was naturally extended and was later extended again according to Scott Clifton (Liam Spencer), who spoke about the topic in a recent Q&A session with fans.

“We were told, all of us, the whole cast, that we were going to try for mid-May, so like, May 15th-ish. But we’d been told, we had been given other dates before that, that didn’t pan out because things keep changing,” Clifton said in a live-tweet.

Clearly, that May start date was pushed back to June and will likely get pushed back again. Nevertheless, Katherine Kelly Lang (Brooke Logan) seems to have gotten this June memo based on a recent Instagram comment.

When asked about returning to work, Lang confirmed next month was the plan. “June … I wish we could go back right now!” Lang said.

We should note that the stay-at-home order was extended for three months in LA County. That seemingly makes it unlikely that this June projection will pan out any more than the one in May did. It’s tough to predict exactly when the cast and crew will be able to get back in the studio.

General Hospital stars seem far less optimistic about resuming production as soon as June, so that’s worth mentioning. On Twitter, Nancy Lee Grahn (GH’s Alexis Davis) suggested they wouldn’t return to work before August, so it’s doubtful The Bold and the Beautiful or any other soap will get the greenlight before GH.