The Bold and the Beautiful Spoilers: B&B Kids Rapidly Aged For New Episodes – Will Spencer a Rebellious Teen for Bill & Katie? 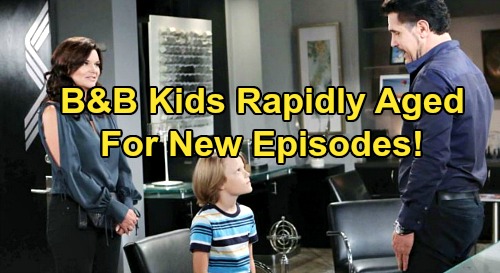 The Bold and the Beautiful (B&B) spoilers reveal that the CBS soap has been forced to make some story adjustments thanks to the new safety protocols on set. No one wants the cast and crew any more at risk than they have to be, so everybody at B&B’s working hard to follow the rules. As part of this new push for safety, scenes involving child actors have been removed for now.

With that in mind, we have to consider the possibility that The Bold and the Beautiful might rapidly age at least one of the kids. If so, we should also think about which one that might be. Which B&B character would benefit most from SORASing? That’s Soap Opera Rapid-Aging Syndrome if you’re wondering!

Douglas Forrester (Henry Joseph Samiri) has been a huge part of the action and many viewers have grown attached to the little fella. B&B had already aged Douglas up quite a bit when Samiri took over, so all that makes Douglas SORASing unlikely just yet.

There’s also still a lot of drama to play out through Douglas. Liam Spencer (Scott Clifton) and Hope Logan (Annika Noelle) have taken on raising another young child, so that’ll complicate their world. This could easily bring a custody battle with Thomas Forrester (Matthew Atkinson) at some point – even if Douglas has to stay offscreen for it.

It would also be weird to rapidly age Beth Spencer (River Davidson and Madeline Valdez) or Kelly Spencer (Avalon and Colette Gray) so soon. It’s one thing to age them up by a few years or something, but there’d be no advantage to that. Again, kids aren’t being allowed on set for the time being.

There’s also the fact that Thomas, Liam, Hope and Steffy Forrester (Jacqueline MacInnes Wood) don’t look old enough to have teenagers – and the only real benefit here would be making one of the kids a teenager. The show would have to cast someone old enough to be able to film.

Taking all that into consideration, we can probably rule out SORASing for Douglas, Kelly and Beth right now. Will Spencer (Finnegan George), on the other hand, might be a prime candidate for rapid aging. It’s easy to imagine Bill Spencer (Don Diamont) and Katie Logan (Heather Tom) with a rebellious teenage son. Will might have some strong opinions on Bill’s latest destruction of “Batie.”

Some interesting stories would result from aging up another Spencer. After all, Will has always been Bill’s “Mini Me” who likes money. Maybe Will could grow up to be far more like Bill than his brothers, Liam and Wyatt Spencer (Darin Brooks). Will could be quite the schemer and perhaps work with Bill at Spencer Publications through an internship program.

This is just fun speculation until the show confirms their plans, but it’s an intriguing idea to mull over. We’ll give you updates as other news pops up. Do you think B&B should rapidly age Will Spencer? Should they make Will a teen and give him a dark Spencer edge?