BY Heather Hughes on February 25, 2020 | Comments: one comment
Related : Soap Opera, Spoiler, Television, The Bold and the Beautiful 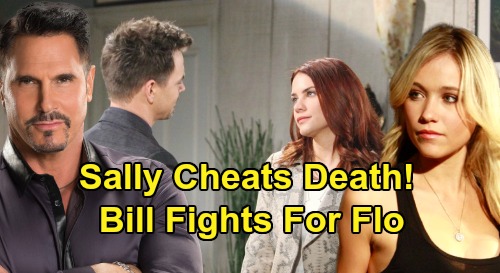 The Bold and the Beautiful (B&B) spoilers tease that Bill Spencer (Don Diamont) could find himself quite involved in his son’s love life. Wyatt Spencer (Darin Brooks) has always had to deal with plenty of meddling from Quinn Forrester (Rena Sofer), which probably isn’t going to change. Bill may also become a bit of a meddler depending on how Wyatt’s current storyline plays out.

B&B fans know Sally Spectra (Courtney Hope) is fighting a battle she supposedly can’t win. Her doctors have given Sally a terminal diagnosis, so Sally’s just waiting to die at this point.

That’s why Wyatt will soon step up and give Sally the life she deserves in her final weeks. With Flo Fulton’s (Katrina Bowden) full approval, Wyatt will reunite with Sally and make sure she’s as happy as she can possibly be.

However, The Bold and the Beautiful spoilers say Sally will survive beyond the expiration date she was given. There’s a good chance Sally will be cured down the road, which could leave Wyatt torn.

It’s possible Wyatt will want to stay with Sally out of obligation, but he could fall back in love with Sally, too. Wyatt may feel like he’s destined to be with Sally if she survives this terrible ordeal.

Bill has sympathy for Sally at the moment, but that could change if she recovers. The Bold and the Beautiful spoilers say Flo’s sacrifice will impress Bill – and he’ll be sure to let her know.

Although Bill had some issues with Flo following the baby swap reveal, she saved Katie Logan (Heather Tom) with a kidney donation. Bill will be eternally grateful for that, so he’s more on “Team Flo” now.

Th Bold and the Beautiful spoilers, updates and news say Bill will give Flo plenty of praise. He’ll want Flo to know how amazing it is that she’s stepping aside. Bill may point out that not every woman would be willing to do that.

What happens if Flo’s ultimately pushed aside for good? Once Wyatt reunites with Sally, will it become permanent? If so, Bill may have something to say about it.

Bill might decide he needs to fight for Flo as a better match for Wyatt. Father knows best! B&B parents tend to be too wrapped up in their adult children’s love lives, so this wouldn’t be too shocking. It could even open the door to a Flo and Bill romance if The Bold and the Beautiful writers wanted to take that route.

Regardless, Wyatt’s torn heart could lead to problems eventually. As other updates emerge, check back here at CDL for all the latest Bold and the Beautiful spoilers and news.