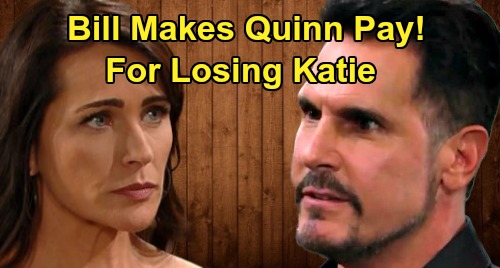 Of course, Bill and Brooke really only have themselves to blame since they’re the ones who betrayed their partners. That’ll undoubtedly be what Quinn argues as she tries to smooth things over with an angry Eric Forrester (John McCook).

Quinn will get why Eric’s upset with her, but she’ll think he should really be upset with Brooke and Bill. Their wandering lips are what got them in trouble.

Quinn was just the messenger in a way, but she could’ve handled the situation with more tact. Eric will be frustrated over Quinn reverting to her scheming ways and setting out to hurt Brooke. The Bold and the Beautiful spoilers say Eric will want to end this war once and for all.

Eric may even demand it if Quinn expects to keep this relationship going. He’ll be fed up with the constant conflict and Quinn’s twisted plans. However, there’s someone else who’ll be even more fed up with Quinn – and that’s “Dollar Bill.” Since Katie won’t be forgiving Bill anytime soon and Brooke will keep suffering as well, Bill’s rage will grow stronger.

Bill will have plenty of time to stew and plot in the coming episodes. During the week of April 13-17, Bill will corner Quinn and deliver a fierce threat. Quinn probably won’t be afraid of Bill, but maybe she should be!

After all, Bill’s only been on a better path these days because of his family. Katie and Will Spencer (Finnegan George) have been Bill’s priority, so he’s been trying to do the right thing.

What happens if Bill doesn’t have to live up to Katie’s high standards? Things could end in disaster for Quinn if Katie doesn’t take Bill back. Bill may feel like he doesn’t have much to lose! Regardless, Bill’s proven that he can be a very vengeful man.

The Bold and the Beautiful spoilers say Quinn should watch her back. It may be a mistake to underestimate Bill’s power and the desire for payback.

As other B&B news becomes available, CDL will have more updates to pass along. Are you excited about Bill and Quinn’s showdown? Do you hope Bill makes Quinn pay for his heartache? Stick with us for all the hottest Bold and the Beautiful spoilers, updates and news.