BY Heather Hughes on April 3, 2020 | Comments: one comment
Related : Soap Opera, Spoiler, Television, The Bold and the Beautiful 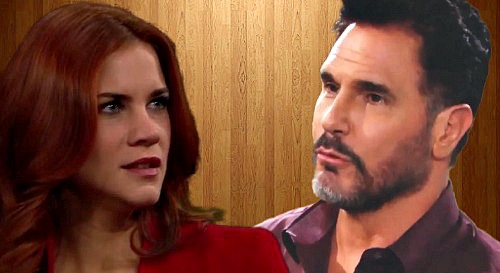 The Bold and the Beautiful (B&B) spoilers tease that Bill Spencer (Don Diamont) will wait for Katie Logan (Heather Tom) to come around. Bill intends to fight for his family with Katie and Will Spencer (Finnegan George), but Katie certainly won’t be ready to let this go anytime soon. She feels deeply betrayed by Bill and Brooke Forrester (Katherine Kelly Lang), so forgiveness is a long way off.

Of course, we have to wonder how long Bill’s really willing to wait. As the days turn into weeks or even months, Bill may begin to lose hope. At some point, Bill may accept that he’s blown it and decide to throw in the towel. “Batie” may be over “for good” – which actually means until B&B writers run out of other options and put them back together.

However, it could be years before that happens. It all depends on what The Bold and the Beautiful has in mind for Bill next. We know Bill will deliver a vicious threat to Quinn Forrester (Rena Sofer) during the week of April 13-17.

Bill will undoubtedly focus on revenge if Katie turns her back on him. Will’s surely going to struggle over his parents’ split, so that’ll add to Bill’s anger.

Even so, Bill’s the kind of guy who needs a little love in his life. He can’t go too long without a love interest, so Bill may need a new woman. If Bill and Katie don’t reunite, who could be Bill’s next leading lady? Let’s consider an interesting option and ponder how B&B could bring a new pairing together.

Sally Spectra (Courtney Hope) is on a mission to make Wyatt Spencer (Darin Brooks) her main squeeze again, but there are couple problems. For starters, Wyatt loves Flo Fulton (Katrina Bowden) and that bond won’t be easy to break. There’s also the matter of Sally’s cruel lie – a lie that Bill’s all too familiar with.

Bill once orchestrated a scheme to help Caroline Spencer (Linsey Godfrey) win Thomas Forrester (Matthew Atkinson) back. After Bill fibbed about Caroline’s terminal diagnosis, he pushed Thomas to do what’s right and be there for his “dying” ex.

That sounds familiar, doesn’t it? How can Bill judge Sally when it was his idea for Caroline to do the exact same thing?

As a result, Bill may have a bit of sympathy after Sally’s plot blows up. He may see some of himself in Sally – a schemer who makes mistakes and just wants to be loved. Bill and Sally have a complicated history, but that’s just another great reason to pair them up The tension of the past could become the passion of the future.

It’s high time The Bold and the Beautiful did a couple that’s somewhat out of the box, so this one would fit the bill. It’d surely catch Sally and Bill by surprise, too. Not to mention it’d be soapy fun for Sally to burn Wyatt only to get together with his father! If any news surfaces on a Bill and Sally bombshell, we’ll be sure to give you updates.

Could you see Sally and Bill falling for each other? Should B&B at least let them commiserate down the road and hook up? CDL will have other scorching Bold and the Beautiful spoilers, updates and news posts, so be sure to check back frequently.