The Bold and the Beautiful Spoilers: Brooke’s Gone Off The Deep End – Blames Thomas & Quinn, Needs To Look At Herself 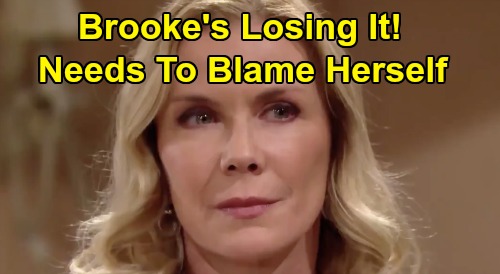 The Bold and the Beautiful (B&B) spoilers tease that Brooke Forrester (Katherine Kelly Lang) seems to be egging on wars right and left. As B&B viewers know, she’s been in a serious war of words with Thomas Forrester (Matthew Atkinson) for several months now.

While it’s true that Thomas has done some truly awful things in the past, Brooke has taken her distrust and dislike of Thomas to new heights.

Of course, most of her animosity toward Thomas has arisen because of his lies and manipulation as they’ve related to her daughter, Hope Logan (Annika Noelle). Brooke just can’t seem to move past how Thomas helped keep the secret about Hope’s daughter, Beth Spencer (River Davidson and Madeline Valdez).

Now, what Thomas did to Hope in keeping her from Beth and manipulating her into a marriage was horrible, but in many ways Brooke’s rage seems a bit blown out of proportion.

After all, she did push Thomas off of a cliff in what really looked like a premeditated move, yet nobody is saying that she’s a psychopath or needs inpatient psychiatric treatment. However, she thinks that Thomas is irredeemable for what he’s done.

And then there’s the current situation that’s brewing between Brooke and Quinn Forrester (Rena Sofer). Brooke never seemed to be hostile toward Quinn in the past. Sure, the two weren’t best buddies, but they always seemed to get along well enough.

And then Brooke learned that Ridge Forrester had consensually kissed Shauna Fulton (Denise Richards) and she immediately blamed Quinn for it.

And that wasn’t all. Over a few kisses between two other consenting adults, Brooke marched into the Forrester mansion and demanded that Eric Forrester (John McCook) divorce Quinn immediately and throw her out on the street…as if Brooke owned the place.

It really seemed out of control, and one wonders if Brooke is really ok.

Of course, none of this is to say that Brooke shouldn’t be upset that Ridge kissed someone else. She feels the way she feels, but to displace the bulk of her anger onto Quinn when (a) Ridge is a grown man who decides who he kisses, (b) Quinn wasn’t even the person he kissed, and (c) Brooke is the one who initiated her separation with Ridge in the first place just seems strange.

At any rate, it seems like Brooke has some pretty serious control issues. She wants things her way – and this was evident back when she took the liberty of having adoption papers drawn up for Hope and Liam Spencer (Scott Clifton) before she had even asked Liam whether he wanted to adopt Douglas Forrester (Henry Joseph Samiri).

As it turns out, Liam didn’t want to take on a third child, but that didn’t seem to matter to Brooke.

We’ll see what happens going forward, but it seems like Brooke is really going to make herself miserable if she keeps going at this rate. She’s on the verge of losing Ridge permanently because of her stance on Thomas, and according to B&B spoilers, Quinn is going to start making her life really difficult in short order.

What do you think about all of this? Does Brooke just need to take it down a notch? Stay tuned to B&B and don’t forget to check CDL often for the latest Bold and the Beautiful spoilers, updates, and news.