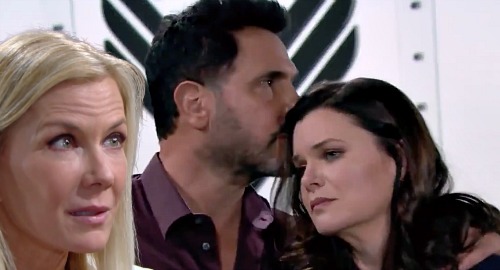 The Bold and the Beautiful spoilers suggest that there could be war coming between Katie Logan (Heather Tom) and her sister, Brooke Logan (Katherine Kelly Lang). As many B&B fans know by now, that’s because Brooke kissed Katie’s husband, Bill Spencer  (Don Diamont). Will Katie’s marriage be torn apart because Brooke and Bill locked lips?

The Bold and the Beautiful Spoilers – Bill Sleeps on the Couch

B&B fans know that Bill has already pleaded the stereotypical, “It meant nothing!” argument to his wife, Katie. However, Katie isn’t likely to be able to forget the image of her husband sticking his tongue down her sister’s throat.

The video, which Quinn Forrester (Rena Sofer) showed everyone, highlighting Brooke’s kissing skills, isn’t something that Katie will just sweep under the rug. Of course, Bill didn’t sleep with Brooke (that anyone knows about yet) and that’s something.

However, Katie may be like many others who consider kissing outside the bounds of marriage to be an act of cheating.

This begs the question then, what consequences does Bill face? Well, in the short term Katie might not let Bill sleep in the same bed. Katie might be so angry that she banishes Bill to either another bedroom or to the couch for the foreseeable future.

If Katie decides that she needs to reevaluate her marriage with Bill, the consequences for that one little kiss could be a heck of a lot greater than sleeping on the couch.

Now Katie and Brooke have had serious problems in the past. Brooke’s kiss with Bill isn’t the first time that Brooke has moved in on Katie’s territory. Some B&B fans may remember that Brooke has stolen more than one man from her sister.

While Katie has apparently attempted to forgive Brooke for her many trespasses, there comes a time when enough is enough. B&B viewers may find that in the near future Katie will decide to banish Brooke from her life for good.

If Katie doesn’t banish Brooke from her life forever, she may insist that Brooke get some serious psychiatric help. Brooke is a compulsive, serial cheater after all. Who more than Katie knows that Brooke has slept with a ton of men and almost all of them were married to other women when Brooke first became attracted to them? (Well, all the other wives know it as much as Katie.) In any case!

Just how long will Katie allow Brooke to do as she wishes, beg forgiveness, and receive it … only to commit the same offence over and again? At some point, surely Katie will realize that Brooke is behaving like a dog that returns to its vomit! If there is any recovery possible for these two B&B characters, it’s likely to be a long and painful process.

On the flip side, Katie has forgiven Brooke for so much in the past. In fact, when Katie found out about Brooke’s indiscretion with Bill, B&B fans know that she was furious! However, Katie wasn’t as angry about the kiss as she was that someone told her about it!

Katie loves Brooke and Bill, and apparently, she could have lived her life just fine never knowing that her husband and sister were getting physical behind her back. It could be that, but then it might also be that when Katie considers the fallout that is sure to occur when a light is cast upon sin … she simply agrees that ignorance is bliss. Come back to CDL for all of your The Bold and the Beautiful spoilers, recaps and news.