BY hellodrdavis on March 2, 2020 | Comments: one comment
Related : General Hospital, Soap Opera, Spoiler, Television, The Bold and the Beautiful 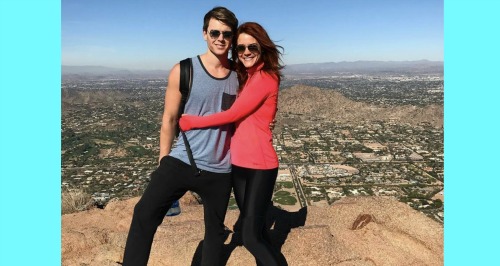 The Bold and the Beautiful (B&B) spoilers has some great news to pass along about a popular B&B star. Courtney Hope, who portrays Sally Spectra on the CBS soap, recently shared with her Instagram followers that she’s celebrating a very special anniversary with her significant other, who happens to be Chad Duell (Michael Corinthos, GH).

Courtney shared a photo of she and Chad hiking, along with the following caption: “Four years with this man has been undoubtedly adventurous and transcendent. I’m very happy to be madly in love with my best friend. Here’s to a lifetime more of memories. Happy anniversary babes, I love you @duelly.”

Chad quickly responded to Courtney’s post, saying simply, “I love you.” And fans have been replying in droves to the post as well, with one saying: “Happy Anniversary to you both. You are so good together. Always be as happy as you are today – enjoy.” And anther commented: “Happy Anniversary!!!! Love you both!!!!! Two of my favorite actors. You’re both amazing at your craft. Enjoy this wonderful milestone in your lives.”

It’s great to see Courtney and Chad together and happy. If you’re fortunate enough to follow either or both of them on social media, then you know that they frequently post about what they’re up to and their various adventures together.

In fact, on his own Instagram feed, Chad posted a picture of them together at home on Valentine’s day, along with a sweet message of his own: “Happy Valentine’s Day everyone! Especially to this beautiful and amazing woman! I love you!” To that, Courtney responded: “Love you, handsome.”

Of course, for Courtney’s character Sally, things aren’t looking as great right now. B&B viewers know that she’s recently been diagnosed with a terminal illness, and so she’s preparing for the final weeks of her life. It’s definitely a bittersweet time for Sally, as she’s just reunited with Wyatt Spencer (Darin Brooks), even though Wyatt really wants to be with Flo Fulton (Katrina Bowden).

On the other hand, things have been looking up for Chad’s character Michael, as he has recently been reunited with his biological son, Wiley Corinthos (Erik and Theo Olson) after thinking for a long while that Wiley was his godson and the biological child of Willow Tait (Katelyn MacMullen). He’ll have a lot of adjustments as he gets used to full-time fatherhood.

But for Courtney and Chad, they seem to be in a great place with each other. Four years is quite a milestone, and we wish them all the best! Stick with the Bold and the Beautiful and be sure to check CDL often for the latest B&B spoilers, recaps, and news.

Four years with this man has been undoubtedly adventurous and transcendent. I’m very happy to be madly in love with my best friend. Here’s to a lifetime more of memories 😝 Happy anniversary babes, I love you @duelly 🥰