BY Heather Hughes on March 7, 2020 | Comments: one comment
Related : Soap Opera, Spoiler, Television, The Bold and the Beautiful 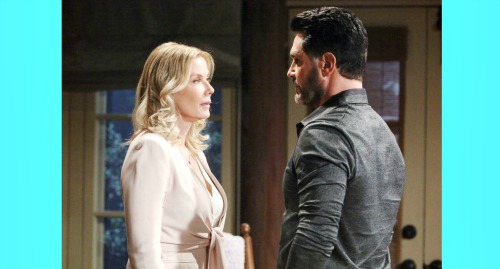 The Bold and the Beautiful (B&B) spoilers tease that Bill Spencer (Don Diamont) has a new storyline kicking off during the week of March 9-13, which is great news for Bill fans. It’s also great news for Diamont, who’s been on the backburner for a while now. In an interview with Soap Opera Digest, Diamont opened up about that and shared what he’s hoping to see moving forward.

Bill and Brooke Forrester (Katherine Kelly Lang) will soon find themselves locking lips, which will catch them both off guard. Of course, this probably doesn’t surprise too many B&B viewers!

Most of us expected Brooke and Bill would battle more temptation eventually. They can never stay away from each other for too long, so we were overdue for another round of “Brill.”

Diamont reflected on Bill’s motives in this upcoming moment and insisted they’re pure. “Bill is a compassionate guy and it really is not planned in any way,” Diamont said. He added that it’s just about comforting Brooke and making her feel heard in a way that Ridge Forrester (Thorsten Kaye) isn’t hearing her.

Diamont went on to talk about his character and how some things never change. “The past is rearing it’s ugly head again,” The Bold and the Beautiful star insisted. “Bill doesn’t go there with any intention, and Brooke is vulnerable, and Bill is Bill.” Diamont also talked about Brooke and Bill’s rich history, which he’s sure is coming into play along with their emotions.

How does Diamont feel about diving back in for more drama? He’s excited about it! Diamont confessed that he’s not used to being back-burnered, so he’s anxious to get off the story sidelines and stir up some classic Bill trouble.

Although a Bill and Brooke reboot may be a tad too repetitive for some, Diamont seems to be embracing it. He had an enthusiastic reaction when he first learned about the kiss.

“When I saw that in the script, my first thought was, ‘Here we go again!’ and I was glad to see something going on,” Don Diamont said. He’s being kept in the dark on future story plans, but he’s hoping for good things. The Bold and the Beautiful spoilers and updates suggest there’ll be a lot to look forward to in the coming months.

Are you glad “Dollar Bill” is getting a story again? Are you hoping for a full-fledged Bill and Brooke reunion? As other B&B updates emerge, be sure to stop by again soon for the latest news. CDL will have plenty of hot Bold and the Beautiful spoilers to pass along.