BY Heather Hughes on January 27, 2020 | Comments: one comment
Related : Soap Opera, Spoiler, Television, The Bold and the Beautiful 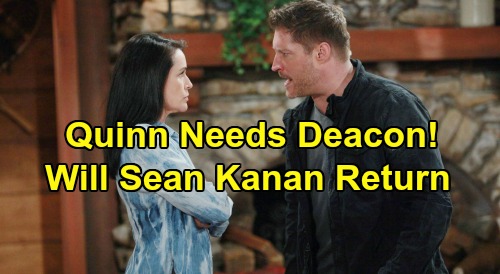 The Bold and the Beautiful (B&B) spoilers tease that Quinn Forrester (Rena Sofer) is headed back to the dark side, which could put her marriage in jeopardy. B&B fans know Brooke Forrester (Katherine Kelly Lang) wants Eric Forrester (John McCook) to end his relationship with Quinn. She thinks Quinn’s toxic and has no business being in the Forrester mansion.

Of course, it’s not really Brooke’s place to come into Eric’s home and demand his divorce. Only Eric can make that call, but Quinn’s still furious over Brooke’s marriage meddling. She intends to make Brooke pay, but will her efforts cross the line? Quinn could end up being her own worst enemy here.

Since we’re getting crazy, dark Quinn back, she’s no longer going to be a good match for Eric. He can only tolerate the sane, safe Quinn he’s come to know – the boring Quinn if we’re being honest! It’s been nice to see Quinn revert to bad girl mode again, and that side of her is only going to intensify.

The Bold and the Beautiful spoilers have yet to reveal if Eric and Quinn’s relationship will survive this upcoming war with Brooke but the possibility of a breakup is there. Nothing would satisfy vindictive Brooke than to see the destruction of Quinn’s marriage end with an ugly split with Eric.

Given the possibility of a split with Eric we need to take acknowledge that every bad girl deserves a bad boy, so maybe it’s time for B&B to think about a big comeback. Should The Bold and the Beautiful put Deacon Sharpe (Sean Kanan) back in the mix?

Deacon used to be a fun partner in crime for Quinn. Perhaps Deacon should score his release from prison and return for a Quinn reunion.

The timing would be great since Thomas Forrester (Matthew Atkinson) is still fixated on Hope. How would Deacon feel about creepy Thomas obsessing over Hope? Deacon surely wouldn’t approve of Thomas’ manipulation, so there’d be some interesting ways for him to get involved in Hope’s story.

As for Quinn, she’s going to need another love interest if her marriage to Eric implodes. B&B fans tend to like when old characters resurface, so why not Deacon? Quinn and Deacon would definitely stir up another round of mischief together! Would you like to see Sean Kanan reprise his role as Deacon Sharpe?