The Bold and the Beautiful Spoilers: Eric Reunites With Brooke – Quinn Abandoned and Miserable After Being Dumped?

BY hellodrdavis on March 23, 2020 | Comments: 3 comments
Related : Soap Opera, Spoiler, Television, The Bold and the Beautiful 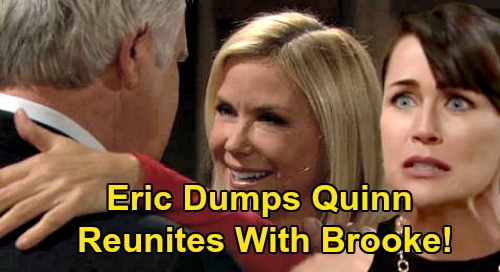 The Bold and the Beautiful (B&B) spoilers tease that things are about to get dicey among the Forrester clan. As B&B viewers know, Donna Logan (Jennifer Gareis) has just spotted the shocking video of her sister Brooke Forrester (Katherine Kelly Lang) and Bill Spencer (Don Diamont) kissing. And it won’t be long before Brooke sees it and realizes exactly who would have uploaded it to the digital picture frame feed.

Of course, it was Quinn Forrester (Rena Sofer) who was responsible for the video making its way onto the digital feed. Quinn basically stole the video from Shauna Fulton (Denise Richards) and decided to use it to pay Brooke back for all of the terrible things that Brooke said and did to her.

But could Quinn end up suffering as a result of her actions, perhaps more than Brooke will ultimately suffer?

We think there’s a good chance that Quinn might end up pretty unhappy with how things end up playing out in the aftermath of the video going public. According to B&B spoilers, that video is going to be seen by pretty much everyone in attendance at Brooke and Ridge Forrester’s (Thorsten Kaye) reunion party.

Clearly, Ridge is going to be livid when he sees the video, as will Katie Logan (Heather Tom), and Brooke will surely suffer the consequences in the short term.

But what about in the long term? It seems like Quinn could be the one to end up crashing and burning in the end. Consider this scenario – what if Brooke does lose Ridge over this video and Ridge decides that he’s better off with Shauna?

That would be a short-term victory for Quinn, but what about Quinn’s relationship with Eric Forrester (John McCook)?

There’s a very good chance that Eric is going to realize exactly how that video ended up on the digital feed, and if that happens, then there’s probably a good chance that we’ll see some serious problems between Eric and Quinn.

We all know that Eric had a soft spot when it comes to Brooke, and he’ll probably be livid to learn that Quinn plotted against Brooke in this way.

What if Quinn’s plan ultimately causes the destruction of her marriage to Eric? And if Ridge is off with Shauna, then that would leave Brooke wide open for…Eric! Quinn’s big plan to stick it to Brooke could result in Eric and Brooke getting closer, or even becoming a couple again. And that would leave Quinn alone and miserable.

We’ll see what happens here, but something tells us that Quinn and Eric aren’t going to be ok when it finally comes out that Quinn uploaded the video to the digital feed. Quinn could lose everything, and Brooke could come out ahead in this scenario, even having HER portrait up on the wall of the Forrester mansion!

Do you think that Quinn will end up losing Eric over her actions? Keep watching the Bold and the Beautiful and remember to keep CDL bookmarked for the latest B&B news. We’ll keep you updated with all the latest spoilers as they come in.