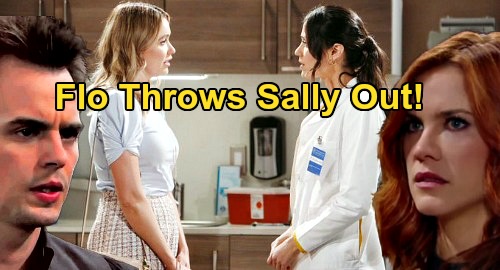 The Bold and the Beautiful (B&B) spoilers tease that Flo Fulton (Katrina Bowden) will have another reason to be suspicious soon. Sally Spectra (Courtney Hope) will decide to butter Flo up and hopefully throw her off the trail. Of course, Flo may feel like Sally’s putting on an act. She’ll at least find this sudden push to be nice to her awfully bizarre.

Sally will grow increasingly nervous about how close Flo’s getting to the real story. As Flo rattles Dr. Penny Escobar (Monica Ruiz) and searches for clues, Sally will definitely worry about her secret exploding.

However, Sally will just keep telling herself to stick to the plan. She’ll try to keep Penny’s mouth shut and be extra sweet to Flo in hopes of shutting her down.

Despite Sally’s best efforts, her scheme will start to unravel, Flo’s only going to become more and more convinced that something’s off here. There’s no way Flo will be able to let this go.

Once Flo digs around a bit more, she’ll eventually feel certain that some sort of plot’s in motion. Although Flo may not have all the facts, she may know enough to realize Wyatt Spencer’s (Darin Brooks) being taken for a ride.

Flo may want Wyatt to take a step back from the situation while she nails down the truth. Sally’s just going to keep reeling Wyatt in if she’s allowed to continue. With that in mind, Flo will make a shocking suggestion during the week of April 6-10.

The Bold and the Beautiful spoilers say Flo will think Sally should move out, but it doesn’t look like she’ll reveal exactly why. Obviously, Flo’s news will leave Wyatt taken aback. Why would Wyatt kick out the dying woman that he pledged to support?

B&B spoilers say Wyatt should think Flo’s stance is harsh under the circumstances. He may even accuse Flo of being jealous and argue that she needs to suck it up for Sally’s sake.

Wyatt may wonder if Flo expects him to just throw Sally out in the street when she needs him most. None of this will make any sense to Wyatt at all, but will Flo be willing to divulge her suspicions?

Will Flo admit she believes Sally is faking her terminal illness? Flo may not be ready to do that until she collects all the evidence she needs and can take Sally down.