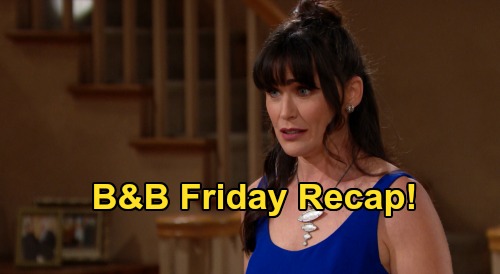 The Bold and the Beautiful spoilers recap for Friday August 21, reveal that Brooke Logan (Katherine Kelly Lang) and Ridge Forrester (Thorsten Kaye) reveled in their reunion. Brooke said that all Ridge needed to do now was annul the marriage to Shauna Fulton Forrester (Denise Richards) and send Shauna back to the desert where she belongs. Brooke wondered if Shauna would refuse to sign the papers, but Ridge didn’t think so.

Ridge then took the opportunity to blast Bill Spencer (Don Diamont), saying that Shauna wasn’t one to take advantage of people when they’re vulnerable, like Bill did. Brooke defended Bill a bit, which Ridge didn’t appreciate, and Ridge wondered if there were any lingering feelings between Brooke and Bill.

Brooke insisted that any feelings she had for Bill were in the past. Ridge decided to take off and go see Shauna about the annulment.

At the Forrester mansion, Quinn Forrester (Rena Sofer) and Shauna spoke about Shauna’s visit with Flo Fulton (Katrina Bowden), then they were rehashing how Shauna impersonated Ridge and told Carter Walton (Lawrence Saint-Victor) to file the divorce papers when Eric Forrester (John McCook) entered the room.

Eric walked in just in time to hear Quinn say that Shauna should enjoy her new status as Mrs. Ridge Forrester.

Eric was polite with Shauna, but he was insistent that Ridge would never give up on Brooke, and that Ridge was with Brooke at that moment begging for her forgiveness.

Eric said that he didn’t want to hurt Shauna, but that Ridge and Brooke always found their way back to each other. Eric took off, and Quinn said that it was time to bring in someone who can throw a wrench into any Brooke/Ridge reunion.

At Spencer Publications, Bill talked with Liam Spencer (Scott Clifton) in his office. Liam had brought Kelly Spencer (Colette and Avalon Gray) by to see Bill, and Kelly was now in another room with Wyatt Spencer (Darin Brooks).

Bill asked about how Steffy Forrester (Jacqueline MacInnes Wood) was doing, and Liam said that there was still a lot of residual pain.

After hanging up, Liam took off, and Justin Barber (Aaron D. Spears) walked in and wondered what was on Bill’s mind. Bill said that he was worried about Steffy, and Justin asked if Bill had any luck getting through to Katie Logan (Heather Tom). Bill said no.

Justin then inquired about Brooke, wondering if Bill thought he had a future with her. Justin then dropped the news on Bill that Brooke and Ridge’s marriage was over.

Bill wondered if Justin was sure, and Justin said that Carter had filed divorce papers on Ridge’s behalf. Bill thought that was fantastic for Brooke, and Justin said there was even more news. Just then, Quinn barged in, saying that she came bearing good news.

“Let me guess – it’s about Ridge and Brooke,” Bill said. Quinn then dropped the bomb that Ridge married Shauna, which took Bill by surprise. “Once again, Forrester proves he’s not worthy of Brooke,” Bill said. “Maybe she’d get the message about that if someone worthy of her were to point that out to her convincingly enough,” Quinn suggested.

Later, after Justin left, Bill asked Quinn what her agenda was. Quinn laid out all her negative feelings about Brooke and said that Brooke was now available to Bill again.

ill seemed to listen intently to Quinn, as he flashed back to some of his romantic memories with Brooke. Quinn urged Bill to go to Brooke’s place and tell her that he loves her…or else Ridge would pull her back in. “Claim what should have been yours all along. You need to go to Brooke!” Quinn said.

At the cliff house, Liam arrived and immediately noticed that Steffy was in serious pain. Steffy said that the doctor prescribed a refill on her pain meds, so she was going to go pick it up.

Liam said that he thought Steffy was done with the pain meds, and Steffy explained that the over-the-counter pain relievers weren’t working. Liam said that Steffy was in too much pain to go, so he agreed to pick up her prescription.

After Liam returned, Steffy thanked him for getting the prescription and for helping so much with Kelly. Liam wondered about the doctor refilling Steffy’s prescription, thinking it was surprising since they “don’t usually do that.”

Steffy said that her doctor knew what he was doing, and Liam urged Steffy to be careful and follow the instructions. Steffy took a pain pill.

That was a great episode of B&B, and there’s more coming next week, so stay tuned! We’ll give you updates as more B&B news comes in. Remember to keep CDL at the ready so you don’t miss any of the latest Bold and the Beautiful spoilers, updates, and news.