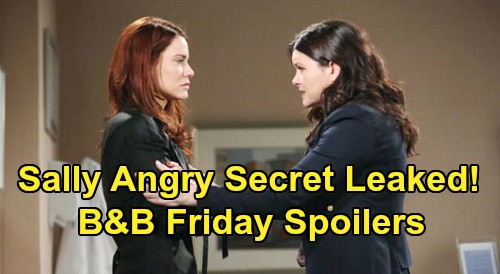 The Bold and the Beautiful spoilers for Friday, February 28, tease that Bill Spencer (Don Diamont) will offer some surprising words to Flo Fulton (Katrina Bowden). As B&B viewers know, Flo just told Katie Logan (Heather Tom) that she was stepping aside to let Wyatt Spencer (Darin Brooks) ask Sally Spectra (Courtney Hope) to move back in with him.

Of course, Flo and Wyatt really want to be together, but they’re willing to put their happiness on hold for the time being, so that Wyatt can be there for Sally in her time of need.

Katie was really impressed with Flo’s willingness to put Sally’s needs first, and she’s seeing what Wyatt has known for many years – that Flo is a good, compassionate person who doesn’t mind putting other people’s needs above her own.

Well, it seems that Bill will also get wind of what Flo and Wyatt have planned for Sally. It looks like he’ll come upon Flo and Katie talking, and he’ll get updates on Wyatt’s plan to reunite with Sally and temporarily deny his feelings for Flo.

He’ll realize what a big sacrifice Flo is making here, and B&B spoilers say that he’ll pay Flo a surprising compliment in front of Katie.

Of course, this will be a big deal for Bill, since he’s been harboring negative feelings toward Flo ever since Flo participated in Reese Buckingham’s (Wayne Brady) baby swap and adoption scam.

Bill’s had a tough time forgiving Flo for helping to steal his granddaughter Beth Spencer (River Davidson and Madeline Valdez), even when Flo turned out to be the person who donated her kidney to Katie.

But perhaps now that Flo is engaging in a pattern of selfless behavior, he’ll acknowledge that Flo is a decent person, and that she’s moved on from the big mistake she made in getting involved with Reese and in the illegal adoption of Beth to Steffy Forrester (Jacqueline MacInnes Wood). That would be a big step for Bill, and it would surely do Katie’s heart some good to see Bill and her niece getting closer.

Next, on the new episode of B&B on Friday, February 28, it looks like Sally will be feeling a little suspicious of Katie. As B&B viewers know, Wyatt has just told Sally that he loves her and that he wants her to move back in with him.

It appears that we’ll see Sally’s reaction to this proposal on Friday’s episode. Will Sally agree, or will she need some time to think about Wyatt’s loving offer?

We’ll see that happens there, but B&B spoilers say that after her conversation with Wyatt, Sally will meet back up with Katie, and she’ll have a few pointed questions for her friend.

It seems that Sally will be suspicious about whether Katie told Wyatt about her illness, and she’ll grill her about that. That should put Katie in a pretty tough spot. But it looks like Katie will continue to maintain the lie that she hasn’t said anything to anyone about Sally’s terminal condition.

After all, the most important thing to Katie right now is that Sally gets the support that she needs from Wyatt, and she wouldn’t want to jeopardize that by spilling to Sally that she told Wyatt the truth. So it appears that Katie will do her best to keep Sally believing that Wyatt doesn’t know about her condition.

Of course, Katie doesn’t seem like the best liar in the world, so it could get pretty difficult for her to maintain the lie with Sally peppering her with questions and accusations. And ongoing B&B spoilers for next week say that Katie will eventually slip and say something that leads Sally to strongly suspect that Katie spilled the beans.

We’ll see how long Katie, and therefore Wyatt, can keep up charade that Wyatt doesn’t know – and one wonders how Sally will react when she eventually discovers that Wyatt knows the truth.

It looks like the action is revving up for Friday’s episode, so be sure to stay tuned! We’ll give you updates as more B&B news arises. And don’t forget to check CDL often for the latest Bold and the Beautiful spoilers, recaps, and news.