BY hellodrdavis on February 6, 2020 | Comments: one comment
Related : Soap Opera, Spoiler, Television, The Bold and the Beautiful 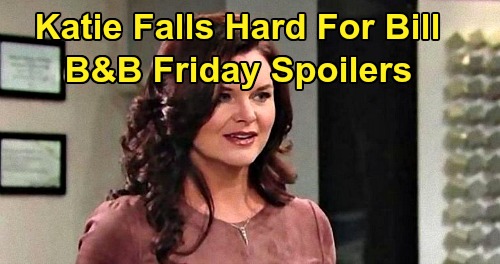 The Bold and the Beautiful spoilers for Friday, February 7, tease that Katie Logan (Heather Tom) will find herself feeling happy and content. As B&B viewers know, she’s just recently back up and around after fully recuperating from her kidney transplant surgery late last year.

Although much of this has happened off-screen, it seems pretty clear that Bill Spencer (Don Diamont) and Will Spencer (Finnegan George) have been attentive to her needs and have helped her with her recovery, which she surely appreciates.

The Bold and the Beautiful spoilers indicate that Katie will spend some time with Bill on Friday’s episode, and that she’ll be really taken in by Bill’s attentive behavior. Of course, B&B viewers know that Bill is still in the throes of demonstrating his “new Bill” persona that he adopted last year.

He’s really seemed to make an amazing turnaround, having ditched the lying, scheming persona that got him into so much trouble with sons Wyatt Spencer (Darin Brooks) and Liam Spencer (Scott Clifton) in the past.

We’ll see exactly what Bill does, but B&B spoilers are clear that Katie will be quite happy with the attention and devotion that Bill exudes as they’re together.

Of course, Katie will probably be feeling quite worried about Sally Spectra (Courtney Hope) throughout all of this, since she knows that something pretty serious is going on with Sally’s health.

It might once again remind Katie that life is precious and that she herself has gotten a reprieve and is lucky to be spending this time with Bill and Will.

Meanwhile, on the new episode of B&B on Friday, February 7, Wyatt will decide to take matters into his own hands. As B&B viewers know, he’s been trying to reach out to Sally for several days now, but she’s been “busy” and not responding to him. Wyatt surely feels like they’re in limbo, since he tried to break up with her and she basically refused. He’d probably like to know where he stands at this point.

And also, Wyatt feels horrible about what Sally’s going through. He knows that he hurt her terribly when he told her that he was breaking off their engagement so he could rekindle his relationship with Flo Fulton (Katrina Bowden).

But Wyatt has no idea that Sally is going through a health crisis, nor that she’s awaiting test results that will determine why she’s been shaking, having dizzy spells, nearly fainting, and not thinking straight.

According to The Bold and the Beautiful spoilers, Wyatt will head to Forrester Creations to talk with Sally and check on her well-being. He’ll apparently figure that if she won’t return his messages, then he needs to check up on her, but when he arrives, it looks like Sally won’t be receptive.

The Bold and the Beautiful spoilers say that Sally will promptly shut Wyatt down when he arrives wanting to offer his support and see how she’s doing.

Of course, whether Sally will have received the results from her tests at that point remain to be seen. According to B&B spoilers, Sally will soon be receiving a devastating life-threatening diagnosis that will change the course of her life dramatically.

But whether she has received the diagnosis at the point when Wyatt comes to see her, or whether she’s just waiting for results, she won’t be in the mood to deal with him.

And this will probably worry Wyatt even more. He’ll likely be more confused and concerned than ever as Sally shuts him down and sends him on his way. He’ll be simultaneously concerned about Sally and wanting some resolution to the status of their relationship.

However, Wyatt’s apparently not going to succeed in either hearing from Sally that she’s going to be ok or getting the all clear to move on with his life.