The Bold and the Beautiful Spoilers: Friday, January 17 – Brooke & Quinn Brawl Drags Eric In – Wyatt Tries To Break Up With Sally

BY Annemarie LeBlanc on January 16, 2020 | Comments: one comment
Related : Soap Opera, Spoiler, Television, The Bold and the Beautiful 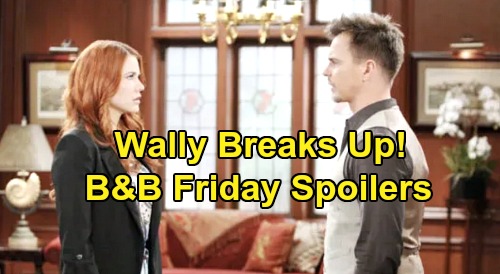 The Bold and the Beautiful spoilers for Friday, January 17, tease that things have really gotten out of hand between Brooke Forrester (Katherine Kelly Lang) and Quinn Forrester (Rena Sofer). As B&B viewers know, Brooke and Quinn were in the middle of an angry shouting match in the Forrester living room, and Shauna Fulton (Denise Richards) entered and everything blew up.

Totally outnumbered, Brooke persisted with her tirade against Quinn and Brooke. With a crazed look in her eyes, she hurled insults toward Shauna, saying that she was beneath Ridge Forrester (Thorsten Kaye) and that it was disgusting that Ridge and Shauna had kissed.

When Shauna defended herself, Brooke viciously slapped Shauna, then Quinn hauled off and slapped Brooke right back, nearly knocking her to the ground.

Well, on Friday’s episode, Eric Forrester (John McCook) will get pulled into the argument. It looks like he may return to the mansion, and if he does, he’s going to find a horrible scene.

But that may be easier said than done, since Brooke and Quinn have just declared war on each other. This is a feud that’s been building ever since Quinn and Ridge had their dalliances several years ago.

They just kissed a few times, but all of the anger that Brooke had about that has just bubbled up to the surface in a big way. Something tells us that Eric is in for a real challenge as he gets in the middle of this mess.

Meanwhile, on the new episode of B&B on Friday, January 17, Wyatt Spencer (Darin Brooks) will return home after Katie Logan’s (Heather Tom) big meeting. As B&B viewers know, Katie asked her family, including Wyatt, to forgive Flo Fulton (Katrina Bowden), and Wyatt finally resolved his feelings about Flo’s lies and deception. He told Flo that he believed that she was remorseful and that he forgave her.

But that wasn’t all. Wyatt also confessed to Flo that he never stopped loving her, and the two happily kissed and seemed like they were on the path to a very real reunion. However, this doesn’t at all bode well for Wyatt’s relationship with Sally Spectra (Courtney Hope).

It looks like Wyatt will head home with the intention of breaking up with Sally and revealing that he’s still in love with Flo.

The Bold and the Beautiful spoilers indicate that Wyatt will have a tough time breaking things off with Sally. Of course, a breakup is difficult enough under normal circumstances, but Sally will unknowingly make it very hard for him to tell her that he wants out of the relationship. She’ll apparently be dressed in slinky lingerie when Wyatt arrives and will have a romantic evening planned for the two of them.

As B&B viewers know, Sally has had a difficult time at Forrester Creations lately, with both Ridge and Steffy Forrester (Jacqueline MacInnes Wood) expressing displeasure with her designs.

Sally is deeply worried about being fired, and according to B&B spoilers, she’ll decide to put Wyatt before her career, which will probably be what her special evening for the two of them is all about.

Well, this will make Wyatt feel terrible, but it looks like he’ll go ahead and launch into his spiel about why he and Sally need to call it quits. And given that B&B spoilers say that Sally will soon be facing a life-threatening illness, this will be horrible time for Wyatt to do this to Sally.

Of course, he won’t know that Sally will be facing a health crisis soon, but this all spells real tragedy for Sally, since she stands to lose Wyatt, her job, and her health all in short order.