BY Annemarie LeBlanc on March 19, 2020 | Comments: one comment
Related : Soap Opera, Spoiler, Television, The Bold and the Beautiful 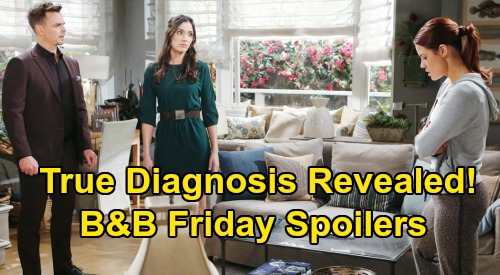 Well, on Friday’s episode of B&B, Eric Forrester (John McCook) will inadvertently give Quinn a better way to use that video to her advantage and to knock Brooke down a peg.

It appears that Eric will tell Quinn all about the reunion present that Ridge gave to Brooke. As B&B viewers know, Ridge presented Brooke with a digital picture frame, and he said that he filled it with a stream of pictures of their life together.

Moreover, Ridge went the extra mile and emailed a link of the photos to all their family and friends, which is probably what Eric will share with Quinn on Friday’s episode. Quinn should be pretty happy to learn that she now has a very public platform on which to share the “Brill” kiss video, and it also seems that she’ll realize that timing is everything.

It appears that Eric will also share with Quinn that Brooke and Ridge will be planning a party to commemorate their reunion. According to B&B spoilers, this will be a party that even Bridget Forrester (Ashley Jones) will attend, so it will be a big deal.

Katie Logan (Heather Tom) and probably even Bill will be present for the shindig, and ongoing B&B spoilers indicate that Quinn will see to it that the video gets uploaded and that everyone has access to seeing it at the party.

At any rate, it seems that this impending disaster will be put into motion on Friday’s episode, and Quinn will make her plan. Of course, this is going to potentially destroy two relationships – both “Bridge” and “Batie” will probably be on the rocks once everyone sees Bill and Brooke’s lip lock.

Meanwhile, on the new B&B episode on Friday, March 20, Wyatt Spencer (Darin Brooks) will have to do some serious acting in front of Sally Spectra (Courtney Hope).

As B&B viewers know, Sally has just told Wyatt that she’s sick and that she’s dying. Wyatt did his best to look surprised, and he’ll likely continue the ruse that he’s hearing all of this for the first time.

Of course, as B&B viewers know, Sally was essentially forced to tell Wyatt the truth since Dr. Penny Escobar (Monica Ruiz) came to the beach house and was there when Wyatt showed up.

Well, according to B&B spoilers, Sally is not going to be at all happy with Dr. Escobar for forcing her hand and causing her to reveal her news to Wyatt. Apparently, an argument will ensue between Sally and Dr. Escobar, and things will get pretty heated.

Now, whether Wyatt remains present during that argument remains to be seen, but B&B spoilers say that as Sally and Dr. Escobar are in the heat of their argument, the devastating truth about Sally will be revealed. Does that mean that viewers will finally learn exactly what Sally was diagnosed with?

It certainly sounds like that will be the case, so B&B viewers will want to tune in to see all the action! Stay tuned and don’t miss a thing on Friday’s episode. We’ll be sure to let you know as we hear more Bold and the Beautiful spoilers and news. And remember, CDL is your trusted source for everything B&B.