BY hellodrdavis on March 5, 2020 | Comments: one comment
Related : Soap Opera, Spoiler, Television, The Bold and the Beautiful 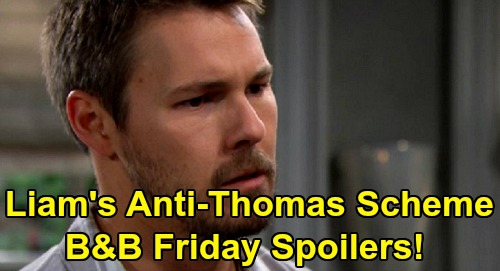 The Bold and the Beautiful spoilers for Friday, March 6, tease that Liam Spencer (Scott Clifton) will reel over what Steffy Forrester (Jacqueline MacInnes Wood) has just revealed to him. As B&B viewers know, Steffy has just confessed to Liam that Thomas Forrester (Matthew Atkinson) orchestrated their kiss on the cliff – the kiss that Hope Logan (Annika Noelle) witnessed. That kiss was pivotal, since it caused Hope to break off her relationship with Liam and led Liam to move back into Steffy’s house.

Well, Liam’s going to be pretty peeved over this development, and B&B viewers can expect him to rant and rave a bit out of sheer anger. He’ll be understandably furious with Thomas, and likely with Steffy too. But chances are, he’ll quickly realize that Steffy has been wrecked with guilt over what she did, and over how she got tied up in Thomas’ manipulation.

Once he gives it some thought, Liam will probably see that Thomas manipulated Steffy’s feelings about having him around for Kelly Spencer (Avalon and Colette Carlish). It looks like he’ll soon forgive Steffy and will focus most of his rage on how Thomas has manipulated and caused heartbreak in his life yet again. And from here, things should start to get interesting.

The Bold and the Beautiful spoilers say that Thomas’ web of deceit will start to unravel on Friday’s episode. It seems that Liam and Steffy might put their heads together and decide that it’s time for them to take down Thomas once and for all.

Ongoing B&B spoilers indicate that Steffy will eventually apologize to Hope and tell her in no uncertain terms that Thomas is still obsessing over her and manipulating to get her into his life.

And from there, B&B spoilers say that Liam, Hope, and Steffy will end up hatching a plan to expose Thomas for the liar and manipulator that he is. We should see the beginnings of this plan start to formulate on Friday’s episode, as Liam comes to terms with what Steffy did, then refocuses his efforts on totally destroying any chance that Thomas has to worm his way into Hope’s life again. And Steffy will surely want to help with that effort.

Meanwhile, on the new episode of B&B on Friday, March 6, Shauna Fulton (Denise Richards) will find herself worrying about her possible future with Ridge Forrester (Thorsten Kaye).

It looks like the news will have spread about Thomas and Zoe Buckingham’s (Kiara Barnes) upcoming nuptials. Perhaps Quinn Forrester (Rena Sofer) will fill Shauna in Thomas’ proposal to Zoe and his plans for a quick wedding.

At any rate, Shauna will start to see the writing on the wall. She knows that the main issue between Brooke Forrester (Katherine Kelly Lang) and Ridge has always been Thomas and Brooke’s animosity toward him for what he did to Hope.

It seems that Shauna will realize that if Thomas and Zoe get married and live happily ever after, then that might cause Brooke to let go of her animosity and concern over Thomas.

B&B spoilers say that Shauna will worry that “Bridge” will reunite after Thomas and Zoe get married, which would mean that her shot with Ridge is over. Shauna’s been pretty patient thus far, and it doesn’t seem like she’s been pressuring Ridge or making moves on him during this time when his marriage to Brooke is in limbo. She’s been respectful of his situation and of his feelings, and it looks like she’ll continue to do so, despite her worries about a possible “Bridge” reunion.

There’s certainly a lot of B&B drama coming our way on Friday’s episode, so stay tuned! We’ll provide updates as more B&B news arrives. Stick with the CBS soap, and check CDL often for the latest Bold and the Beautiful updates and spoilers.