The Bold and the Beautiful Spoilers: Friday, May 8 – Hope & Liam Marry In Italy – Steffy Watches From Afar, Then Falls In The Water

BY hellodrdavis on May 7, 2020 | Comments: Leave Comments
Related : Soap Opera, Spoiler, Television, The Bold and the Beautiful 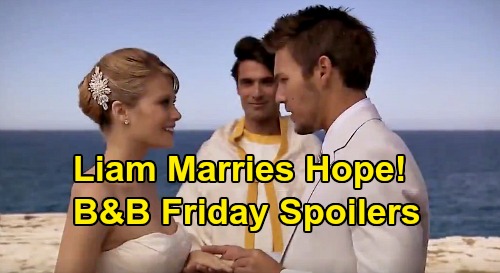 The Bold and the Beautiful spoilers for Friday, May 8, tease that viewers will see an episode that originally aired on June 26, 2012. The episode will begin with Hope Logan (Kim Matula) and Liam Spencer’s (Scott Clifton) wedding ceremony taking place. The officiant will say a few words, then he’ll ask if anyone cares to speak. Ridge Forrester (Ron Moss) and Brooke Forrester (Katherine Kelly Lang) will speak as Hope’s parents.

Ridge will say that even though he had not been supportive of Hope’s marriage, that she had his full support. Ridge will go onto say that he is honored to be a part of Hope’s life and to have raised her from the time she was a little girl. Brooke will say that she couldn’t have chosen a more wonderful man for Hope, and that Liam has wonderful qualities that would serve him well in married life.

Bill Spencer (Don Diamont) will also speak and he’ll apologize to Hope for not supporting their marriage before. Bill will say that he will love Hope as his daughter, and that for a long time, he thought that he and Liam were too good for Hope. But Bill will note that it might just be the other way around.

Speaking of Steffy, she’ll be in the Italian village all droopy as she sits in a cafe. Steffy will remember her wedding to Liam in Aspen, and soon Stephanie will call her to check in. Steffy will reveal that Liam and Hope’s wedding had been delayed but that it was taking place right now. Steffy will tell Stephanie that she and Liam had almost reconnected, and as they’re talking, Steffy will see the wedding off in the distance.

Back in Italy, Hope and Liam will exchange vows, then rings, and the officiant will pronounce them husband and wife. Music will play, and the crowd standing around the ceremony will sing Volare, which is a song to signify saying goodbye to one’s old life and hello to the new life. Liam, Hope, Bill, Ridge, and Brooke will celebrate with the crowd.

Over in the distance, Steffy will watch the festivities from a balcony, and then she’ll move to a seat along the water. Steffy will slip and fall into the water, but she’ll be ok. Steffy will exclaim about what a horrible day it has been, and she’ll swim to the water’s edge, with the crowd at the wedding still singing.

That was a wonderful encore episode of the Bold and the Beautiful! There will be more great episodes next week, so be sure to stay tuned! We’ll give you updates as more B&B news comes in. And stick with CDL for the latest B&B spoilers, updates, and news.