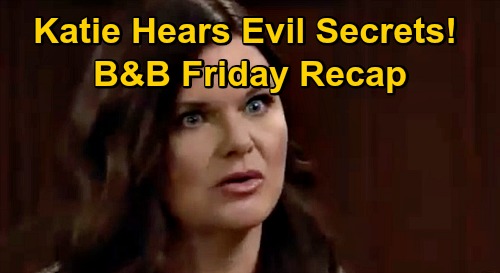 Eric assumed that Ridge was trying to distract himself from the wedding, and Ridge didn’t want to talk about it. Ridge shared that he went to see Steffy Forrester (Jacqueline MacInnes Wood) in rehab and that Thomas Forrester (Matthew Atkinson) was with her now.

Soon, Carter Walton (Lawrence Saint-Victor) walked in and together he and Eric quizzed Ridge about whether Ridge was having second thoughts. Ridge shut the conversation down, and after Eric and Carter left, Ridge looked at photos of himself and Brooke Logan (Katherine Kelly Lang) and reminisced about some of the great times that they have had.

Over at Brooke’s place, Brooke lamented to Donna Logan (Jennifer Gareis) about how Ridge was being manipulated into this wedding by Quinn Forrester (Rena Sofer) and Shauna Forrester (Denise Richards).

Brooke was beside herself, and she blamed herself for starting all of this by kissing Bill Spencer (Don Diamont). Donna urged Brooke not to beat herself up.

Over at the Forrester mansion, Quinn and Shauna talked via video call. Quinn gushed about the wedding preparations as Shauna was getting ready for the ceremony off-site.

Shauna complained about all the lies and manipulations, but Quinn said that it was just nerves. As Quinn and Shauna rehashed the whole story about how Quinn told Shauna to take Ridge’s phone and get Carter to file the divorce papers, someone unseen listened at the door leading to the kitchen.

Quinn went on and on, dissing Brooke and detailing how Shauna sent Carter the text and then practically dragged Ridge to the wedding chapel.

After considerable back and forth between Quinn and Shauna about what they did with nothing left unsaid, viewers saw that the person eavesdropping in on the conversation was Katie Logan (Heather Tom).

Katie was about to confront Quinn when Eric came down the stairs. Katie went back into the kitchen and hid, while Eric asked who Quinn was talking to on the phone. Quinn said that it was Shauna, and that Shauna felt bad for Brooke today. Eric said that he was impressed with Shauna for that, but that he knew Quinn didn’t agree.

Eric said that he knew that Quinn’s dark side had taken a backseat for the past couple years. However, he did warn Quinn about her bad side coming back.

“I’m afraid that this animosity you have toward Brooke could drag you back down,” Eric said. “I would hate to think of you taking pleasure in it.” Quinn just stood there silently.

At Spencer Publications, Wyatt Spencer (Darin Brooks) and Flo Fulton (Katrina Bowden) got dressed for the wedding ceremony. Flo gushed about how she couldn’t wait to see her mom on her wedding day. Flo thought that her mom would be glowing, and that she deserved everything coming to her today.

In the Forrester design office, Carter and Zoe Buckingham (Kiara Barnes) talked about how the wedding would be their big debut as a couple. Zoe was proud to be on the arm of the new Forrester COO.

Zoe wondered if Carter had seen Katie, and he said that she had gone to drop something off at Eric’s place. Carter then lamented about whether the wedding would actually happen, since it didn’t seem like Ridge wanted to go through with it.

Back in the Forrester CEO office, Katie entered, happy to have found Ridge there. “Thank God you’re still here,” Katie said. Ridge then started rambling about the wedding and he finally said that he couldn’t go through with it today.

Katie said, “No you can’t. You need to know the truth about what happened that night.”

That was a great episode of B&B, and a great way to end the week! We’ll be sure to give you updates on B&B news throughout the weekend. Stick with the CBS soap and don’t forget to check CDL frequently for the latest Bold and the Beautiful spoilers, daily episode recaps, and news.