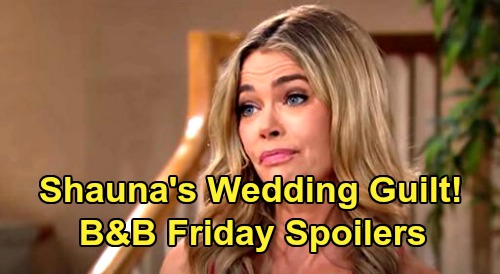 The Bold and the Beautiful spoilers for Friday, October 2, tease that it will be a big day for Ridge Forrester (Thorsten Kaye) and Shauna Forrester (Denise Richards). As B&B viewers know, Quinn Forrester (Rena Sofer) pushed the issue and got Ridge to agree to participate in a do-over wedding ceremony to Shauna at the Forrester mansion.

Quinn’s goals here are two-fold: She wants to solidify Ridge and Shauna’s union, and she wants to stick it to Brooke Logan (Katherine Kelly Lang).

Well, Ridge and Shauna’s wedding day will probably kick off with some major angst on Shauna’s part. Shauna has been feeling iffy about the wedding ceremony ever since Quinn suggested it.

Shauna’s still feeling terribly guilty about how her first wedding to Ridge in Las Vegas came to be. Shauna even suggested to Quinn in a recent episode that perhaps she should confess what she and Quinn did to Ridge and hope that he somehow understands.

Of course, Quinn thought that was a terrible idea, and she swore Shauna to secrecy. If the news about how Quinn and Shauna manipulated Carter Walton (Lawrence Saint-Victor) into filing Ridge and Brooke’s divorce papers gets out, then Quinn is going to be in loads of trouble with Eric Forrester (John McCook), and her marriage could even be on the line.

At any rate, B&B spoilers are clear that this wedding isn’t going to go off without a few hitches – and in fact, it doesn’t look like the wedding will ultimately happen.

As the wedding day kicks off on Friday, look for Shauna and Quinn to have more tense discussions, during which Shauna vacillates from being happy and excited about the wedding to feeling guilty over how she and Ridge came to be married in the first place.

Will one of Quinn and Shauna’s conversations be heard by someone? It would be fitting if, for example, Brooke were to overhear a conversation and somehow managed to record it on her phone.

Quinn could be totally busted over how she orchestrated Brooke and Ridge’s divorce, especially if Brooke decides to play the recording for all the wedding guests to hear.

Or will there be some other sort of bombshell that will be dropped? B&B spoilers for Friday, October 2nd indicate that a mysterious person will hold the fate of many in his or her hands.

But who will this person end up being? One possibility is that the man who officiated the wedding in Las Vegas could turn up – that person was supposedly a friend of Shauna’s, and B&B viewers will remember that Shauna strong-armed him into marrying her and Ridge when Ridge was drunk.

Donna Logan (Jennifer Gareis) was acting pretty sneaky on a prior episode, as she ran off to get coffee with someone and didn’t tell Brooke what she was doing.

Could perhaps Donna have tracked down the wedding officiant and offered him money or some other incentive for turning on Shauna and coming forward with how Shauna finagled her marriage to a stumbling drunk Ridge?

We’ll see what happens here, but it looks like some big bombshells are coming, and that it will all start to unravel for Shauna and Quinn on Friday’s episode.

We’re probably in for a major cliffhanger at the end of the episode, as B&B spoilers indicate that the wedding day will continue as the action picks up again during the week of October 5th.

Friday’s episode of B&B sounds terrific, so you won’t want to miss it! We’ll be sure to give you updates as more B&B news comes in, and we’ll keep you current on all the latest Bold and the Beautiful spoilers and news. Here at CDL, we’ve got you covered!